How Do the World’s Leading Social Brands Succeed on Facebook?

A few weeks ago we cast our eyes over Klout’s top 50 influential brands on social media.

To find out what made these brands tick, we’ve taken the top 10 of Klout’s top 50 and analyzed their presence on Facebook. This data was collected over the last 20 days using Brandwatch Channels.

How do each of these brands use Facebook, and what results do they yield?

Here we’re looking at the some overall insights gained from our analysis; how much the brands are posting, what engagement they received and how their likes grew over time.

Interestingly, there’s no common theme shared between these brands. Despite their rating as Klout’s best of the best, they’ve all adopted very different social strategies.

MTV, for example, post over 25 times a day, whilst Facebook and Google post less than twice a week. This is reflected in the owner comments. McDonald’s and Amazon have posted 3,646 comments, whilst Nintendo and Google have posted none.

To understand exactly how successful these accounts are in comparison to one another, we’ve broken down the average performance of each brand’s posts.

On average, which brand’s posts are performing best? 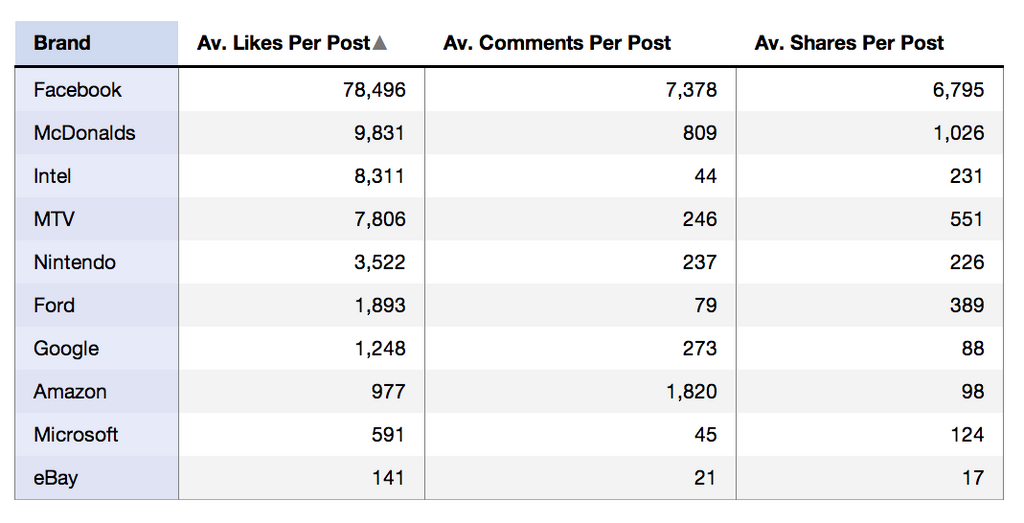 The stand-out point, however, is Facebook’s clear dominance over the other accounts we measured. So, what sort of content were they posting – can we learn anything from it?

Well no, not really.

Their four posts over the last 20 days are all based around how you can use different features on Facebook, e.g. how to edit a post and how to share just with friends. Although the videos they’ve included with each post are simple and well designed the real reason behind Facebook’s success could be far from what content they post.

As Facebook run an algorithmic newsfeed, we can assume they decided exactly how many people see their posts, without having to use the traditional method of paid promotion – their results from this analysis may well be skewed.

Comparing the best of the best 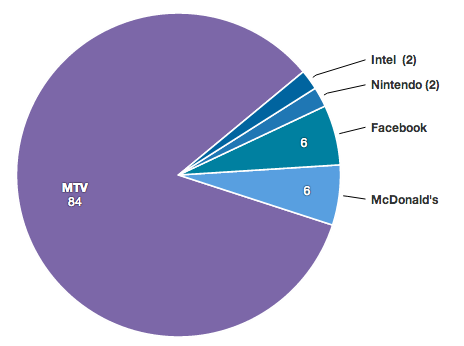 Despite being ranked 3rd on Klout’s top 50, MTV are massively out performing other brands, making up a mammoth 84% of top posts. Their social media strategy is striking a cord with their fans due to two main forms of content:

1/ They post topical articles from their blog about subjects suited towards their target audience. For example: “New Drake mix tape” and “11 celebs who matured in 2014”

2/ Videos they post are short, fast-paced and eye catching. For example: “2014 the year of the butt” and “7 ways to hack your pizza”

Although this strategy won’t match everyone’s taste, it’s hard to question MTV’s impressive use of Facebook. For a brand that has seen a diminishing amount of viewers over the last four years, their social media strategy has re-engaged an audience they were beginning to lose.

The importance of video

MTV may well have struck on a very effective form of content with their use of videos. Facebook’s update seven months ago meant videos automatically play in users newsfeed, giving them a new lease of life on the social network.

In fact, our analysis of over 800 posts from the world’s leading social brands reveals some fascinating insights into the success videos can offer a brand.

Videos are clearly outperforming other types of content on Facebook, and the Klout top 10 brands are taking full advantage of it. 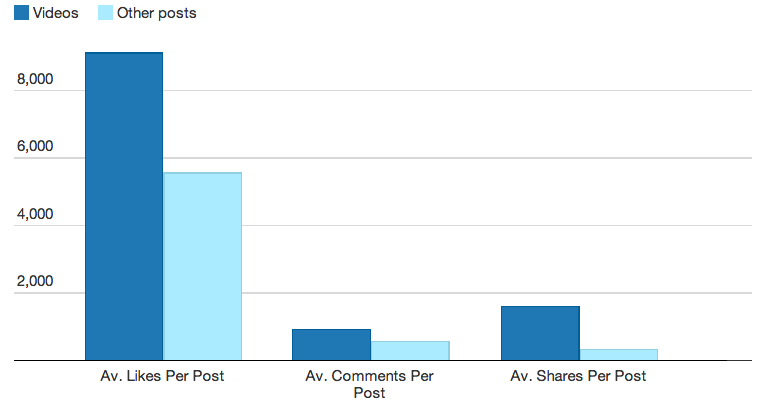 The mirage of success?

One of the problems with conducting Facebook analysis is the lack of information around promoted posts.

Do MTV have a higher social promotion budget than eBay? Are video posts more likely to be promoted due to the time and effort put into creating them? It’s hard to tell.

Fortunately there is a way to estimate the chance a post has been promoted using a social listening tool (I go into more detail about this here) however, when dealing with over 800 posts, this becomes far more difficult.

Nevertheless, no mater how much a brand promotes a post, its success will always depend on how their fans react to it. Targeting the correct audience and serving content they want to see is what separates these brands from the rest.

Want to find data like this for your brand? Book a demo with us and see why thousands of brands use Brandwatch to succeed on social.