Connectivity is King: The Most Important Technologies for 2020 and Beyond

Will 5G really change the world?

It’s the start of a new year, which means the world’s biggest technology show is about to begin once again.

CES in Las Vegas showcases the latest tech about to change our future – and with it comes a giant wave of hype about The Next Big Thing™. So what exactly is the next big thing?

Recent research by Brandwatch delves into the subject matter head-on. When asked to rank the technologies that will be most likely to shape the world this year, unsurprisingly it was renewable energy that featured most frequently in participants’ answers. In an age of abandoned climate accords and globetrotting Scandinavians, the very survival of humanity appears to be dangerously exposed to irreversible changes. I mean, augmented reality is cool, but it won’t be any use to anyone if we’re all dead.

At the other end, the rabid soapboxing of crypto evangelists seem not to have had a huge impact on the average consumer, with blockchain and cryptocurrency voted among the least impactful technologies as we head into a new year.

The biggest reveal of this research instead must surely be the tech that follows renewable energies at the top of the chart: 5G.

Artificial intelligence, self-driving cars and robots may very well change the nature of employment forever, potentially changing society in dramatic and far-reaching ways. But in 2020, it’s 5G that’ll have the bigger impact.

Why 5G will change the world

If we look back to the dawn of 4G, and the promise of 3G before it, we went through stages of intense collective excitement. Each was, in turn, going to revolutionize communication for good, and fundamentally warp civilization in new and unexpected ways.

Sometimes that expectation fell flat – who really cares about autoplay video on Facebook or the emergence of video-first content on Instagram, TikTiok or Snapchat? We’re still largely using the same apps and doing the same things we were before the widespread use of 4G … or are we?

It may not seem like a big change, but faster mobile internet speeds have genuinely transformed how we live. Consider the 2011 ‘Arab Spring’ or more contemporary political movements like those in Hong Kong or Venezuela. These events were literally only possible thanks to smart devices and their ability to connect to reliably fast mobile networks.

In the same timeframe, the way we select romantic partners has irreversibly changed too. Online dating has changed from being an awkward, slightly weird way of meeting someone to essentially the norm – almost half of relationships in 2019 were formed through dating apps. This wouldn’t have happened had reliable mobile connectivity not been available.

Perhaps most profound is how the relationship we each have with work has changed. The new normal is not sat behind a desk working on a desktop PC – instead, our workplace has become a much more fluid environment. Maybe we start the day by checking emails on a tablet connected to home WiFi. We switch to mobile on the commute to work via 4G, before setting up in the office in the more traditional setting. Between client meetings you might take your laptop to the nearby coffee shop and once again switch between devices and networks on an increasingly regular basis.

Workers are more mobile than ever, and the reliance upon high performance networks has never been greater. But research conducted at NetMotion found that the user experience of working on mobile or while connected to mobile networks is often a bit … well, bad. A staggering 41% of respondents reported a host of connectivity issues as their number one workplace frustration. Networks have some catching up to do.

Most frustrating issues for mobile workers 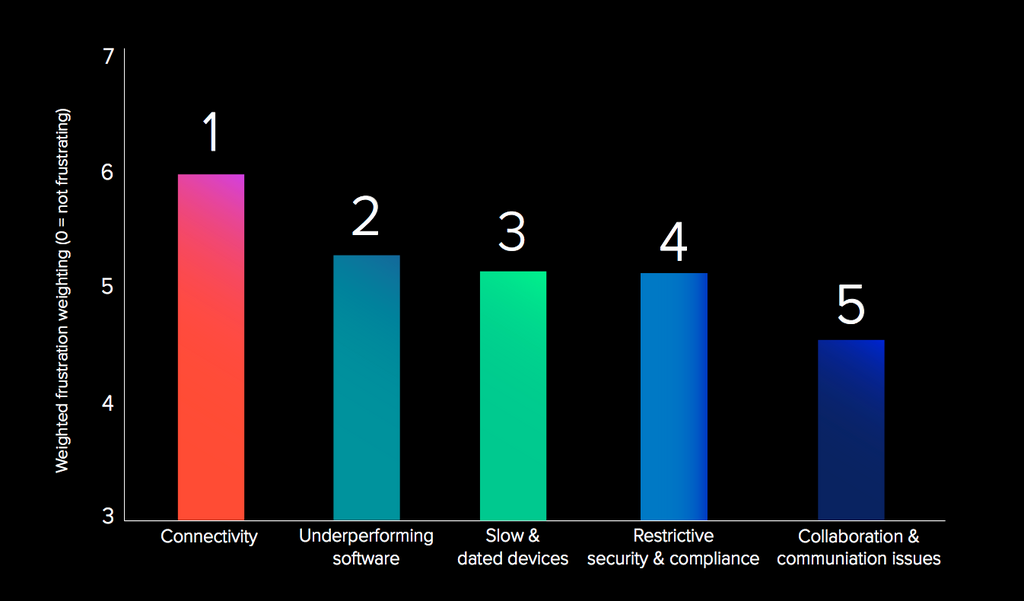 Given this context then, it’s really no surprise to see that 5G was by far the most talked-about technology for 2020 online.

Consumers are, for the most part, employees too. And everyone wants access to robust, rapid internet. What might once have been a luxury is already viewed as something close to a human right.

Moreover, most of the other technologies we’re excited about (everything from AI to the blockchain) ultimately rely on connectivity to work effectively. The world’s greatest devices, most sophisticated software, and breakout innovations all depends heavily on connectivity to actually deliver, and so the advancements of our global networks, such as with 5G, will continue to be at the forefront of what shapes the next generation of our relationship with technology.

Learn about the impact of COVID-19 on shopping behaviors, opinions on telemedicine, consumer anxiety, and much more..