React: What Twitter Thinks of VR Developments in Four Charts

Brandwatch analyzes conversation surrounding virtual reality (VR) on Twitter, including data on the brands drawing the most attention.

In January, we used Brandwatch’s platform to analyze predictions for 2016 on Twitter.

VR came in at fourth on the list of predicted themes for the year, with plenty of people identifying virtual reality as a technology about to make a splash.

They couldn’t have been more right.

With the release and announcements of products from many different brands and sources within months of one another, virtual and augmented technology came, saw, and conquered the current technology market.

This influx of shiny, new technology has resulted in a lot of Twitter excitement. 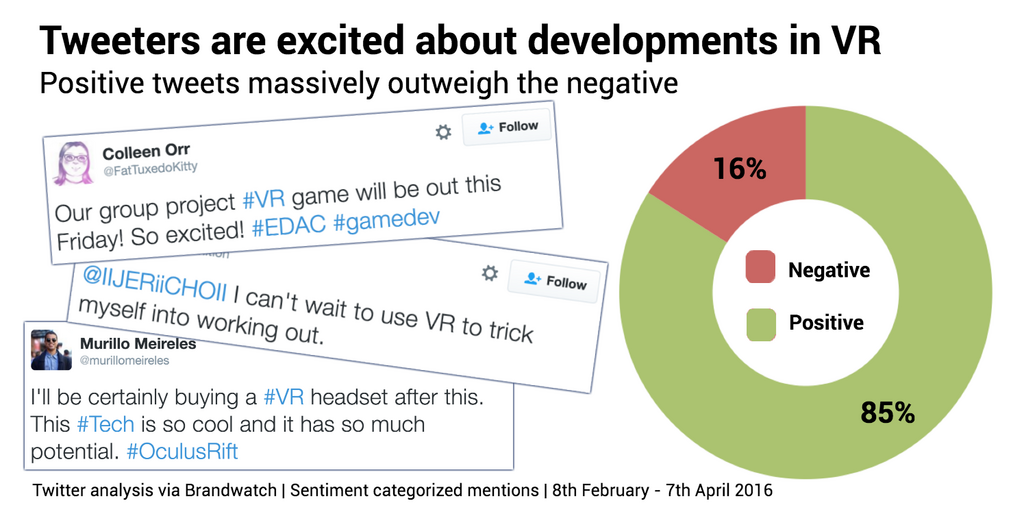 We tracked 120,000 tweets over two months to find out what the conversation was made up of.

Oculus and their VR headset Rift are the most mentioned brand and headset among those talking about virtual reality on Twitter.

Following closely behind, the Samsung Gear, HTC Vive, and Sony Playstation VR respectively have also gotten the attention of many people this year. 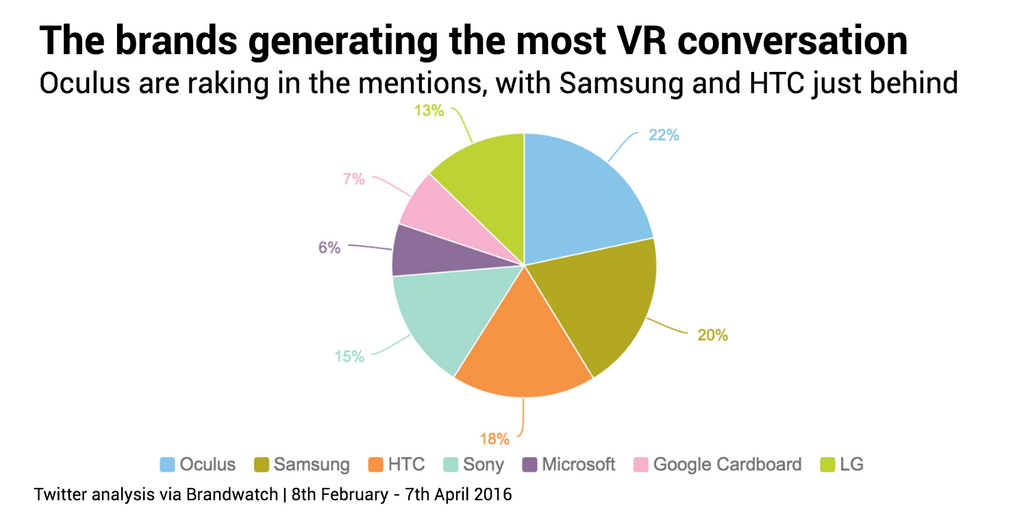 As a result of the general enthusiasm of the markets, most companies are generating more positive and excited conversation than negative conversation.

How long will the success last?

The success of VR has prompted many to wonder if these new technologies will succumb to the same fate as Google Glass.

Google Glass had underwhelming sales and development from its consumers.

If people won’t wear Google Glass, why do we think they’re going to strap an entire cell phone to their heads? Virtual reality meets reality

However, the current conversation on Twitter about virtual reality and its future has brought about much more excitement than it has disappointment or concern. Despite Google Glass being so close in our memory, people are excited to try VR again.

Google Glass was much more like a blank canvas for their “explorers” than a functionally useful tool in itself.

Google hoped that their explorers would develop interesting applications in its early phases, attempting to generate interest from creating possibility.

Unlike Google Glass, companies like Sony, HTC, and Oculus are purposefully embedding their products in established markets.

As a result, the conversation that people are having about brands and VR as a whole are in the context of what they plan to do, making people as excited about the many different applications of the products as the products themselves.

In the topic cloud below, games/gaming and learning are among the most popular topics being talked about by those excited about VR, suggesting that application of products are vital to the VR conversation. 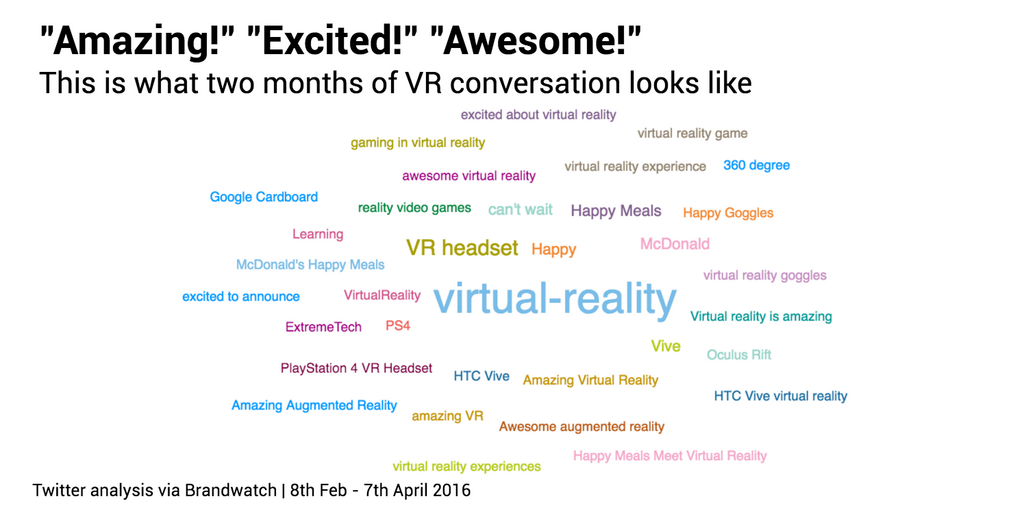 Another stark difference between Google Glass and current technology is the financial accessibility of the latter.

When Google Glass were first announced, they cost thousands of dollars, limiting who could and wanted to invest in them, alienating large portion of potential creators and developers who could have helped it succeed.

In contrast, this year introduced a range of products varying in price from Google Cardboard, only $15, to the HTC Vive, currently at $800.

The first few months of this year have shown that the accessibility of price and innate utility of the products has refueled eagerness in the tech market, as shown by the conversation on Twitter.

VR is the next big thing and i’m going to make millions with my virtual reality cat petting simulator pic.twitter.com/YrGik5xOf9

With VR tech being used in increasingly innovative ways we’ll certainly be keeping an eye on it this year.