The Brandwatch React team has been busy tracking mentions of MWC 2017 across social media. Want to know the highlights? We've got you covered.

MWC 2017: A place where incredible new tech wowed us and ghosts of cell phones past came back to life.

The Brandwatch React team tracked MWC terms throughout the week, finding out what was most notable on social.

Here’s what jumped out in the data:

Mentions of Mobile World Congress peaked earlier in the week, as this hour-by-hour breakdown shows. 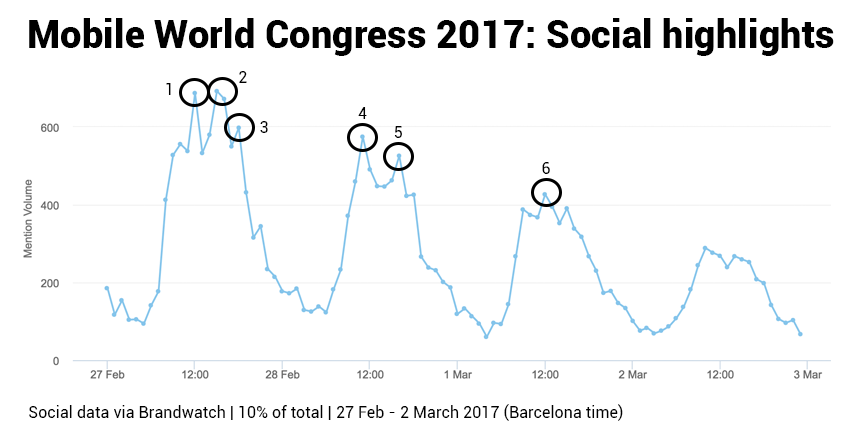 What caused the spikes? We took a look at the top mentioned terms within the mention spikes. While some revealed live moments, others simply reflected jumps in commentary surrounding general themes and products.

1 (Monday, 12 pm): A New York Times Monday briefing is shared widely on social, mentioning MWC 2017. Meanwhile, pictures begin to circulate of attendees getting hands on with the Nokia 3310.

3 (Monday, 6 pm): #5G begins to trend in the conversation – it’s a tech topic that will stick around all week.

4 (Tuesday, 11 am): IBM makes a big impression on the social conversation thanks to numerous different aspects of their presence at the show. Mobile payment and mobile money are also prominent topics, with Rambus’s mobile payments booth generating a lot of retweets via @MikeFeibus.

6 (Wednesday 12 pm): Huawei gets a jump in mentions from @craigbrownphd for their speech mentioning safe cities. IoT and 5G continue to generate a lot of conversation.

You’ll struggle to find a cooler place to find the latest gadgets than Mobile World Congress (although we did cover the Consumer Electronics Show 2017 if you’d like to take a look at that).

Going through trending words and phrases, we identified a number of buzzwords and abbreviations that came up again and again.

Internet of Things is almost guaranteed to be a top mentioned term, but 5G feels like the real star. As the subject on many influential lips, plenty of people shared stories around Intel’s 5G modem and the incredible possibilities the tech holds.

You might not be surprised that Nokia stole the show on social, although pairing that with the popularity of 5G shows the odd mix of old and new tech in the highlights of this MWC.

A large part of Nokia’s mentions, of course, involved the Nokia 3310 which was revived this year. #Cloud was also huge in the conversation.

Watch the highlights on how we innovate the global nervous system at #MWC17 with #IoT, #5G, #UBB and #Cloud https://t.co/DVn49eurjp

We identified the top-mentioned brands by checking the top 30 Twitter accounts and top mentioned words and phrases during each hour and day of MWC within our 10% sample. Volumes have been multiplied by 10 to reflect more accurate brand mention numbers. (Brands that didn’t have a significant “moment” on social but still generated a steady stream of conversation may not be included).

There’s no doubt that the Nokia 3310 was a big story, with Nokia involved in around 8% of the overall conversation, but 5G and Internet of Things appeared to be the most popular trends volume-wise.

With so much to be excited about, we picked out some of our favorite tweets from the conversation.

Orange CEO: 5G is a game changer. Will become as valuable to us as oxygen…#mwc17 pic.twitter.com/RNuiblANKD

Are you a journalist looking to cover our data? We have plenty more. Email us at [email protected] for more information