1. Definitions 2. The Services 3. Use of the Services 4. Fees 5. Confidential Information 6. Intellectual property 7. Term and termination 8. Exclusions and limitations of liability 9. Indemnity 10. General 11. Archived terms and conditions

“Agreement” means these terms and conditions, the Service Level Agreement, and any Order.

“Applicable Law” means any legally binding obligation on a party, including statutes, rules, regulations, codes, court rulings, or any other binding requirement.

“Customer” means the party identified as a customer on an Order.

“Customer Data” means data that Customer uploads via Brandwatch’s API (or otherwise makes available to Brandwatch) for the purpose of Brandwatch processing that data on Customer’s behalf.

“Losses” means any losses, damages, liabilities, awards, and costs (including court costs and reasonable attorneys’ fees) related to a Claim.

“Order” means an ordering document specifying the products or services to be provided to Customer by Brandwatch or a third party.

“Services” means the services that Brandwatch provides to Customer as set out on the Order.

“Term” is defined in Section 7.

“Third Party Services” means the products or services that a third party is to provide to Customer as specified on an Order.

“User” means an individual that Customer (directly or indirectly) has authorised to use the Services and/or the Third Party Services.

2.2. Responsibility: During the Term, Brandwatch will: (a) provide the Services with reasonable skill and care; (b) not make a material adverse change to the functionality of the Services; (c) provide the Services in material accordance with any descriptions of the Services referred to on an Order; and (d) process any personal data within Customer Data (if any) in accordance with the Data Processing Addendum available at https://www.brandwatch.com/dpa. Other than as set out in this Agreement, all other warranties, conditions, and representations, whether express or implied, are excluded, subject to Applicable Law.

3. Use of the Services

3.1. Responsibility: Customer: (a) is responsible for its compliance with this Agreement and will procure that each User complies with the terms of this Agreement as if that User were Customer; (b) will comply with the Twitter Terms of Service, usually at https://twitter.com/tos, and the Youtube Terms of Service, usually at https://www.youtube.com/t/terms; and (c) has the right, title, permissions, and interest in the Customer Data to make it available to Brandwatch for processing.

3.2. User protection: Customer will not: (a) knowingly display, distribute, or otherwise make Brandwatch Data available to any person or entity that it reasonably believes may use Brandwatch Data in a manner that would have the potential to be inconsistent with that individual’s reasonable expectations of privacy; (b) conduct any research or analysis that isolates a small group of individuals or any single individual for unlawful or discriminatory purposes; (c) use Brandwatch Data to target, segment, or profile any individual based on health, negative financial status or condition, political affiliation or beliefs, racial or ethnic origin, religious or philosophical affiliation or beliefs, sex life or sexual orientation, trade union membership, data relating to any alleged or actual commission of a crime, or any other sensitive categories of personal information prohibited by Applicable Law; or (d) without Brandwatch’s prior written consent, but subject to Applicable Law, display, distribute, or otherwise make Brandwatch Data available to any member of the US intelligence community or any other government or public-sector entity.

3.4. Password protection: Each party is responsible for using reasonable efforts to ensure that any User IDs and passwords required for Users to use Services are kept safe and confidential. Subject to Applicable Law, each party will promptly notify the other party upon discovery if the security of a User ID or password may be or is compromised.

3.5. Removal of Brandwatch Data: A licensor or Applicable Law may require Brandwatch to remove personal data within any Brandwatch Data. In such cases, Brandwatch will notify Customer of the impacted Brandwatch Data that requires removal and Customer will promptly remove such data from its systems, whether during or after the Term.

4.1. Fees: Customer will pay the fees for the Services set out in an Order. The fees for the Services are exclusive of legally applicable taxes, levies, duties, or similar governmental assessments, including goods and services, value-added, withholding, and sales taxes. Customer will provide Brandwatch with the information it reasonably requires to send an invoice. All fees are invoiced annually in advance, unless stated otherwise on an Order.

6.2. Reports: Customer owns any Report; provided that the rights to any Brandwatch Data in a Report are granted to Customer under a worldwide, non-exclusive, non-transferable, royalty-free licence to use the Brandwatch Data and the Report in accordance with this Agreement.

6.4. Customer Data Licence: Customer grants to Brandwatch a non-exclusive, royalty-free licence to process Customer Data for the purposes of providing the Services.

7.1. Term: This Agreement begins when it is signed by the parties or agreed to via an Order, and it continues until all Orders have expired or been terminated in accordance with the terms of this Agreement.

7.2. Mutual termination: A party may terminate this Agreement at any time on written notice to the other party if: (a) the other party is in material breach and, if remediable, the breach is not remedied within 30 days of being notified in writing of the breach; or (b) the other party begins insolvency proceedings, becomes the subject of a petition in liquidation, or any other proceeding relating to insolvency, liquidation, bankruptcy, or assignment for the benefit of creditors (including similar proceedings under Applicable Law); or (c) the other party makes an arrangement with its creditors related to concerns about insolvency (including similar proceedings under Applicable Law). If this Agreement is governed by New South Wales law, Brandwatch’s right to terminate in (b) and (c) above is limited by the Corporations Act 2001.

8. Exclusions and limitations of liability

8.2. Losses a party is liable for: Subject to sections 8.1 and 8.3, a party is only liable for Losses that the other party suffers as a direct and reasonably foreseeable result of a party’s breach of its obligations under this Agreement. Other than as set out in section 8.1 and the previous sentence, neither party is liable to the other party for any other Losses of any kind. If this Agreement is governed by New South Wales law and the Competition and Consumer Act 2010 applies, then, if Brandwatch is entitled to do so, Brandwatch’s liability will be limited to at its option to: (a) the supply of the Services again; or (b) the payment of the cost of having the Services supplied again.

8.3. Liability cap: Subject to sections 8.1, 8.2, and 10.10, each party’s total liability, however arising, is capped at: (a) the amounts set out below for Claims in a Contract Year; and (b) 110% of the fees for the Services incurred in the first Contract Year, for Claims outside of a Contract Year.

9.1 Brandwatch’s indemnity: Brandwatch will indemnify Customer’s Indemnitees against Losses arising out of a third party Claim against Customer that Customer’s use of the Services infringes the intellectual property rights of a third party. The indemnity does not apply if the Claim is based on Customer’s use of the Services in violation of its obligations under this Agreement. Where there is an indemnified Claim, Brandwatch: (i) may secure the right for Customer to continue using the Services or (ii) replace or modify the Services so that they become non-infringing. If (i) and (ii) are not reasonably available, Brandwatch may terminate the infringing Services on 30 days’ written notice to Customer and provide a pro rata refund of any prepaid fees for the terminated Services that were not provided.

9.2 Customer’s indemnity: Customer will indemnify Brandwatch’s Indemnitees against Losses arising out of a third-party Claim against Brandwatch that Customer breached section 3.1(c) or that the Customer Data infringes the intellectual property rights of a third party.

10.2 Rules of interpretation: The words “include” and “including” are deemed to have the words “without limitation” following them; and references to “will” are to be construed as having the same meaning as “shall”.

10.4. Publicity: Neither party will publicly disclose the relationship between the parties or the Services provided under this Agreement without the other party’s prior written consent.

10.5. Invalidity: If any term of this Agreement is found invalid, illegal or unenforceable, the rest of the Agreement remains in effect.

10.6. No waiver: Either party’s delay or failure to enforce a term of the Agreement is not a waiver of that right and does not prevent that party from later enforcing that term or any other term.

10.7. Notice: Each party will deliver notices for legal service or material breach by a courier service or recorded delivery: for Brandwatch, to its registered office address as set out above; for Customer, to its address as set out in an Order. Any notices for any matter other than legal service or material breach may be delivered in accordance with the previous sentence or by email. If sent by email, Customer will send the notice to [email protected] with Customer’s account manager in cc, and Brandwatch will send the notice to Customer to via an email address listed in any Order. Notice sent by recorded delivery is received three business days after posting; email notice is deemed received 24 hours after it is sent.

10.9. Anti-bribery: The parties will: (a) comply with all Applicable Law relating to anti-bribery or anti-corruption; (b) not engage in any act which, if it had occurred in the United Kingdom, the United States, the European Union, Singapore, or Australia would have violated Applicable Law relating to anti-bribery or anti-corruption; and (c) promptly report to the other party if it receives a request for undue advantage.

10.12. Third party rights: Other than as set out in sections 9.1 and 9.2, this Agreement does not create or confer any rights in favour of any person, other than the parties to this Agreement, even if that person has relied on the term or has indicated to any party its assent to the term. 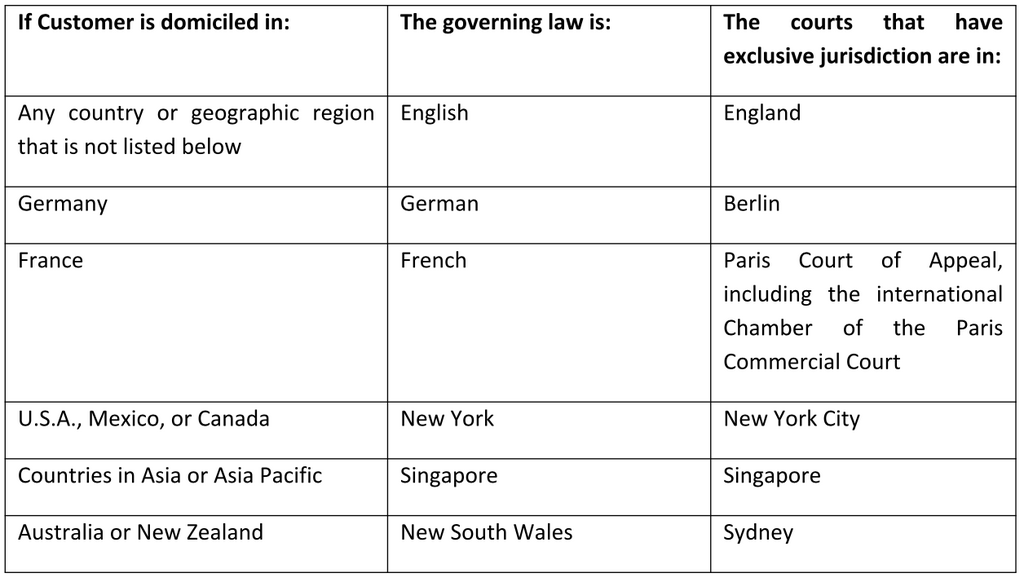