React: How the Apple Event Went Down on Social

The Brandwatch React team analyzed the social data behind September's Apple Event with live reaction to the biggest announcements.

This September’s #AppleEvent had all the social media drama we wanted to see.

The announcement of the iPhone 7, a swim-proof Apple Watch, a cameo from James Corden and a performance from Sia were among the highlights for us, but what did the internet think?

Looking at mentions of the event across 80million+ websites, we tracked 480k mentions of #AppleEvent (and related terms) over the two hours.

A huge build up

The build up to this September’s Apple Event has been a little confused. While everyone expected the iPhone 7 to be announced, the extent to which it would wow consumers has been up for debate.

Nonetheless, looking at the hype surrounding the event during Wednesday alone we were finding thousands of mentions an hour speculating about what could unfold. 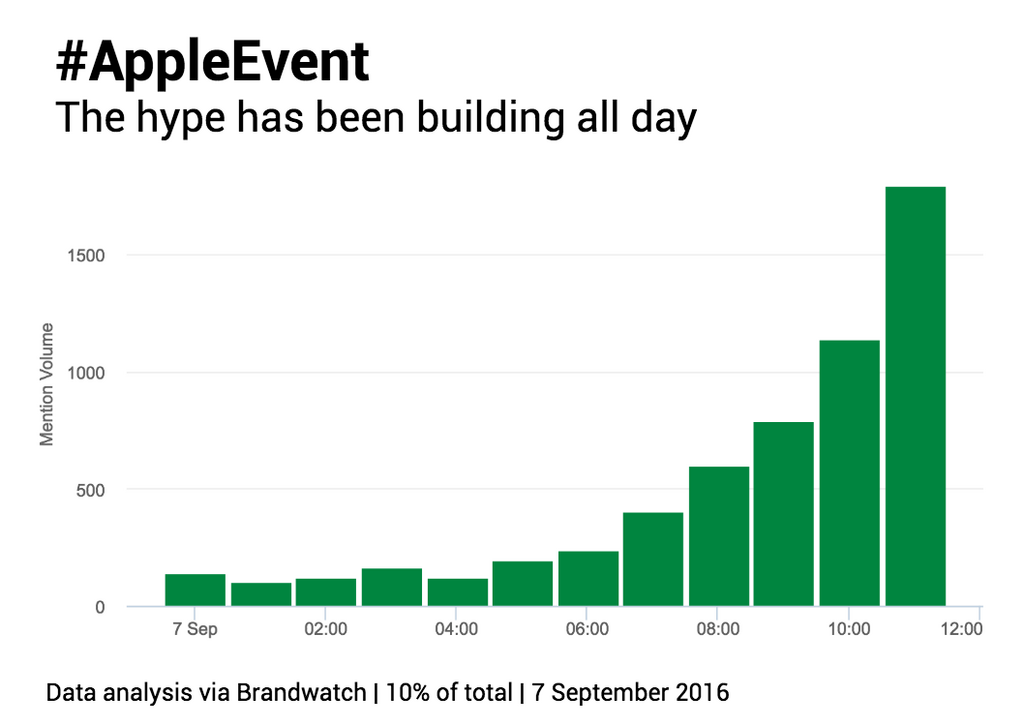 The main event was always going to be the iPhone 7, but Apple threw in some exciting surprises that really set social alight. 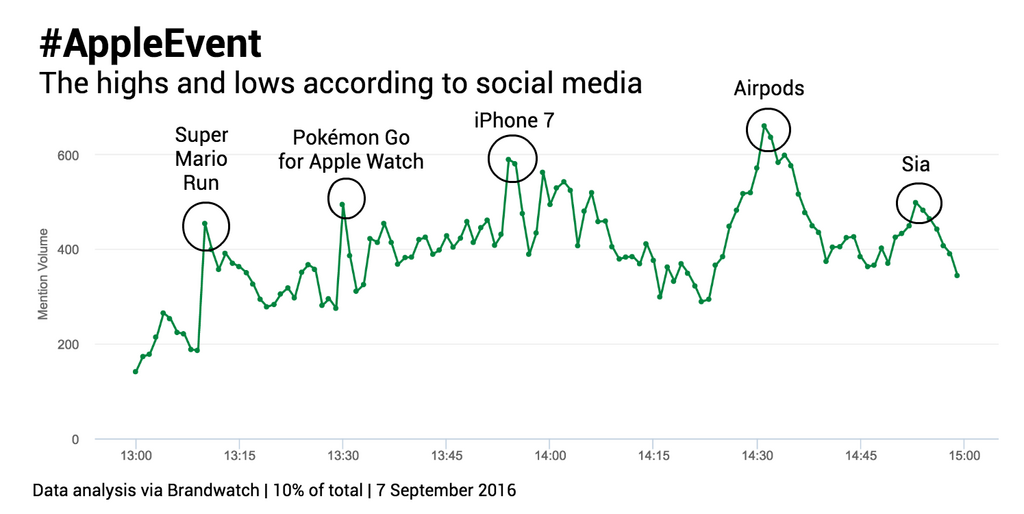 Starting at the beginning, Super Mario Run was announced early as a new game coming to iOS by none other than Shigeru Miyamoto. It made up the first significant spike in conversation.

Holy crap. Nintendo’s Mario will be on the App store. I am SO EXCITED!!!! #APPLEEVENT

In further game news which got social excited, Pokémon Go for Apple Watch was announced. While it got a huge initial spike it was unable to maintain Super Maro’s ongoing levels of discussion and it didn’t garner as many mentions overall. 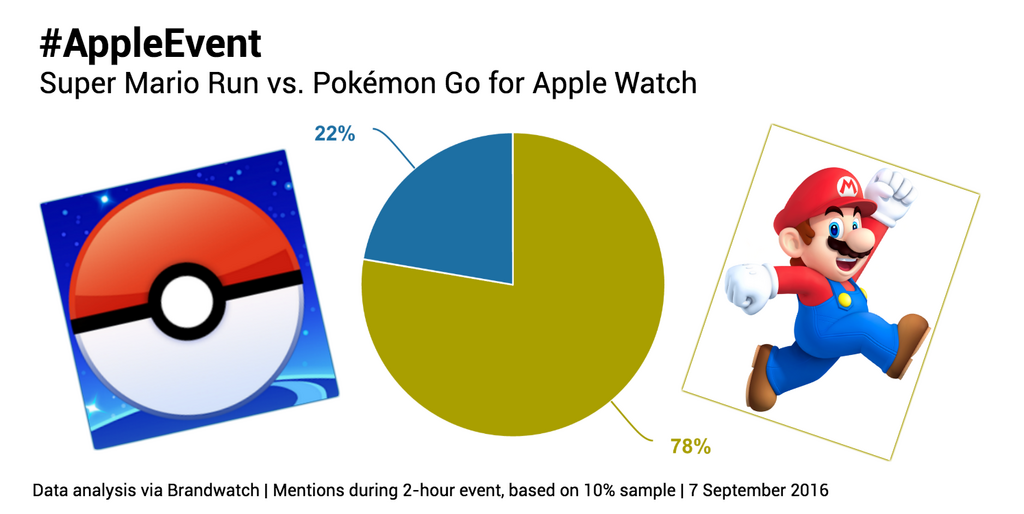 The iPhone 7 conversation caused the most mention spikes and the lengthy description of its features saw reactions of all sorts.

A significant amount of time was dedicated to the phone’s camera.

It’s something we found a lot of people talking about when rumors spread across the internet about what the iPhone 7 might bring for consumers. This graph shows some of the spikes in conversation surrounding rumored features as #AppleEvent approached. 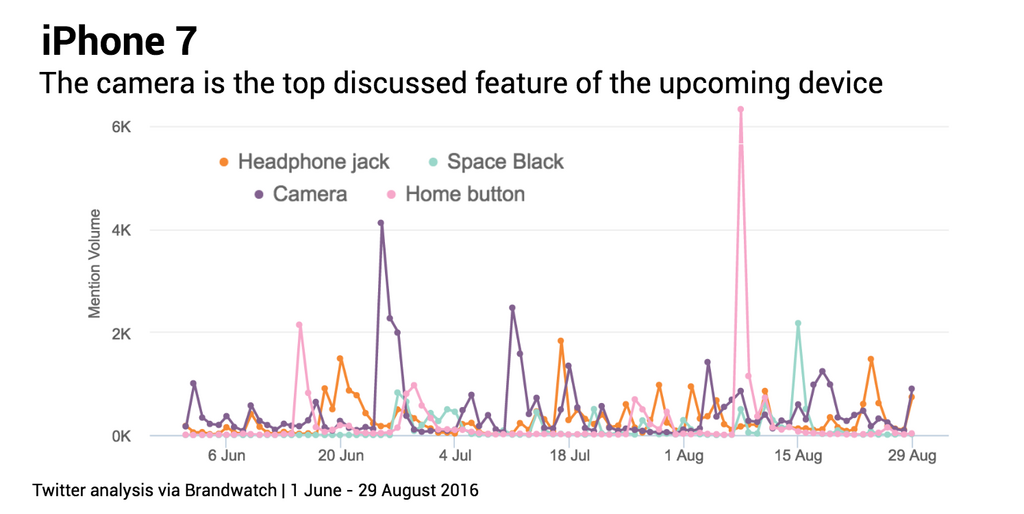 The lack of headphone jack which had caused a lot of controversy in the lead up to #AppleEvent was a key point in the conversation as it was officially announced. Wireless AirPods were introduced and mentions absolutely exploded, though not everyone was impressed.

Overall, the AirPods were up there in the conversation with mentions of “iPhone” and “AppleWatch”. 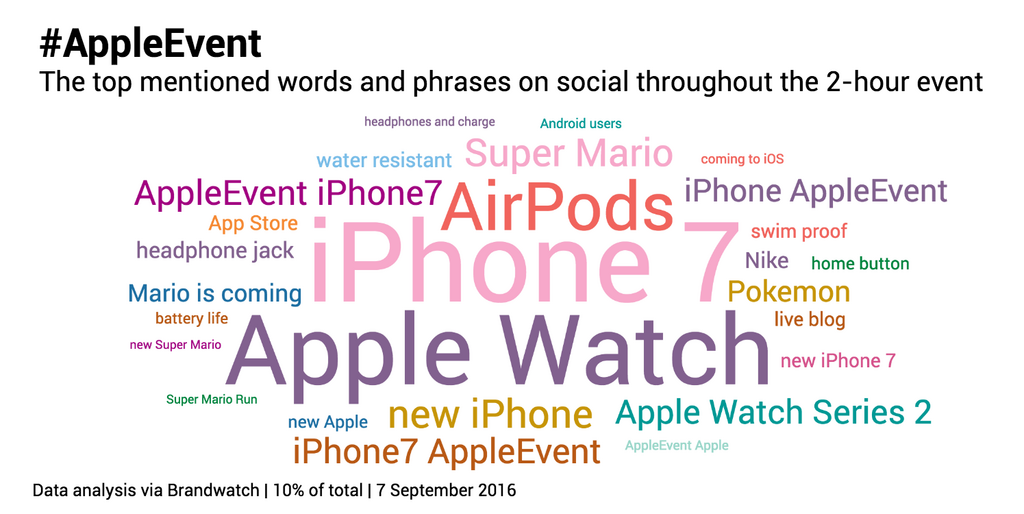 What can we take away?

Celebrities got far less mentions than products which Apple will probably be pleased about, and the iPhone 7 was (as was expected) the top mentioned announcement. 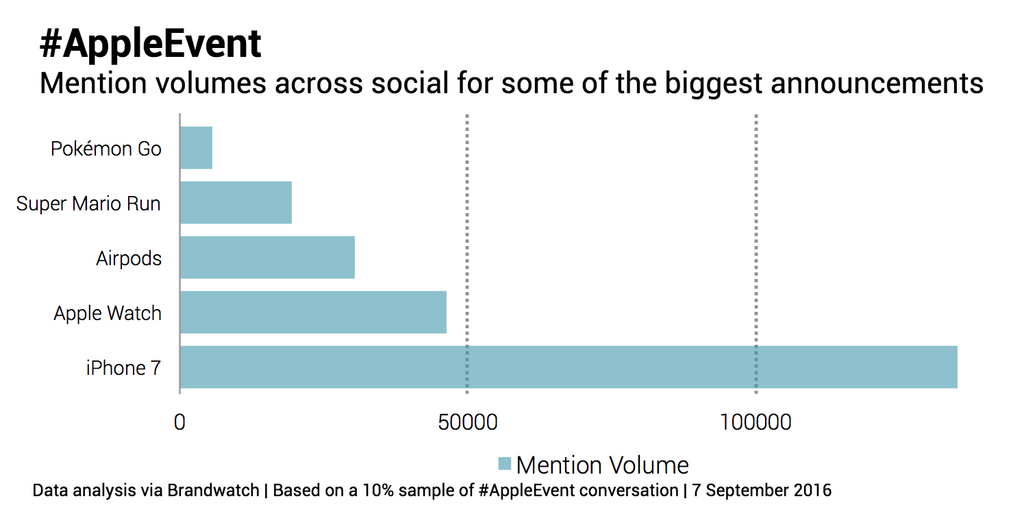 It remains to be seen how the iPhone 7 will do in store, but initial reaction seemed positive when we looked at sentiment-categorized mentions. The AppleWatch was also received favorably though the AirPods had noticeably less positive mentions percentage-wise. Whether consumers can forgive Apple for removing the headphone jack could be a major factor in buying decisions. 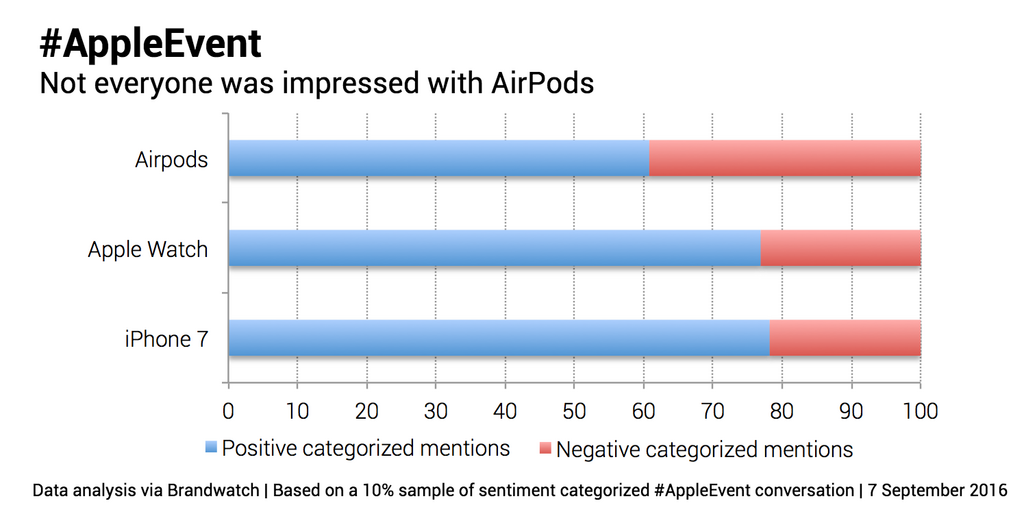 The chart above shows  the percentage of mentions categorized as most-likely positive or most-likely negative based on the contents of the post surrounding an announcement mention.

What did you think of Apple Event?