React: Is the World Actually Ready for a GoPro Quadcopter?

Autonomous flying cameras graduated from the fictional worlds and sci fi novels some time ago.

Drones with cameras strapped to them were one of the biggest sellers of the last year.

With millions of these devices in the hands of responsible and irresponsible pilots, new drone scandal stories seem to pop up every week.

Drones have been used to spy on neighbors sunbathing, to grab unauthorized ariel shots of concerts and – most worryingly – been fitted with working pistols.

Governments, pressure groups, and even trade organizations have been working to build framework to make drone usage more responible.

But, some argue they’re failing to move fast enough – hence the constant fear and haranguing from techno-sceptics.

As fast as drone tech is moving, it’s about to start moving a lot faster.

GoPro has long been the camera of choice to strap on to quadcopters.

It’s small, light, durable and remarkably cheap for a camera of its quality.

Most of these GoPro-to-drone solutions are third party, which left many wondering why the camera giant themselves hadn’t acted on a match made in heaven.

Rumours around a GoPro-manufactured drone have been in the works for a while. Even back in 2014, many publications were revealing insiders knew drones were planned for 2016.

When GoPro CEO Nick Woodman announced the quadcopters at CES this year, he was met with a surprisingly muted reception.

Maybe the audience were distracted by Woodman’s showboating prescience and stage makeup, but perhaps there were more deep-seated anxieties at play.

Even though GoPro’s stock jumped after the announcement, the press raised skepticism, as did social media.

Our newest research finds that more people are concerned about the future of drones than excited by it.

Is the world ready for a GoPro on a drone? [Tweet this]

Since it was announced, the device has been mentioned 25,580 times.

We’ve also looked into a few of the reasons why mainstream drone adoption may be ill-fated.

There’s a surprising majority of drone-skeptics that already have a plan a of action should flying cameras encroach on their privacy a little too far.

Over the last two months, we’ve seen individual mentions 2,245 mentions of people wanting to shoot down a drone. 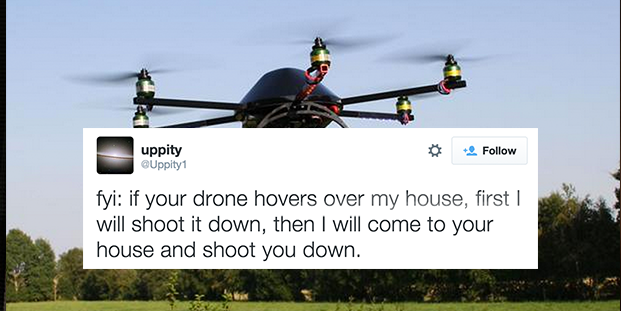 Particularly in the US, some people strongly believe in two things: right to privacy, and the right to bear arms.

Recently, a man in Kentucky was arrested for shooting down a $18,000 drone flying in back garden, saying “I felt that I was well within my rights as an American citizen to defend my property.”

Some people have dismissed American citizens like these as trigger-happy yobs looking for free target practice. However, we’ve picked up on a serious and recurring fear of the machines.

In the same time period, there have been 239 people who have expressed their fear over being watched, or spied on, by drones.

It echoes the findings in a survey published last year that a large number of people were scared and apprehensive about drone delivery. 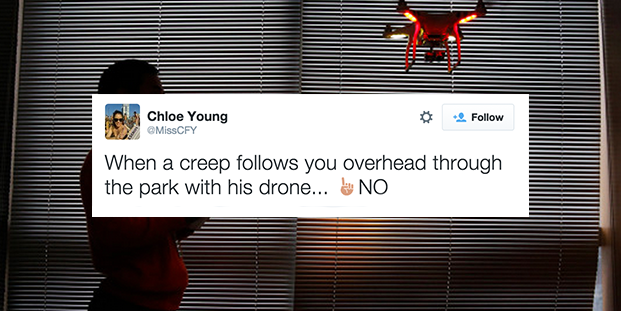 More than privacy, people are concerned something else being taken away from them by drones: their lives.

When footage of a pistol-firing drone hit the internet, people were suitably shocked. With drones getting cheaper, and guns available to 3D print at home, hiring a hitman just got a lot easier.

Over the past 2 months, 205 five people have specifically said they’re worried about getting shot, hurt, or injured by a drone. 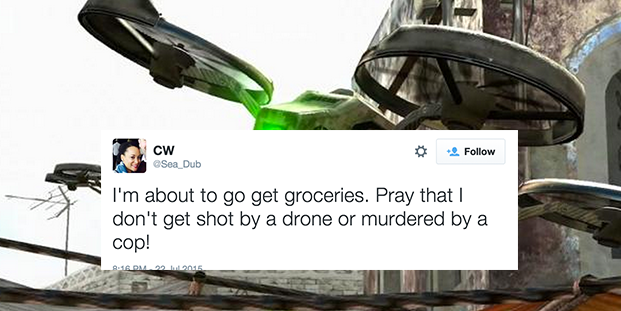 Despite all this, the biggest problem with drones isn’t the drones themselves. It’s the humans operating them.

Around the holiday season, it seemed like more people were complaining about broken or destroyed drones that celebrating using them.

In the past two months alone, 137 have reported they’d got their drone stuck in a tree.

Recent research shows that they may never be adopted by the mainstream at all.

While part of the progress lies with manufacturers like GoPro, it also lies with lawmakers.

The UK Civil Aviation Authority have published a ‘dronecode’ from drone owners, which states they must always fly within the operator’s line of sight.

Our office has a few drone-fanatics, so we’re sure to be the first to find out whether social media fears about GoPro’s drones are valid.