The Brandwatch React team use social media MWC 2018 data to identify the brands, products and tech trends that got the most attention in online conversations.

After a week of exciting announcements, MWC (Mobile World Congress – the world’s largest gathering for the mobile industry which takes place in Barcelona) is over.

The Brandwatch React team has, of course, been monitoring the conversation all week. We’ve been providing data to @TwitterMktgUK, naming the top brands, products and tech trends in the conversation and now it’s time for a full round-up of the week.

The biggest brands in the MWC conversation

There are potentially thousands of brands who could be discussed in relation to Mobile World Congress. In order to find the top brands in our data we surfaced the ones that trended in our topic cloud throughout the week (topic clouds identify top used terms and phrases) as well as in popular news articles and then searched within the overall conversation to find out exactly how many mentions those trending brands got. We used this same methodology for both the top mentioned products and the top mentioned tech trends later in this article.

Here are the top five most mentioned brands: 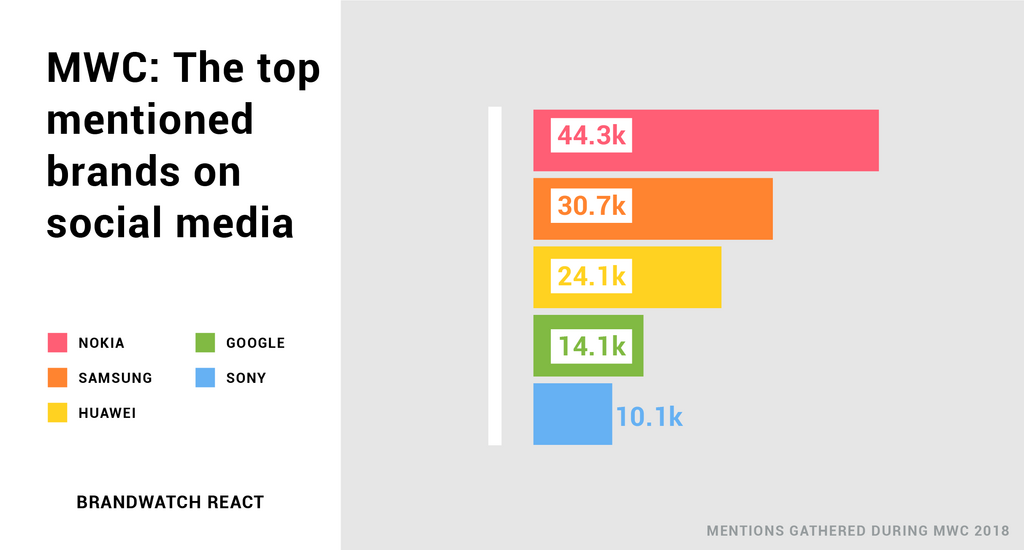 Nokia fought off the likes of Samsung, Huawei and Google to become the top mentioned brand in the MWC 2018 conversation. While we used a slightly different methodology last year, the brand also triumphed in 2017.

The biggest products in the MWC conversation

Again, we identified the top products by looking for those trending in the topic cloud throughout MWC and within popular news articles, then searching within the overall conversation for each of them.

Here are the top five: 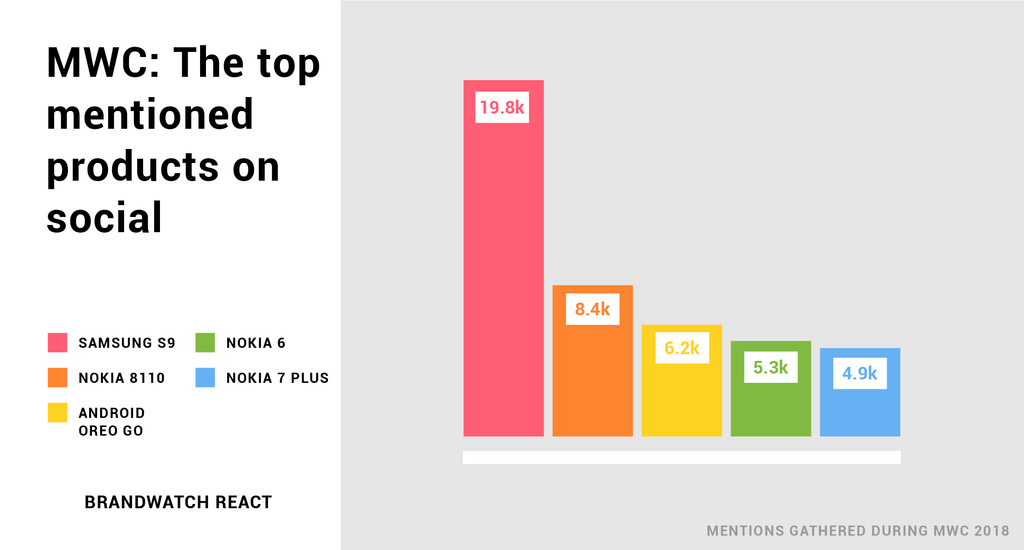 Despite Nokia’s success being the top mentioned brand overall, it was the Samsung S9 that generated the most product-related conversation at MWC 2018. That said, three of the top five were Nokia products.

The tech trends in the MWC conversation

Like before, we checked our topics clouds and popular news articles for top trends throughout the week and then searched within the entire MWC conversation for each of them to identify the top five. 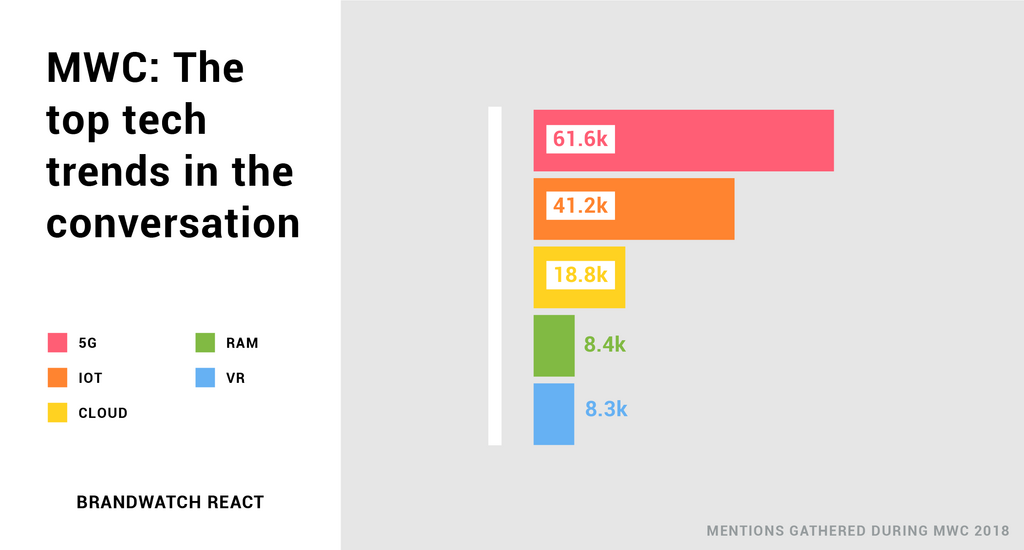 “References to 5G are everywhere at MWC 2018,” says Matthew Reynolds in Wired. The technology has successfully created a huge amount of buzz, although Reynolds says we won’t see it explode into common use just yet.

Influential tweets and voices in the MWC conversation

We wanted to find some of the most influential mentions of MWC on Twitter, so took to our “Twitter insights” component in Brandwatch analytics to see which links and names were getting the most engagement. Here are a couple of the top 10 tweets:

Here are the craziest things we saw at Mobile World Congress 2018 #MWC18 pic.twitter.com/aCFED8GH7R

A look into the future? Graphene researchers claim foldable phones will soon be a reality. More #MWC18 and tech news: https://t.co/2h4r9ZGefz pic.twitter.com/qna8Mi7EIi

Using Brandwatch it’s also possible to zoom in on influencers for certain brands within larger event conversation. We picked Ericsson as an example, tagging up mentions of their brand and then identifying the tweeters discussing the brand that are getting the most retweets.

We immediately found significant conversation coming from Ericsson’s owned channels as well as other influential voices in their conversation. @BEVEVE, @evankirstel and Brandwatch guest blogger @ronaldvanloon were among them, sharing engaging video content.

What was your favorite thing at MWC this year?

Are you a journalist looking to cover our data? Email [email protected]atch.com for more information