React: We Know What You Asked Santa For This Christmas

Brandwatch analyzes nearly 200,000 tweets mentioning "All I want for Christmas", finding out which brands are most desired this Christmas.

As Christmas edges closer, social is abuzz with festive cheer.

Messages of peace, joy and togetherness are being shared the world over as the scent of Christmas baking fills the air and carol singers sing merrily in the streets.

But, messages of good will aside, festive tweeters in their thousands have also posted frank and hopeful tweets detailing exactly what they want under their trees this year.

We analyzed nearly 200,000 tweets featuring the classic line “All I want for Christmas is” to find out what’s most in demand this festive season.

If you think someone’s hard to buy for it’s probably worth checking their Twitter feed.

In December alone we found 195,432 tweets mentioning “All I want for Christmas is”, appended with a plethora of desired gifts from the weird and wonderful to big name products.

Breaking tweets down into present categories, the most mentioned item we found was ‘phone’ which was consistently popular throughout the month, particularly on 11th December when an iPhone giveaway prompted a large peak in phone related “All I want for Christmas” tweets. 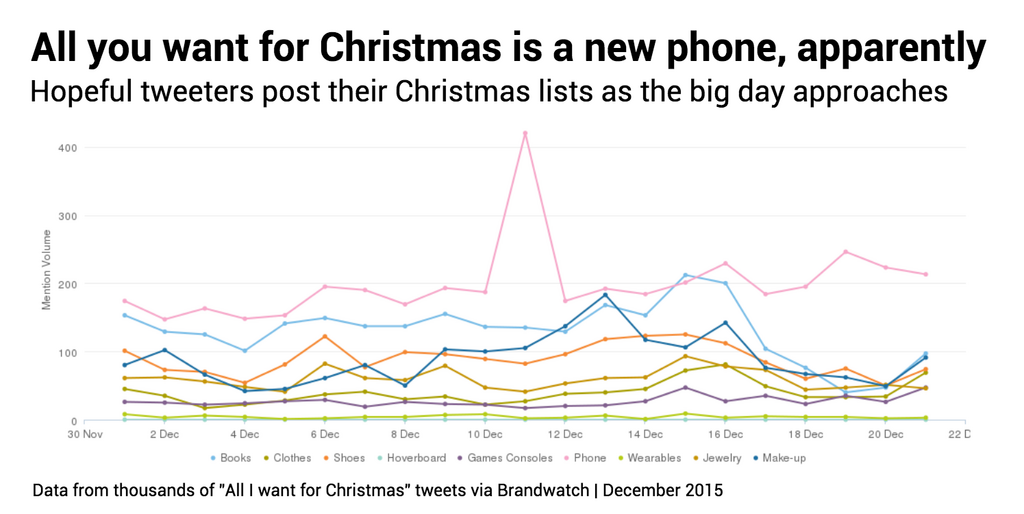 Books, make-up and shoes made up large segments of categorized present requests while jewelry, clothes and games consoles also made up significant portions. 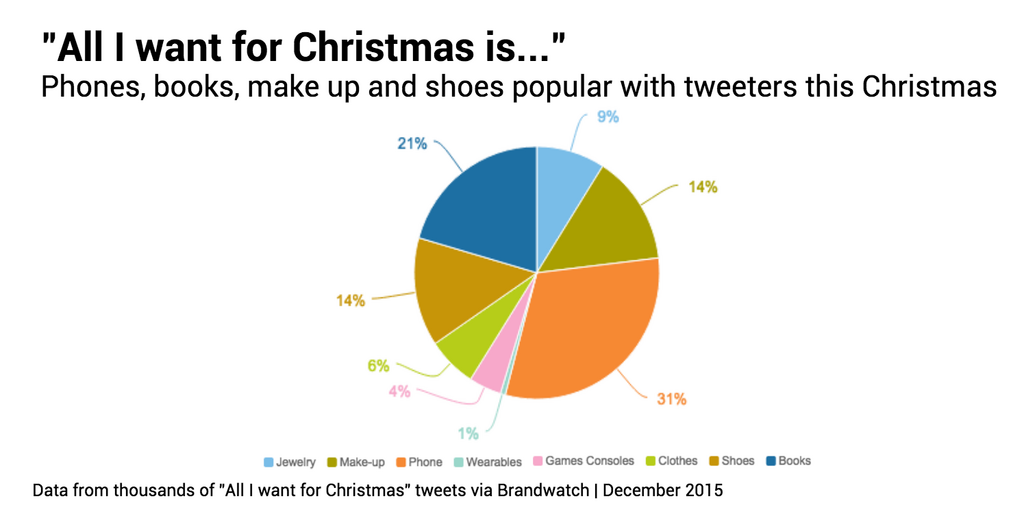 Deck the halls with Apple products

Tweeters weren’t shy about naming the brands they were most keen on this Christmas.

Predictably, Apple made up the largest chunk of tweets we analyzed mentioning top brands even when we removed mentions from the iPhone giveaway on 11th December. We also found that iPhone mentions accounted for over 75% of the overall Apple mentions in “All I want for Christmas” tweets.

Amid predictions that iPhone sales could drop in 2016, social’s festive excitement could translate into what will be a very welcome healthy Christmas for the company. 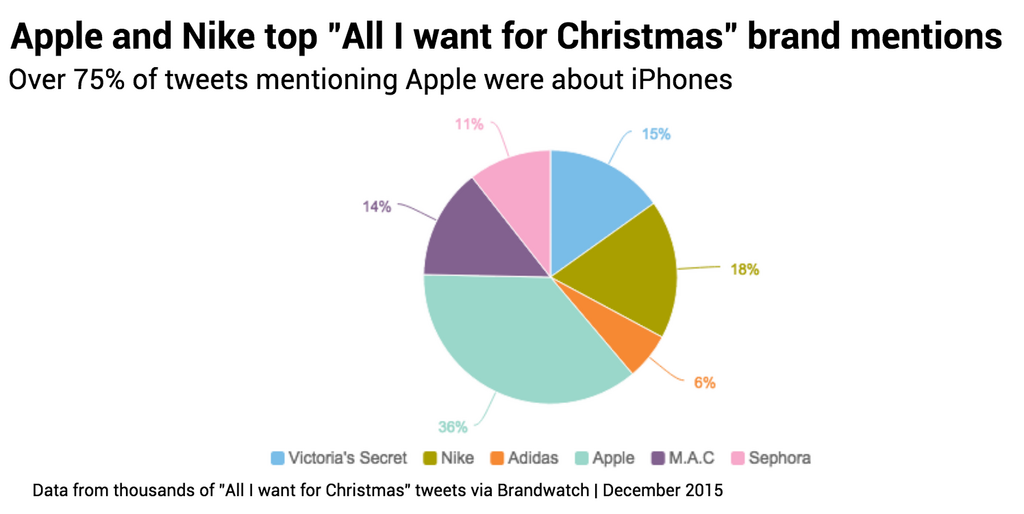 Victoria’s Secret mentions, which took up 15% of overall brand categorised tweets, peaked during a fashion show which inspired many to tweet about how all they wanted for Christmas was a career as a Victoria’s Secret Angel as well as to express their desire for gift cards and garments. 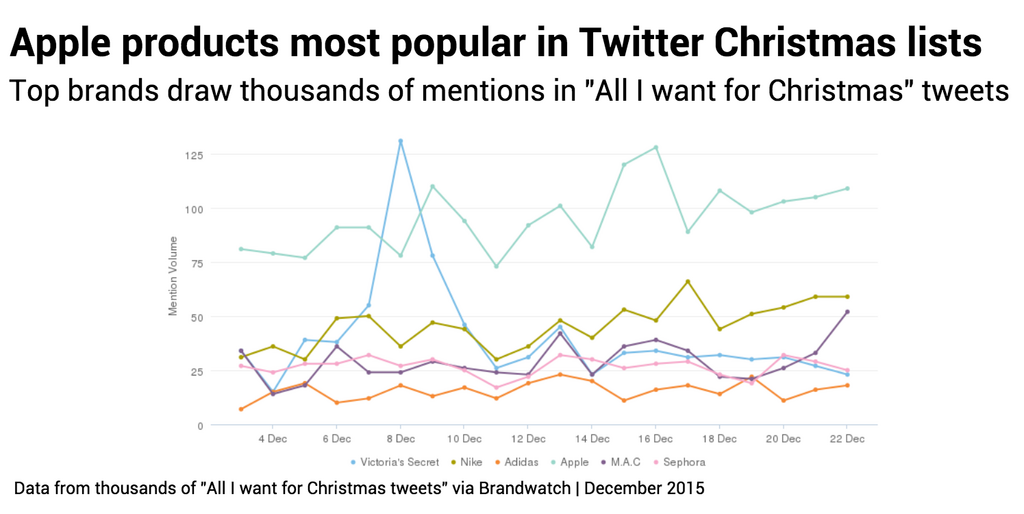 Do you hear what I hear? Santa’s social listening skills put to the test

While Twitter might have made Santa’s job a little easier this year, mentions of “Dear Santa” have rocketed as Christmas Day approaches. 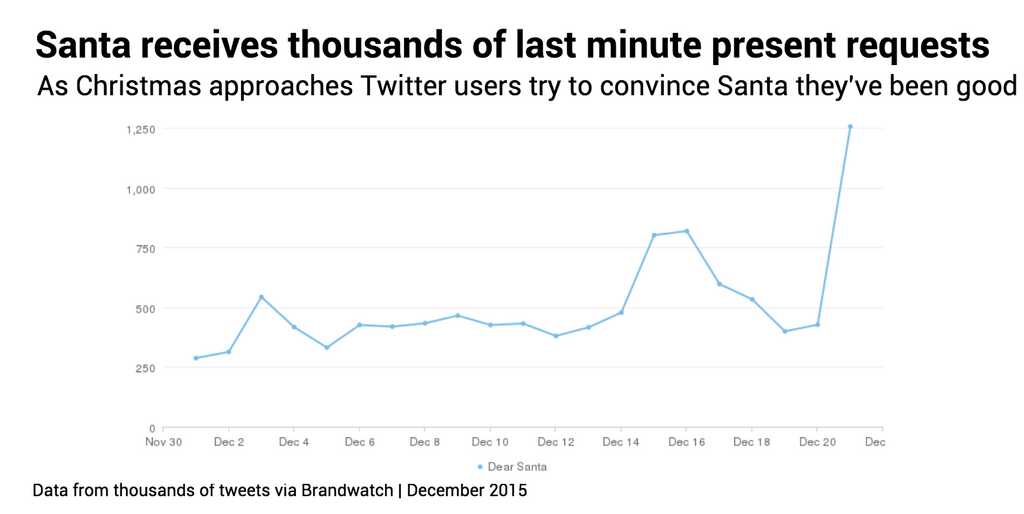 Whether or not last minute wishes will be granted is yet to be seen.