React: Why Thousands of People Love (and Hate) Windows 10

Find out how social media reacted to the launch of Windows 10. We analysed 1000s of conversations to reveal what people loved and hated about Windows 10.

To Microsoft, Windows 10 marks a “new era” for personal computing, and the company.

Fresh off the cloud servers, the newest version of Microsoft’s operating system aims to turn back much of the damage done by a confusing, radical Windows 8.

“Windows 10 is a huge milestone for us as a company, and quite frankly the industry,” said Satya Nadella, Microsoft’s CEO. This is his first Windows launch as Microsoft boss, there’s a lot riding on this going well.

Tying together the mobile-friendly features from Windows 8, cloud-based assistance to rival Google, and the wide appeal of the Xbox platform, the launch of Windows 10 appears, from a distance, to be a broad success.

“We want Windows to go from where users need it,” said Nadella, “to choose it … to loving it.”

Analyzing 7,000 authors online and on social media, we’ve constructed a focus group to determine how much people ‘love’ Windows 10.

In short; they love it a lot.

Haters to the left…

Unprompted, thousands of people post their opinions of Window 10 online every day.

Positivity surrounding the launch is overwhelming. 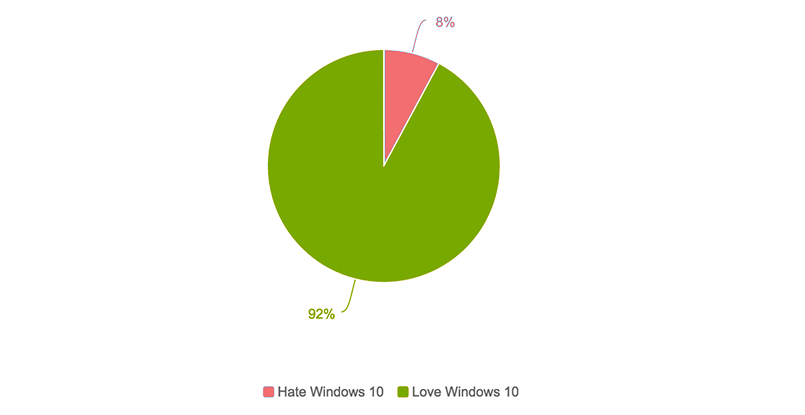 In total though, the outlook is slightly less positive.

A trend towards growing hostility can be observed. Peaking two days after launch, the level of hatred seems to be growing.

On average, roughly 100 people a day say they hate Windows 10, whereas 500 people say they love it.

Given there have been 1.2 million mentions of Windows 10 in the past week, a handful of haters are nothing to worry about – it’s less than 0.01% of the conversation.

Apple Pay, when it launched, had a much more troublesome experience.

A host of new features have been introduced with Windows 10.

Along a whole new type of desktop, there’s an AI assistant in Cortana, a total suite of Office Apps, the ability to stream games from your Xbox and a brand new internet browser, Edge.

Nadella has said that Cortana “completely changes what personal productivity software means from a day-to-day experience.”

It’s a digital assistant that helps you search for documents, keep track of your calendar and book travel appointments.

He could be on to something.

According to our research, Cortana is the most loved new feature of Windows 10.

While you can learn a lot from praise, you learn more from criticism.

Gabe Aul, Microsoft’s engineering general manager said “we just believe the customer feedback shaping the product is how we’re going to build clarity and confidence that we have a great product.”

Below, we’ve surfaced the features that are mentioned most when people say they ‘hate’ Windows 10.

Putting these two measures together, we can find a definitive list of the features which have been a success.

Competitors should be taking note, too.

When Cortana was announced, many dismissed it as a gimmick.

Carrying the same name as a character from the Halo series, people thought it was a quick-and-dirty effort to imitate Siri.

Social – the unfiltered voice of the people – shows that people love it, it’s one of the reasons people are keeping Windows 10.

The verdict? Microsoft needs to return to its redesigned Office Suite and redesign it again.

Cortana, though, can stay – even though news of her presence being slightly over-bearing is starting to take hold.