One of the biggest Apple events of the year was concluded last week after week-long festivities, leaving behind many memorable quotes, excitement and heated debate.

It was an interesting week for geeks everywhere and the Twittersphere was alight with discussion around the numerous updates from WWDC.

With so many eyes on Apple to see whether it can revive its doubtful and dwindling fan base, we felt it was only appropriate that we dig in for social insights through Brandwatch app.

Using Brandwatch’s flexible query and Rule functionalities we were able to set up a custom-tailored search that looks for relevant mentions of WWDC in the United States. 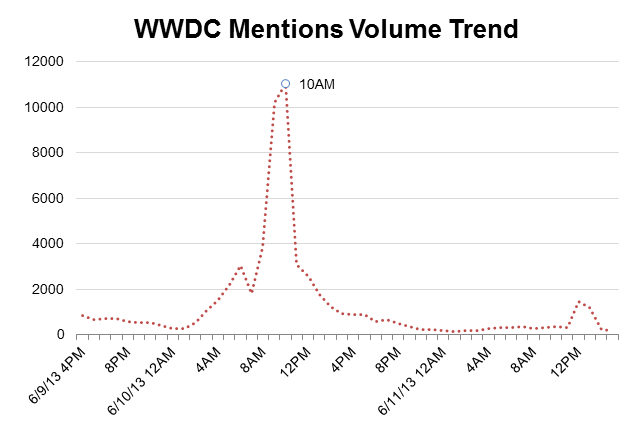 The buzz around WWDC started to spike significantly about an hour before the start of the event and reached its peak at 10AM PDST when Apple’s CEO Tim Cook took the stage.

On the day of the keynote speech, there were total of 73905 WWDC mentions in U.S.

Taking place in San Francisco, WWDC unsurprisingly received the most buzz (25%) from those in California, which was followed by New York with 13%. 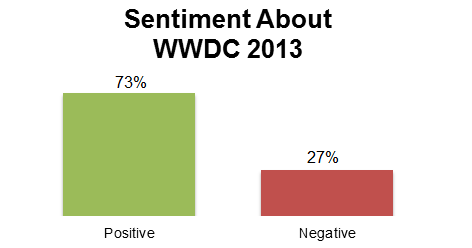 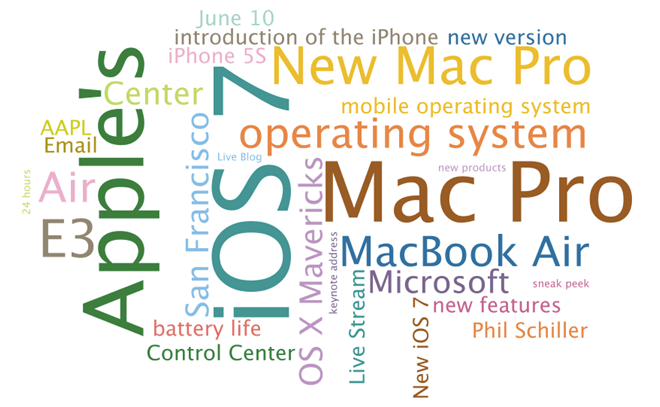 As depicted in the above topics cloud, battery life was a popular overarching theme for Apple’s presentation across different product lines.

However, what really garnered a lot of attention on Twitter was the Mac Pro.

Phil Schiller, SVP of marketing for Apple, took stage to boast something slightly unexpected: the famed aluminum Mac Pro chassis, which has not gone through a major cosmetic change since 2006, has been revamped with more computing and graphics power than any previous versions and packaged into 1/8th the size of previous models. 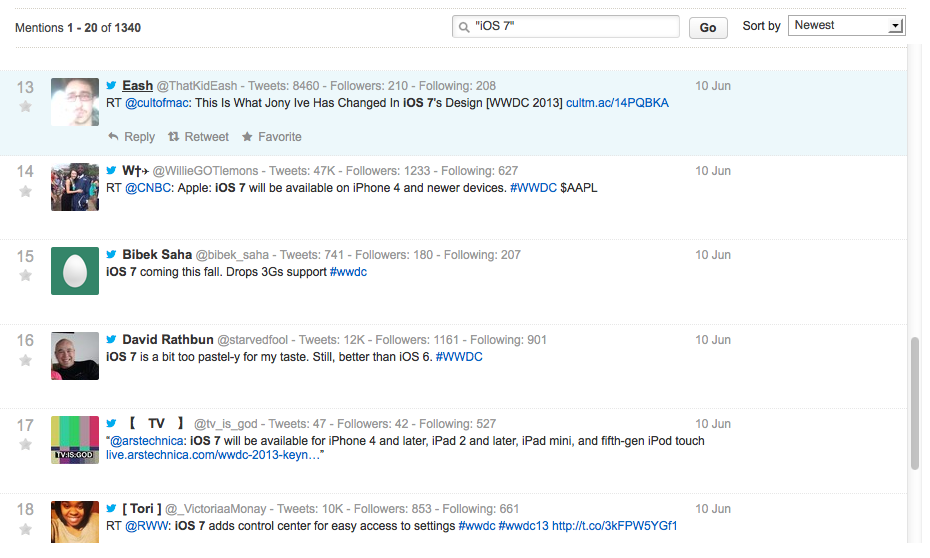 Following the sneak peak of Mac Pro was the announcement about iOS 7, which had already been anticipated by many to be unveiled at this event.

The refreshed mobile operating system boasted several new features, as well as a complete overhaul in user interface. Further news of a renewed MacBook Air also featured among the most hotly-discussed topics.

Based on popular topics above, we categorized newly announced products and were able to calculate their share of voice.

iOS 7 was in the lead with Mac Pro announcement coming in close second. 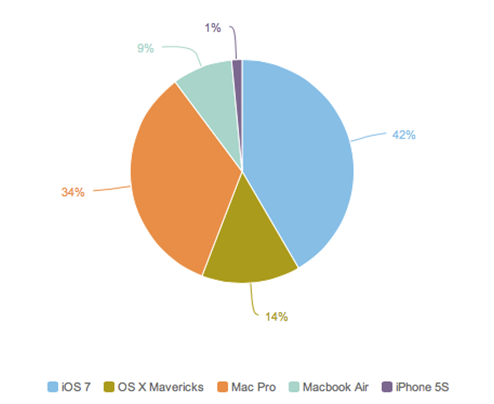 Steve Jobs was one of the most idiosyncratic personas in the tech industry, and following his death in 2011 all the operations that Steve Jobs notoriously micromanaged were divided among Apple’s current leadership team.

Category function can be used to track visibilities of executives to specific audiences, such as in this case with Twitter. Accordingly, we thought it would be interesting to see which exec is getting talked about most.

Tim Cook, current CEO of Apple had a very obvious lead with 46% of exec chat, followed by Jon Ives, SVP of Designs, who had a huge influence in the UI changes that were announced during WWDC.

Phil Schiller’s presentation on the redesigned Mac Pro and a memorable quote (“can’t innovate any more? my ass”) had a huge traction on Twitter as well. It is also interesting to note how Steve Jobs still provides a source of chatter for many of those following WWDC. 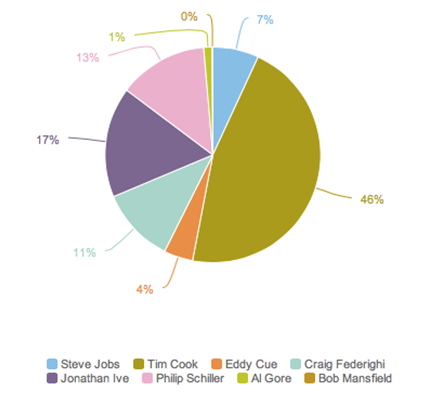 Brandwatch’s Twitter Insights functionality is a powerful tool that can allow users to take a step further from textual searches to more content-based searches. It can show you particular pieces of content that are resonating amongst Twitter audiences.
For example, here we see that the Verge’s report on Mac Pro is the most tweeted content regarding WWDC.

The Insights component is also a great tool to monitor trending hashtags and popular conversations on Twitter. It is interesting to see hashtags relating to E3 and Xbox were trending alongside WWDC on this day. 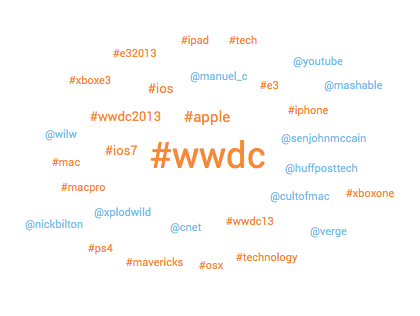 With most of the announced developments for iOS and Mac still in beta and not due until Fall, it will be interesting to see how Apple’s saga unfolds and whether these new products will deliver on high expectations people have for Apple.

To get closer to the data and uncover how Brandwatch reveals these types of insights, get in touch with us for a demo today.