The Twitter social marketing bloc has seen plenty of trends and experiments in the past twelve months, as plenty of marketing teams have joined in the heated debate about the pros and cons of which type of hashtag promotion to use on Twitter.

No option is better known than the infamous “Branded Hashtag” which comes with high risk, but also high reward if promoted “correctly.”

This beast can put fear into even the most seasoned marketing and PR teams. Who could forget the famous #McDStories promotion, for example?

This was when the golden arches marketing team planned and hoped for shared stories of reminiscent road trips, as chronicled by their beloved McDonalds. Unfortunately, the twitterverse was not “lovin’ it.” 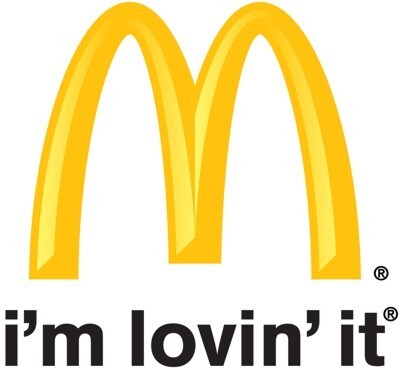 It’s fairly safe to assume that a great hashtag campaign has the potential to drive brand awareness, increase online conversations, drive traffic to your website and has an obvious call to action or goal.

All good things for any business of course; alas, even with these boxes checked, it can certainly be hard to predict the outcome.

The reality seems to be that stories like #McDStories have driven some marketers away from the bold efforts of using their company name for promotion hashtags, striking fear into those scared of having the unpredictable social web take control of their trend and do malicious things with it.

So is the risk worth the potential reward? Let’s consider some of the different types of hash-tags recently being used in sponsored trends highlighting the perceived pros and cons.

Sci-Fi channel rolled out #IfIWereAnAlpha. If you didn’t know “Alphas” is the name of a Sci-Fi channel show, so what could go so wrong with that?

Alpha is a generic term that could mean many things, but tragically for Sci-Fi, “Alpha” is also a term popular with the (arguably competitive) show “Teen Wolf” on MTVessentially resulting in Sci-Fi inadvertently paying to promote MTV’s Teen Wolf…enough said?

Lesson: Use a social media-monitoring tool on all keywords in your hashtags to learn how people interact and interpret your choice words, thus ensuring you hit your target audience.

A recent successful example is the #DreamDogPark hashtag sponsored by Beneful pet foods. 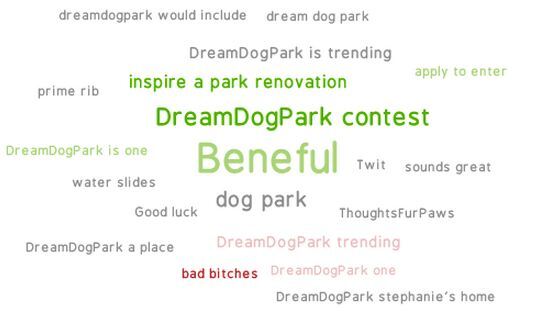 Looking at the above image it’s obvious that Beneful’s promotion included a call to action giving users a guided conversational focus. We can also see the general sentiment is positive.

The conversation drew a small percentage of negativity that luckily didn’t catch on (see “bad bitches”). Interestingly, the brand name is the most significant resulting topic, even though it wasn’t in the hashtag itself.

Lesson: Use an obvious hash tag that will help guide and control the conversation attracting your target audience.  Have a plan in place to drive traffic to secondary site with a call to action within the tweet.

Unfortunately, there are also situations where you may perceive that all of your research, testing, and internal approvals to launch a branded trend promotion indicate a gold mine of hashtag success – only to then discover that users have begun to take the hashtag off topic! 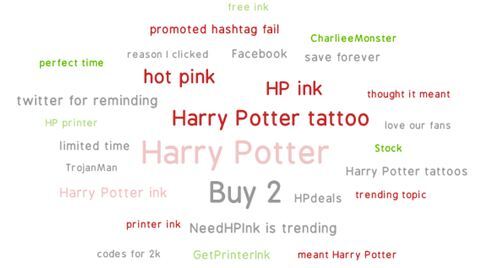 HP was likely using a social media monitoring tool that allowed them to notice the Harry Potter topic mentions.

However, without a tool to surmise trends across hundreds of tweets, it can be very difficult to spot issues early.

The good news in this situation is instead of letting the trend play out all day you can request that Twitter changes the trend during the day. Which is what HP did…

Lesson: Sift through all the different definitions for keywords (In this example we’re sure the SEO guy would have picked this issue up: “ink” also means “tattoo” and “HP” can be short for “Harry Potter” on social media)

Changing the above trend sounded like a good idea for HP, but the company made the change to #GetPrinterInk. Now, kudos to HP and Twitter for getting in front of the Harry Potter mix up, but Twitter is an organic beast.

Using an uncreative advert stands out as such. In the below topic cloud people are asking a simple question: “why the hell is this trending?”

Lesson: Always have a solid backup hashtag, just in case.

Experimenting and tweaking is the key!

Recently, Twitter added a new feature to the trending topics package in order to help keep the right conversation focused around the promoted trends.

The feature lets companies use an unbranded custom hashtag, but also attach their brand name to the trend.

Keeping the brand name out of the #findgreatness hashtag allows Nike to keep the conversation as organic as possible. Now will this latest innovation help brand leverage the power of Twitter? You be the judge.

So now tell us … what are some of the most intriguing, interesting, bizarre hashtag promoted trend experiences you’ve had or seen?