By listening to specific mentions that express an intent to purchase, brands can uncover the effectiveness of their campaigns and prove their ROI.

Share-of-voice, buzz volumes and other common outcomes of a listening program are starting to look a bit dated, as enterprise-level social media monitoring platforms offer the possibility to go into more depth and get highly sophisticated, specific data.

Diversified businesses, such as Sony – one of the leading manufacturers of electronic products – primarily focuses on the technology, gaming and entertainment sectors, so keeping an eye on buzz around not only their brand, but within each of these areas is essential. 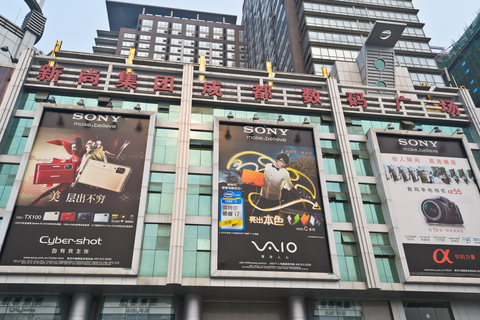 Rather than looking exclusively at volumes of conversation, diving into the specific topics and themes within it can be hugely insightful.

Think how filtering for feedback on products from customers can help aid the development of services, or how isolating complaints can power your customer service engine.

Topics analysis and categorization can help identify those key elements and reactions that make campaigns especially successful (both before, during and after the campaign), and from an audience perspective rather than just a brand’s one. This can help build a highly efficient, well-targeted marketing strategy.

So, how do you go for this custom, more advanced analysis, when necessary?

Well, in Brandwatch It’s all about creating Rules, which allow you to automate the manipulation of your data set (the query). This usually manifests as a refined search for a specific type of data (such as the examples listed above), which can then be marked up into categories and tags automatically, and continuously.

Large numbers of people talking about your brand is certainly a good indicator that your social media strategy might be working, but high volumes of conversation do not always equal boosted profits.

There might be an infinite number of reasons why people are discussing your brand, but it may not be particularly relevant or positive, or even worse – it could be critical.

By selecting just a tiny sliver of this conversation, richer insights can be gleaned. In the same way complaints can be extracted, so can ‘intent to purchase’.

Intent to purchase is the conversation that happens online that indicates exactly that – the intent to buy or invest in a brand’s offerings. It might include a tweet from a person expressing their desire to buy a product, a post about wanting to pre-order something before its release, asking for something for Christmas, or any other statement of interest.

To help you get a better understanding of how this works, we are going to take a look at how monitoring intent to purchase has made a difference for two global brands.

In our “Social Media Across the Business” report, released last year, we focused on six retail use cases, including H&M, the second largest fashion retailer in the world.

Over the period studied, H&M ran four major celebrity endorsement campaigns. One of the purposes of our research was to look at which celebrity had the greatest effect on not just conversation, but on driving intent to purchase. 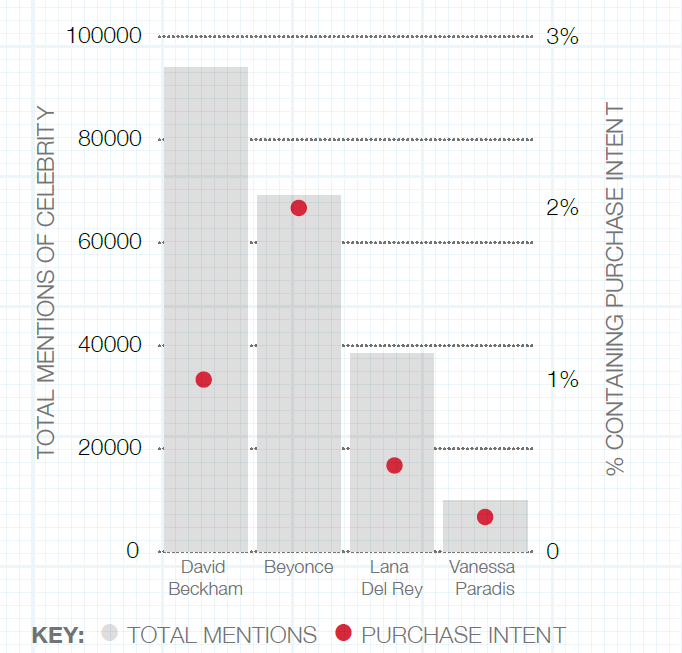 It transpired that even though there was a higher volume of discussion in relation to one of the celebrities the brand sponsored, David Beckham, it was actually Beyonce that drove more of this intent to purchase conversation.

Why does it matter?

In H&M’s case, it knows that sponsoring a celebrity is going to get customers (and potential customers) talking about their brand. Though that can be easily measured, knowing what kind of conversation is provoked is another matter entirely, and H&M can more closely tie this conversation to sales by looking at the intent to purchase volumes.

Indeed, much of the conversation about David Beckham centered on his, erm, underwear, and may well have been of much lower value to H&M than the Beyonce conversation.

As celebrity endorsement, in most cases, involves a lot of resources invested by brands, one key advantage of monitoring intent of purchase is getting a better understanding of the potential ROI of each endorsement – in granular terms relating to the brand’s objectives (sales, desirability of products) beyond simple buzz metrics. 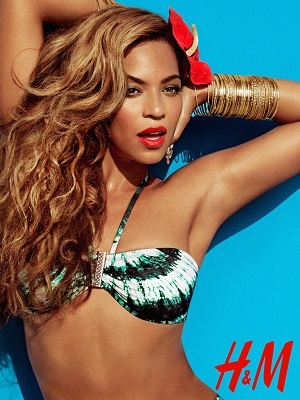 How did we do this?

The chart is the result of a custom purchase intent query set up in Brandwatch, which intelligently searches for key terms and expressions, such as “need to find”, “gonna buy”, “will get”, “going to purchase”, and so on.

The second example features a client we worked with intensely over the past few years. Unfortunately we’re not allowed to reveal who that is, but it is one of the world’s largest games publishers.

The company was having a tough time matching conversation volumes around their brand with sales numbers.

When trailers, previews and teasers were released, spikes in conversation were noticed, but this didn’t appear to have any bearing upon final sales figures once the game was launched.

It conducted a detailed research programme in order to investigate the nature of different peaks, and which conversation stage (pre-release, release or post-release) has the closest relationship to sales figures.

The research also aimed to determine whether the volume of intent-to-purchase mentions around different publicity events had any correlation with commercial performance.

A key insight here is that rather than monitoring for simply buzz, the company could listen to just purchase intent mentions, and gauge the success of their promotional activities extremely accurately.

One of the main reasons that pre-launch promotion is conducted by publishers, such as magazine previews and video trailers, is to entice customers and convince people that the game is worth buying. The feedback (measured in purchase intent mentions) to each item of publicity can then be used to measure the effectiveness of each marketing item.