How Journalists Can Use Social Data to Create Must-read Content

If brands and organizations all over the world are embracing large scale social media monitoring data to enhance their business, can’t journalists do the same, writing sharper and more informed articles, and ultimately contributing to better journalism?

Twitter has emerged, perhaps unsurprisingly, as the platform that journalists love to use. It’s rare to watch any news show or read an article without coming across the author’s Twitter handle.

In this article I’ll be discussing social media monitoring data and how it can be applied in journalism to create must-read content.

Working with a lot of gaming brands, sports journalism immediately comes to my mind.

In the recent months we’ve been looking closely at data from events such as the Cheltenham festival, the Grand National, the Champions League showdown between Barca and Juve, and not least the biggest boxing event of all time; Mayweather vs. Pacquiao at the legendary MGM Casino in Las Vegas.

It’s not uncommon for journalists to quote directly from Twitter.

Manny Pacquiao’s own post, below, was one of the most quoted running up to the match.

14 years in the gym for 1 night in the ring. #MayPac pic.twitter.com/VWWxeEkyN9

Social media and the journalist of today

Social media arguably does journalism both good and harm.

On the upside is that basically anyone can contribute to a story, but at the same time that’s also its biggest downside. Verifying facts and checking sources have come to be daunting tasks in today’s fast-paced social world.

But there’s one bit of social media that most journalists have not yet adopted, and that’s the use of enterprise class social media monitoring systems, adding the ability to create stories through big data.

Going back to the #MayPac fight, certainly a lot of articles written both leading up to, and during the event, included snippets of social media content.

But very few probably looked at the big data behind all the online buzz and used that information to shape their story. 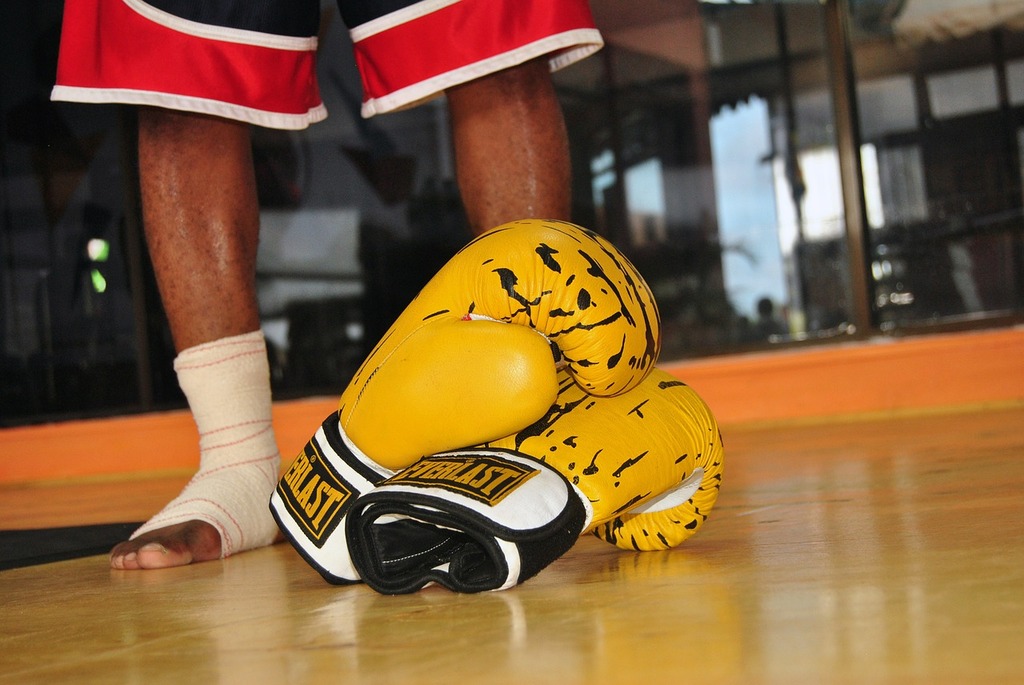 A journalist today, covering a story on British sportsbooks’ activities around the fight, probably would look at what the big sportsbooks were Tweeting about by checking their Twitter feeds one by one, and maybe doing some keyword searches – a very manual process and one that is very limited in terms of what you can discover.

Now – imagine that we equip our journalist with a social media monitoring dashboard, powered by search queries that have looked at all online sources for contextual references to the match – considering all relevant hashtags such as #MayPac and #PacMay, and variations of the fighters’ names in title and body texts.

Taking news articles to the next level with social data

A journalist shouldn’t just want to keep repeating the same story as everyone else. They should want their own fresh scope.

Looking at the social media monitoring dashboard, I’m now able to see exactly who’s blogging, Tweeting or writing about the fight, and as I’m covering this story from the aspect of sportsbooks, I’m able to see which sportsbook has been most frequently mentioned, by who and when.

I’m also able to see an overview of the surrounding topics for each sportsbook related to the fight.

Now, this is data that I could never have found by using only the native Twitter platform or by using Google.

The volume of data is just way to large to manually compile. What I have now is the ultimate discovery dashboard for starting to dig into each author, source and subject to see where there are things worth writing about.

The data may tell me that most people talking about the fight related to Betfair talk more about Mayweather, whilst William Hill has a much larger percent of their social media buzz related to Pacquiao. 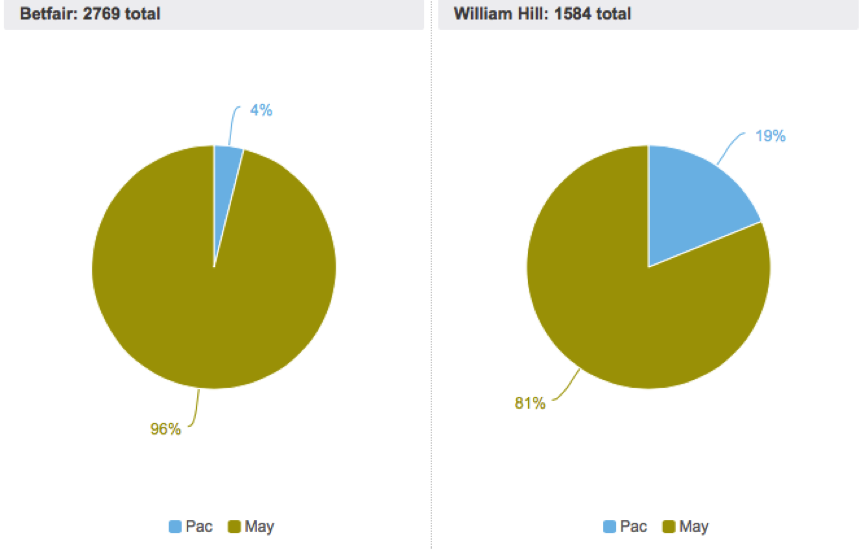 I’m also able to look at the fight related buzz for different brands during the actual day of the fight.

Bet365 had a big push just before the fight started, and the Paddy Power brand was dominating the buzz during the fight much thanks to their real-time marketing efforts. 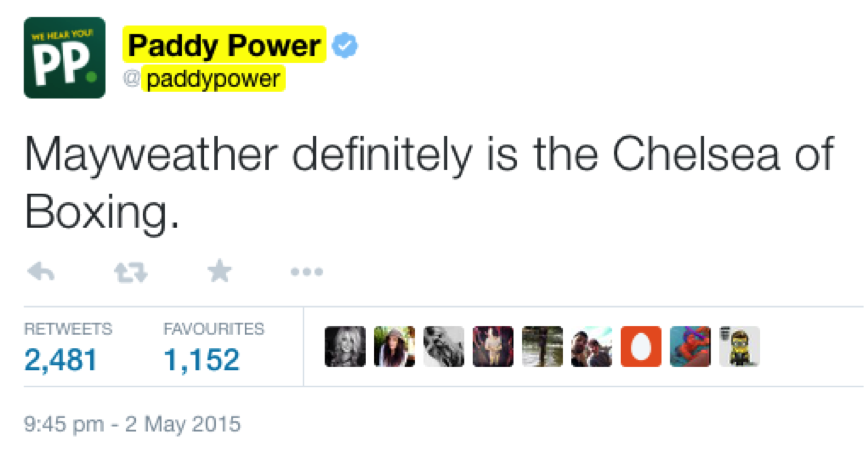 Working my way through the data I sifted through the combined topics of all the sportsbook related buzz. 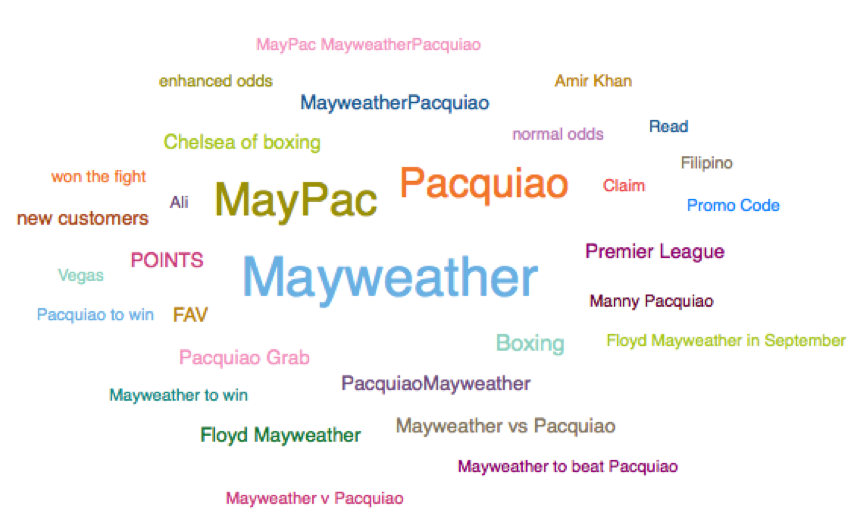 Certain topics interest me more than other and by plotting them on a timeline I can see exactly on which day which topic occurred.

When I’ve picked my topic or a story to cover I start reading through the mentions. But I also want to get a better understanding for the audience of these topics, so I run them though the demographics engine showing their interests and professions. 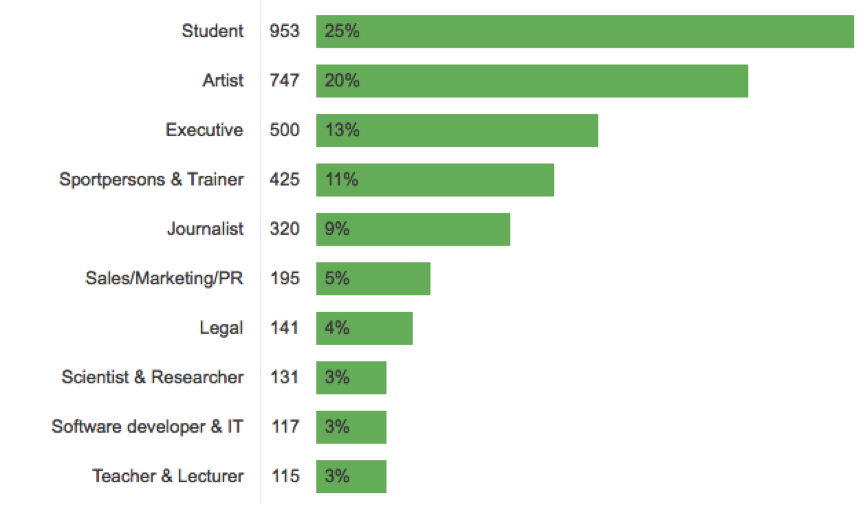 As a journalist covering this story I’ve more data available than any of my colleagues.

I can unearth stories in the data that my colleagues couldn’t and I can back up my arguments with real data. The use cases are close to infinite, and any journalists undertaking investigative research will find social media monitoring data extremely valuable.