We use Brandwatch Audiences to list the top ten robotics influencers on Twitter. Who will be the number one voice in robotics? Find out here!

The other night I watched a TV show in which a robot sorted out an argument between friends by giving one of them an on-the-spot lie detector test and saying it believed they hadn’t slept with the other person’s boyfriend. The friendship was saved.

If this is the future, I want to know what else is coming. So I used Brandwatch Audiences to find Twitter’s foremost voices in the robotics conversation.

For this research we used Audiences to search for individual accounts that that have tweeted about robots and include a term relating to robots in their bio (robot, robots, robotics) etc. We then ranked them using influencer metrics.

Once we had the 20 top influencers ranked, we picked out the ones we found most compelling.

We were sad that only a couple of women made the top 20 robotics influencers ranked by Audiences, but those who did are awesome – make sure to check out their accounts and content.

Our list includes a mix of robot creators, investors and commentators who are making splashes in the robotics conversation.

As we mentioned before, we searched for individual accounts and tried to make sure that everyone in the list was a real person (we say “tried to make sure” because the authors could just be really convincing robots themselves.) These accounts are handpicked from a list of influencers – so the rankings here show a mix of data generated influencers and human preference.

Rick prides himself on being an influencer in robotics.

He’s also a fan of VR and AI and tweets interesting news about tech to his 200k+ follower base.

#Robots Get an ‘Undo’ Button that Could Help Them Learn Faster – MIT Technology Review https://t.co/54CGGdmAJf pic.twitter.com/sAUF0zkuS1

Jamie Burke is a tech investor with an interest in robotics.

He’s a prolific tweeter who clearly keeps an eye on the latest developments.

explaining to my daughter that in my job I work with people who make robots ?she does not believe me.

As well as having a really cool name, VonVictor V Rosenchild is Founder, Chairman and CEO of HubBucket, a tech R&D company.

Khalid Hamdan is a “future thinker” interested in robotics, 3D printing and VR.

He shares all kinds of visuals on emerging trends. The one below is slightly terrifying.

The advancements is robotics from @BostonDynamics are really mind-blowing pic.twitter.com/6akmrlPNE9 Video via @mashable #robotics #robots #technology

A scroll through his tweets reveals a whole lot of robot-related content from all kinds of sources.

As well as writing inspirational books, Bob Violino is a keen tweeter on robotics and other tech.

Expect topical news on the tech of the day.

#Monkeys controlling #robot arms with their minds show how brains can be reprogrammed https://t.co/FUZWoAlnw1 via @techcrunch

As well as political commentary, writer Kelsey shares opinions on all sorts of futuristic topics – and not all happy ones.

Everyone's captivated by the humanoid robots but the real progress and, say, military utility, is in the quadrupeds https://t.co/uEL7NKQSth https://t.co/ad41fnsgLX

According to her bio at the time of writing, Dr Pippa Malmgren is co-founder of H Robotics, an author, a Presidential advisor and she regularly speaks on robotics and the like.

I’m psyched to come talk about my experience working in robotics with AI. Many social issues to consider. But raging unemployment is not one of them ?. @H_Robotics @erikbryn https://t.co/oDszM1rT4C

While Dr Malmgren, above, doesn’t agree that raging unemployment is a worry, Martin Ford’s book “Rise of the Robots: Technology and the Threat of a Jobless Future” may have some counterpoints.

Robots are coming for the jobs of 800 million worldwide #RiseoftheRobots@RichMiller28 https://t.co/uqB3V9PCM4 via @technology

She’s a robot creator and the products of her work often have comedic uses.

Need to figure out how to pop bubble wrap with this thing. My work is important. This is important. You should care about how important this is. pic.twitter.com/LQfQr84GNv 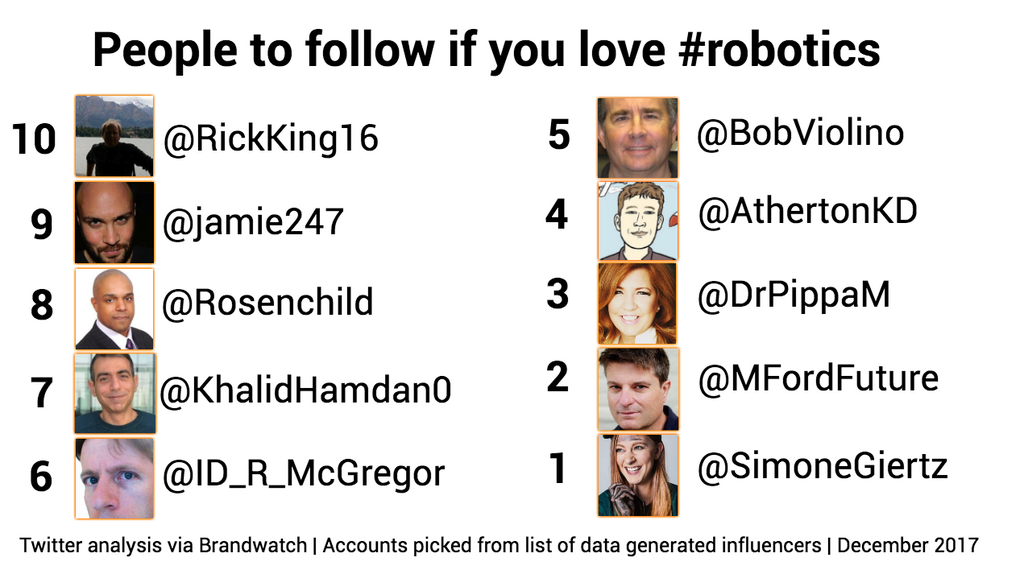 Brandwatch Audiences can help – whatever your niche.

Why not give it a go yourself?