Have a guess. How many brands do you think would respond to a direct, tagged question on Twitter? How long do you think they would take to do so?

In early 2015 we embarked on a piece of research to understand more about how mature social media operations are in retail brands in the US and the UK, and got answers to these questions, among others.

After selecting almost 100 brands and tweeting over 300 times from the accounts of our community management team, supported by data gathered using Brandwatch Analytics, we put the world’s leading retail brands to the test.

Each brand was presented with three types of tweet.

A neutral comment about that brand, including a @tagged mention

Need to spend my Christmas gift card from @Kohls before I forget!

A direct question targeted towards the brand’s @handle

A complaint about a brand with no @tag

Office Depot is dead to me. Worst customer service ever.

Tweets were sent from accounts with similar follower counts, generic bios and within the same working-hours timeframe (adjusted appropriately regionally).

Some of the key findings from this research are below.

Under two thirds (64.6%) of the retail brands we tweeted targeted @questions to managed to respond within the five day period of the study (none responded after that window either). UK brands were more likely than US ones to respond, with 71.4% compared to just 59.5% in the US. 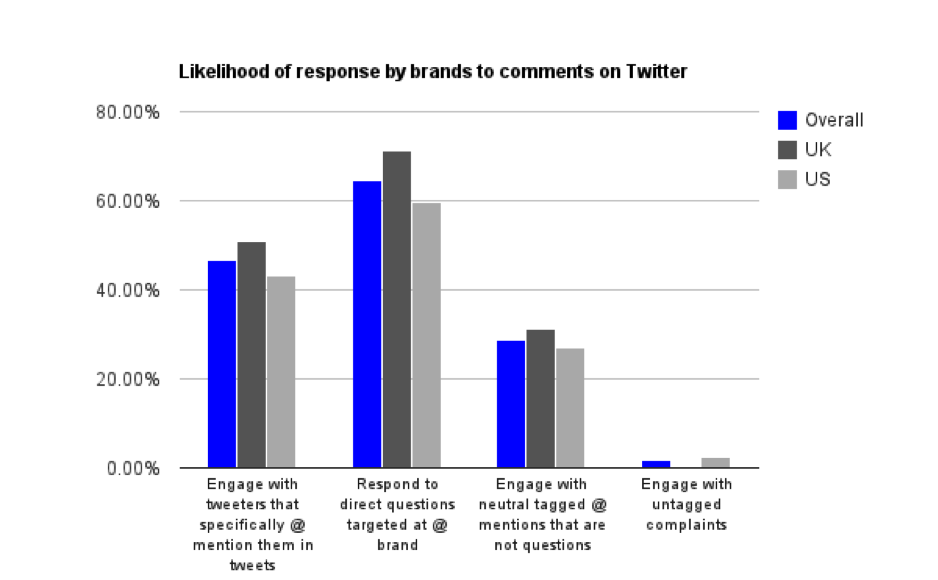 Retail brands were even less likely to respond when the tweet did not include a direct question, even when they included the official @brand handle.

Only 28.8% of studied brands engaged with these neutral @tagged comments, rising to 31.3% for UK brands and falling to 27% for US ones.

Although direct questions are more likely to generate a response from retail brands than neutral @tagged comments, the response time is much slower. 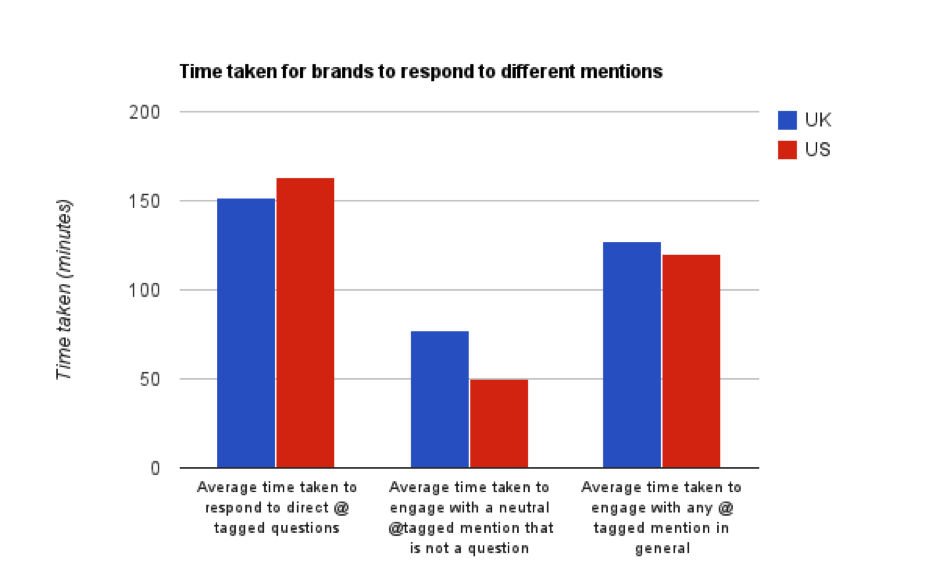 American brands are quicker at engaging with generic @tagged comments, taking on average just 50 minutes to engage with @mentions that don’t involve a question. UK brands take just over an hour, at 63 minutes.

Questions are resolved after two and a half hours (157 minutes) on average. UK brands are slightly quicker at 152 minutes, with US brands taking 163.

Just 11.2% of retail brands respond to questions within one hour 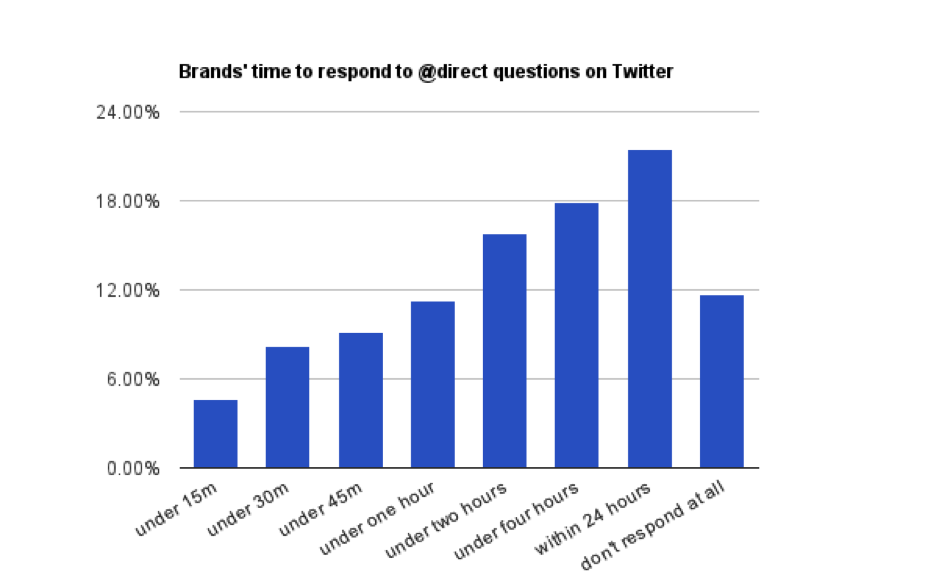 The swiftest brands were BestBuy and Nordstrom, which replied within a single minute, followed by rapid efforts from Ocado, Macy’s, Sears and Schuh, all at no more than than three.

@ChelseaVarney We offer In-Store Pickup for online orders. What are you interested in purchasing? ^Blake

@RuxandraRux Let us know which goodies you decide you couldn’t live without today. :)

Most brands retain a collective identity when addressing customer questions

Just over two thirds (69%) of retail brands on Twitter choose to respond to questions as a unified brand voice, whereas 31% use named individuals or initials to communicate in a personal way. When individuals were identified in the brands’ responses, it was slightly more common to use initials than it was to write out full first names of service staff.

When names were used, hyphens were the most popular way of separating it from the tweet text, and when initials were used a ^ was the only character used to separate them from the main message.

Of brands that respond to questions, the most common approach is to resolve them directly on Twitter

The most common tactic for retail brands was to respond to the question asked by writing an answer or requesting more information within a single tweet – 52.4% of brands took this approach. 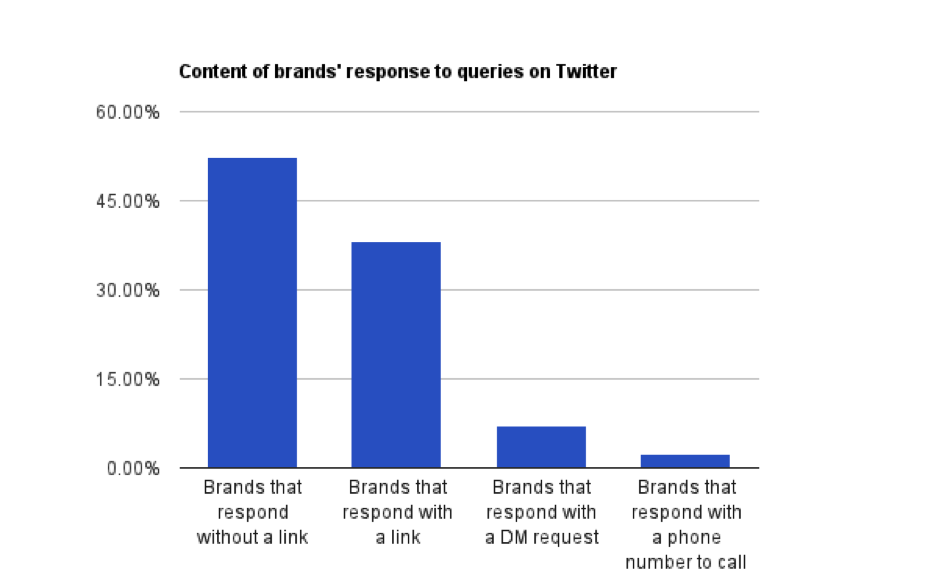 Another popular method of response was to point to a web link containing more information or details on a resolution to the question, such as a deals page or particular item for sale.

Very few brands attempted to take the conversation away from Twitter altogether, with 7.1% using direct messages to take the issue to email, and 2.4% offering a customer service phone number.

For neutral @tagged mentions that do not include a question, the brands that choose to engage usually attempt to start a conversation

Although just 28.8% of brands engage with neutral comments that feature their @handle in the tweet, most of those choose to strike up a conversation as a response. Just under a third of these brands use Twitter’s ‘favourite’ feature to acknowledge this type of tweet, but do not tweet in response.

Brands still have a long, long way to go to meet consumer expectation

Most people expect a response from a brand within an hour, according to research by Lithium. This is supported by plenty of other research that suggests brands are still falling short of expectations in dozens of ways.

That over a third of brands fail to respond to direct questions, and nearly every single one ignores complaints that are not specifically @tagged with branded handles is a clear sign that the retail sector isn’t good enough at social care on Twitter.

Though Best Buy deserve a special commendation for responding to all three types of tweet within three minutes, even untagged ones, there is a lot of catching up to do for some brands.