What is Citizen Journalism and How Does it Influence News?

Citizen Journalism has risen alongside pervasive smart phones use, as citizens at the scene report breaking news faster than traditional news teams

When I was at school I did some work experience in the PR department of an emergency services headquarters.

One thing that was made known to me the moment I started was the incredible importance of the press phone.

Hungry journalists would ring this phone consistently throughout the day looking for a worthy news story, and it was never to be left unmanned.

I am yet to return to find out the exact stats, but my guess is that phone doesn’t ring quite as often as it did 7 years ago.

The reason for this is undoubtedly that citizens are now playing an active role in the process of collecting, reporting and analysing news.

What is citizen journalism?

The introduction and intelligence of smart phones enables citizens who are at the scene to report breaking news more rapidly than news teams. We take a look at examples of citizen journalism and the sites driving the change. 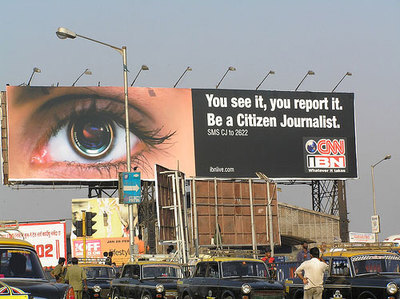 There are a number of platforms available to the public which they can use to upload content.

Twitter is a key player, and the list of news stories that break on Twitter before they do on mainstream media is staggering.  Famous examples include Whitney Houston’s death, which was reported on Twitter over an hour before any mainstream press picked up on it.

Osama bin Laden’s raid and death, one of the biggest news stories of 2011, was reported unwittingly in tweets by a local IT consultant one day before Barack Obama announced it to the world.

Additionally, the live chase for the men guilty of the Boston Marathon bombings in April 2013 saw news channels relying heavily upon the updates of citizens living in the area to establish what was happening. This was captured through videos, pictures, tweets, skype calls, blogs and many more mediums.

User generated content, digital storytelling and consistently available live streaming is fuelling the news with different events from different perspectives. Us ‘normal’ folk are no longer limited to the letters to the editor section, but are relied upon to source the news as well.

There’s an app for that

Apps have been developed in order to support this notion. The Guardian’s ‘Guardian Witness’ app purposely targets citizen journalists, asking them to supply staff journalists with videos, photos and stories of any event they deem newsworthy.

Rbutr.com is another app that helps journalists out with public opinion, using crowdsourcing to provide arguments and counter-arguments on a number of different subjects.

What qualifies as news?

But for something that was once a revolutionary addition to news reporting, it’s now becoming the subject of reporting. More and more often we are seeing news bulletins dedicated to what people have said on Twitter.

And it turns out that not everyone appreciates this new era of news reporting, with many reporting themselves that it’s not news at all.

There’s no doubt that the digital sphere creates a new level of realism that could never be reached through traditional news reporting.

But, is there a line to where this should end and good old traditional journalism should recoup? We’ll be listening and analysing at every step along the way.