Research: The Rapid Rise and Even More Rapid Fall of 3D Movies

When Avatar premiered in 2009 many predicted that 3D movies would change the future of cinema. Almost five and a half years on, 3D films have failed...

When Avatar premiered in 2009, many predicted that 3D movies would change the future of cinema . Almost five and a half years on, the stats paint a different picture.

With around 700 new movies (BFI ) released each year, the percentage of films with 3D visuals is getting slimmer and slimmer.

The truth is people are quickly losing interest, but why?

We’ve used the leading social listening platform, Brandwatch Analytics , to crawl through thousands of Tweets and posts to find out.

Analyzing a sample of 1,000 Tweets, we looked at the positivity and negativity from film-goers before and after they watched a 3D movie.

Before taking their seats, the majority of cinema goers were positive about 3D films.

600 of the 1,000 authors analyzed expected a positive experience.

Comments made after the movie showed that viewers’ expectations had not been met. Positive mentions decreased by 50%, whilst the amount of negative mentions more than doubled.

Consumers expecting to see the ‘future of cinema’ were instead paying more for a blurrier viewing experience, and in many cases, headaches.

The 3D aspect drove an increase in conversation, and therefore awareness.

It’s therefore no surprise movie producers quickly jumped on the bandwagon, doing all they could to convert their movies to the three-dimension format.

The Legend of Hercules and G.I. Joe: Retaliation are two obvious examples of bad 2D movies converted into low-quality 3D.

I know what you’re thinking.

If the movie industry is littered with examples of not-so-great movies performing extraordinarily well, why would 3D films perform so much worse in comparison?

There are many reasons, but one of clear importance is the non-adoption from influencers. For every ‘3D is the future’ article, there were three or more articles slating the format.

Those Tweets are from influencers back in the early days of 3D movies, showing clear negativity toward the format.

Before 3D even reached its peak, hundreds of influencers were sharing their early unfavorable experience with millions of potential customers.

4. Too many issues, too little enhancing of the experience

The brutal truth is that most movie viewers can cite multiple problems with the 3D experience.

We analyzed thousands of negative mentions to find which problems were mentioned most often. 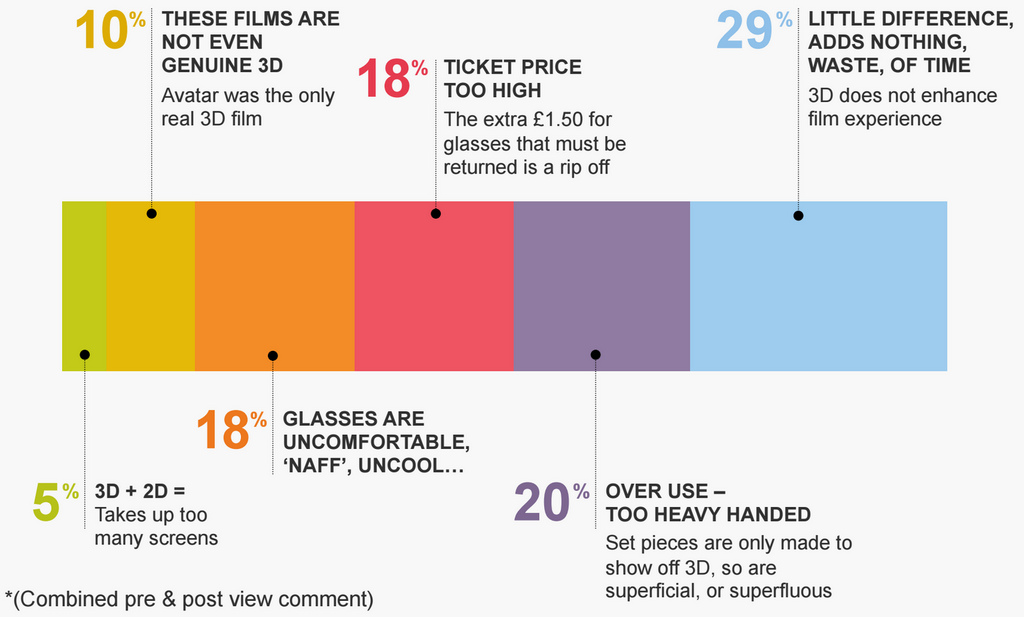 Interestingly, the negative reason alluded to most often wasn’t the cost, the comfort or the quality, it was simply that people didn’t think 3D was that great. For 29% of people, 3D failed to enhance the film experience.

One thing is clear, 3D movies are dying, fast. But that doesn’t mean the movie industry can’t learn from it.

This research clearly shows that movie-goers will sacrifice price, comfort and even quality for something that will genuinely enhance their experience.

So, as companies like Barco  work on creating the ‘cinema of the future’ they should focus on just one thing – enriching the movie experience.

Note: All of the data presented in this article was collected by Brandwatch Analytics – a world-leading social listening tool.