Twitter campaigns are often simple, but some brands have found ways to embrace the platform's features and get creative. Here are some of the best examples.

While Twitter user growth has stalled for now, hundreds of millions of people still use it daily. It also counts many journalists among its users, meaning even non-Twitter users often hear what is happening on the platform.

This increases the appeal to marketers, but, as with much of the internet, there can be a problem lurking in the background: trolls. The public nature of Twitter means hate speech is often in the spotlight. So when looking at the best Twitter marketing campaigns, it is reassuring to see how many of them brought some positivity to the online world.

Cyber bullying has become depressingly prevalent in the modern age. Champions Against Bullying (CAB) states that something mean or cruel is posted to Twitter every 60 seconds.

Their response was to create The Nice Bot, a bot with a difference. Often, bots are spammy creations that only serve to annoy users. CAB instead created a bot that would only tweet positive messages.

Partnering with Twitter, CAB created a spambot that will eventually tweet one nice message to every single user on Twitter. Over 300 million messages will be sent, at a rate of one every 30 seconds.

We hope to make the Internet a nicer place – one tweet at a time.

Personally, I can’t wait to get my own positive pep talk from a robot. The creativity of this campaign, along with the cause and execution, and turning a bad Twitter experience good, all make it worthy of a place in our best Twitter campaigns.

Two years ago, according to a study, women posted five million negative tweets about body image and beauty, making them twice as likely to say something negative about themselves on Twitter as they are to say something positive.

Dove believes that these sort of tweets fill newsfeeds and minds with self-doubt, and decided to run a campaign based on changing this. The Oscars were chosen as the launch, due to the large volume of conversation around beauty.

Dove kicked off the campaign with a 30-second commercial during the red carpet ceremony. They also used visualizations of social data, showing the most commonly used negative and positive beauty words on Oscar night. Dove used targeted ads to reach people already talking about the Oscars and beauty. 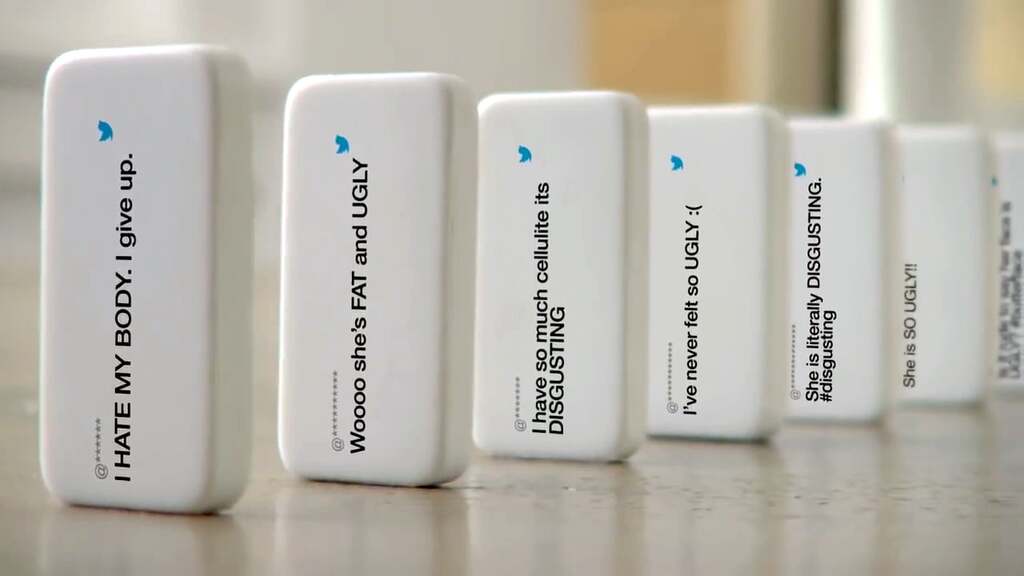 The #SpeakBeautiful Twitter campaign extended beyond the Oscars, trending at MTV’s Video Music Awards, as well as being used in everyday tweets.

The targeted ads, TV spot, using social data to illustrate the point, and making people think about what they post are all strategies that come together to make this twitter campaign.

It should be noted that not everybody appreciated the #Speakbeautiful campaign, with several commentators stating that the campaign was an overstep and insensitive.

In 2015, McDonald’s approached the Super Bowl with a two-pronged attack. In addition to a TV spot and in-store strategy, the company wanted to own the second screen experience as well.

Playing on the “I’m lovin’ it” slogan, McDonald’s set out to demonstrate its commitment to lovin’ by spreading the love to consumers, competitors, and other brands.

The problem McDonald’s faced was that every brand would be trying to make their voice heard. It takes a lot of creativity and great execution to rise above that noise during the Super Bowl. Instead of reacting to events and hoping for a blackout moment, McDonald’s reacted to something big that they could rely on: other brands’ commercials.

Lovin’ the love btwn father & son in @NissanUSA’s spot. RT to try & win a Nissan Altima you could drive someday soon https://t.co/i19FFkZJxP

The nature of the competition drove huge levels of engagement. Brands replied to McDonald’s tweets, further increasing the reach of the campaign. The restaurant chain saw an increase in positive sentiment of 96%, gaining over 630K mentions.

Winner of a recent #TwitterAward, Snickers Australia decided to monitor sentiment as a key part of their Twitter campaign. Looking at 100,000 tweets a week and updated 144 times a day, the price of a Snickers bar would be adjusted accordingly in 7-Eleven stores nationwide.

The angrier the internet, the cheaper the bars would become. This would go some small way to making the world a happier place. This idea ties the campaign into the wider Snickers slogan “You’re not you when you’re hungry”.

A great example of how to run a Twitter campaign around an event. BMW wanted to reach influencers and journalists at CES, the consumer electronics and consumer technology tradeshow.

Monitoring the conversation on Twitter, BMW identified influencers at CES and reached out to them on the platform, offering them a test drive on the BMWi8 – a car that was already sold out and difficult to find.

By becoming part of the conversation around a relevant event, BMW was able to stand out on social. The pleasant surprise and desirable opportunity offered to the influencers ensured their message spread through the world of design, tech and innovation.

These Twitter campaigns all try to address the internet’s trolling problem by bringing some positivity while increasing brand awareness and sentiment.

Many of these campaigns take an established truth and turn it on its head. Annoying bots, brands outdoing each other on Super Bowl day, or negative body image tweets: all have been repurposed. All are great examples of marketing campaigns but they also make us think about what we publish online.

Twitter appeals to advertisers in part because of the huge reach that is possible if people start engaging with your campaign. The positive and unique nature of these campaigns increase their engagement.