John Lewis: Can Serving Up a Slice of Festive Joy Save 2016?

The #BustertheBoxer John Lewis advert offers up a slice of joy in dark times. What can we learn from the social data on it? The React team takes a look.

After a turbulent week, what we really needed was for the festive season to come early. And, so it did.

Yesterday I heard a cover of Oh Little Town of Bethlehem in a homeware shop, and within an hour I’d bought two dozen mince pies, a pack of stollen, ‘frosty fancies’ and a Terry’s Chocolate Orange. If you’re not from the UK, sorry if this is basically Klingon to you.

Essentially what I’m saying is that here in Britain, if nowhere else, it’s now time to get stuck into Christmas.

The two-minute advert, featuring a boxer dog named Buster watching foxes, badgers, a hedgehog and a squirrel bouncing on a trampoline on Christmas Eve before having a go himself, has offered up a slice of joy and provided some much-required light relief in what many are calling ‘the worst year ever.’

Here at Brandwatch, we obviously track pivotal moments such as this.

Super Bowl, elections, festive advertising. The big three. Perhaps not the big three officially, but in my opinion. So, here’s how we reacted on social.

It turns out a TV advert of CGI woodland creatures bouncing up and down has made us far happier than the retailer’s previous, heartstring-tugging offerings – it’s been a real tonic.

Ok the @johnlewisretail ad may not have brought tears but it did bring laughs and don't we need a bit of that in 2016 #bustertheboxer ❤️??

#bustertheboxer has made 2016 so much better, I cannot stop watching his cute face ?

Those talking about the advert on Twitter were very positive. 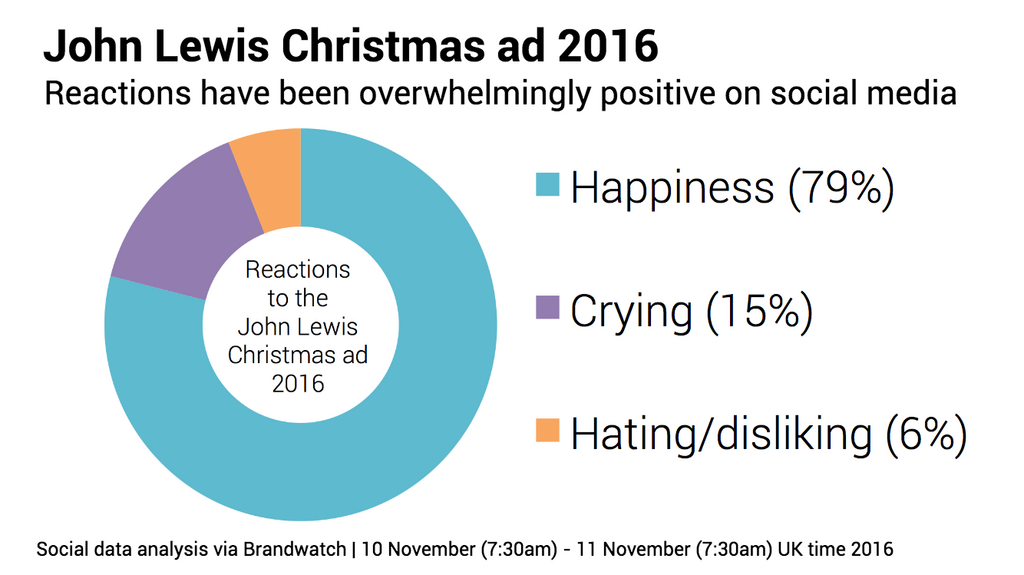 Our CMO, Will McInnes, spoke in The Independent yesterday on why the campaign has given us the feels.

“As marketers, we know that a great ad is all about eliciting emotions.  It’s classic big brand storytelling, meets distribution in the social age. Essentially people won’t share boring content and John Lewis knows it. In a world where our attention is pulled in so many different directions, it’s a reminder that a good story still matters.”

The 2016 campaign is a return to using animals as the stars.

Last year saw John Lewis ditching the CGI fur for real humans for ‘Man on the Moon’, but slightly more men (a 1% increase) have discussed this year’s offering.

Do men prefer animals to humans? I mean, I do. Animals are way better than people. You’d never catch a squirrel running for president despite knowing it’s incredibly under-qualified. ANYWAY.

Overall though, as usual, it’s women taking to Twitter to talk about the campaign.

Brandjamming till the break of dawn

Another interesting facet of this year’s campaign has been a ‘brandjamming’ short film released by campaigners ‘Stop Funding Hate‘, a collective who rally against “a culture of hate perpetuated by the media.”

As reported on CampaignLive.com;

After John Lewis released the spot on social media this morning, Stop Funding Hate reacted with its own new video featuring footage from the brand’s previous ads as well as ads from other retailers such as Sainsbury’s and M&S.

The video contrasts the caring messages in the Christmas spots with the hostility towards foreigners in the pages of the Daily Mail, The Sun and the Daily Express.

Wording (set in John Lewis’ familiar font) encourages viewers to join the campaign, which has already run petitions targeted at the likes of Iceland and Virgin Media asking them not to advertise in variously, The Sun, the Daily Express and the Daily Mail.

At time of going to press, we have counted that just over 10% of the buzz around the John Lewis campaign refers to the Stop Funding Hate campaign.

A spokesperson from the organization told Brandwatch that the ad cost just £100 to make, so netting 10% of share of voice is pretty exceptional ROI. 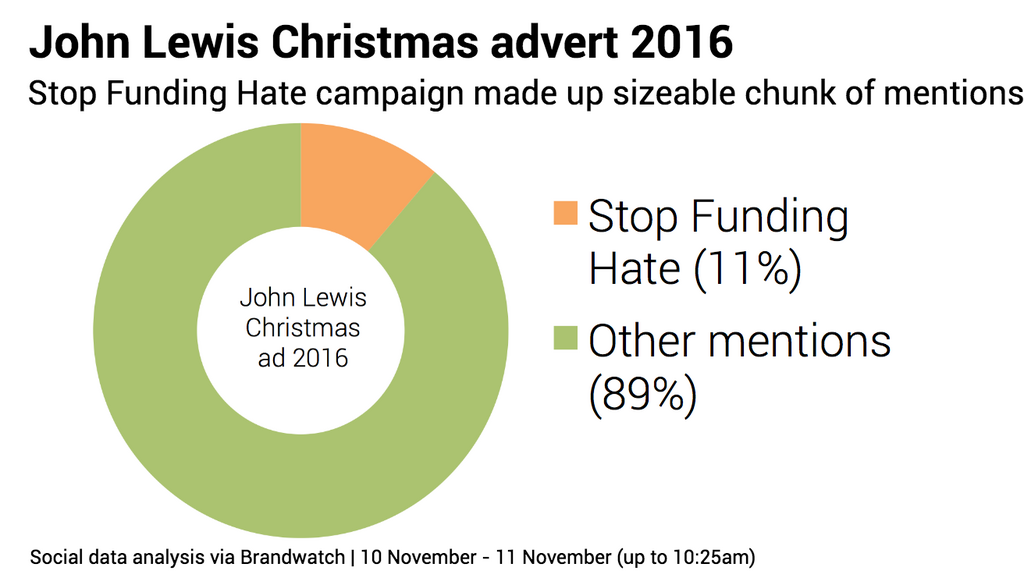 Reminder: you can’t please everyone

it wouldn’t be a British campaign without attracting a fair amount of cynicism. Has 2016 just taken too much of a toll on the general public? Can Buster the Boxer help foster positivity across the nation?

These tweeters are perhaps not able to be saved.

Well, I was pissed off with Trump & now totally underwhelmed by the new John Lewis xmas ad. #bustertheboxer bored me.
2016 has been shit.

No, the John Lewis Christmas advert is not a silver lining to 2016's black cloud.

Just to add a dismal cherry to a rather unpleasant 2016, the John Lewis Christmas advert is fucking shite.

Here at Brandwatch React, we tend to agree with Radio One’s Greg James. Roll on, 2017.

Disappointed that this year's John Lewis advert is funny and didn't make you cry? If it's tears you're after, I suggest putting the news on.