Hundreds of Sightings, One Terrified Analyst: Using Social Intelligence to Hunt for Ghosts

The Brandwatch React team goes on a ghoul hunt, tracking reports of ghost sightings on Twitter, as the Halloween weekend begins.

Ghost sightings are being reported in their hundreds on Twitter.

In the spirit of Halloween we decided to do some spooky social data analysis (because that’s just how the Brandwatch React team gets into the party mood).

If you don’t believe in ghosts, perhaps this post will change your mind.

We tracked mentions of “I saw (or seen) a ghost” amongst a few other variables on Twitter while removing retweets and mentions like “if I saw”, “think I saw” etc. to try to get an idea of how many people were talking about seeing ghosts around the world.

While there may have been a few speculative mentions floating around in the data, we found over 900 potential sightings going back to January 2016. OoOoOohhh.

How to avoid ghosts

We took a look at the times of day tweeters were most likely to discuss ghost sightings. If you want to avoid seeing a ghost we recommend keeping your eyes firmly shut around 4pm. You can feel most relaxed between 5 and 6am.* 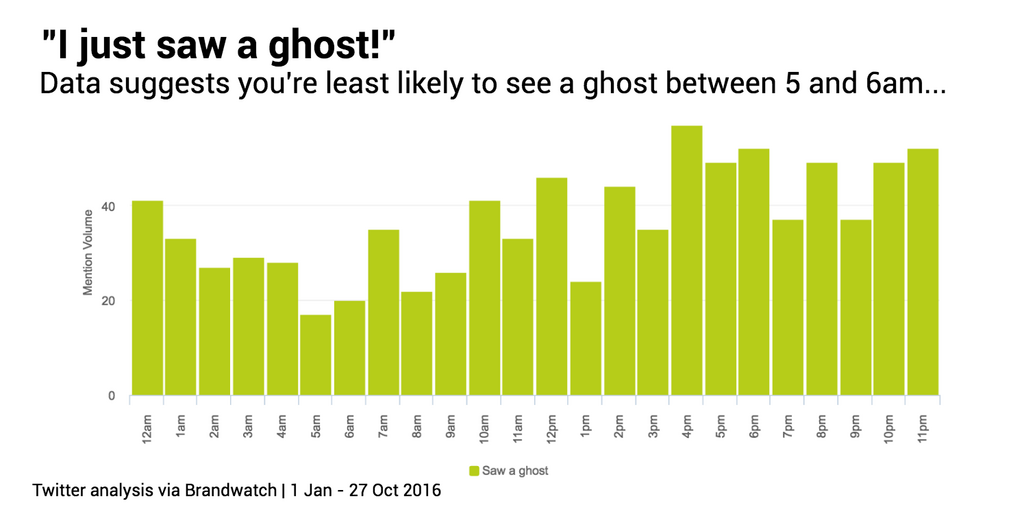 Also, you’re most safe on Tuesdays and Thursdays, but you should hide behind the sofa on Monday, Wednesday, Friday, Saturday and Sunday. 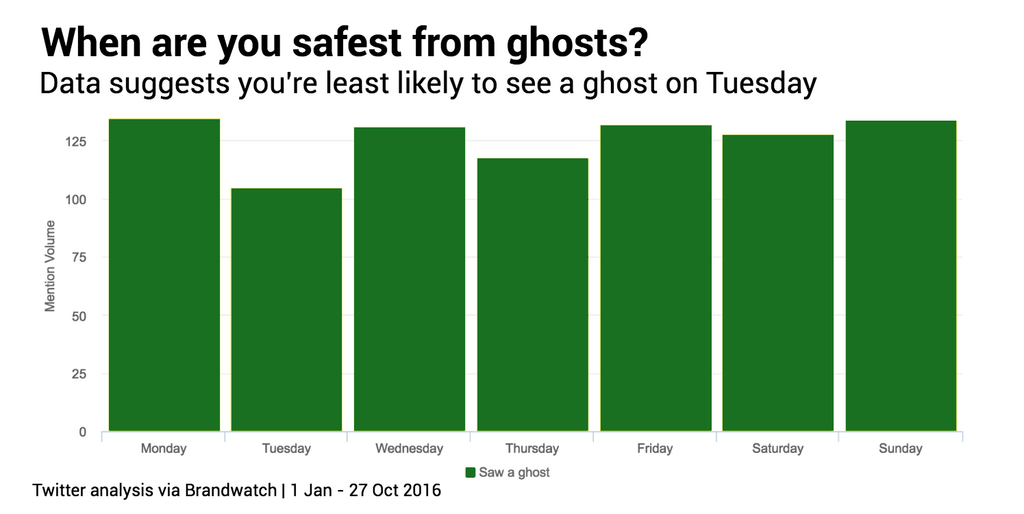 *Just in case you decide to take this advice seriously, please note that not all mentions in this dataset are reports of sightings made directly after seeing a ghost. Among the “I just saw a ghost” sightings are also “I saw a ghost last year” etc. The above graph only shows what times of day people are most likely to talk about seeing a ghosts, not ghosts’ favorite times of day to appear.

We took a look through every ghostly tweet that included an image to see what kind of ghouls had been snapped. Like our own personal episode of Most Haunted, based solely within the Brandwatch platform, here are the most terrifying.

Mara caught one on her desk.

I saw a ghost near my table… :-) #ghost #steam pic.twitter.com/SPisW9grQj

Photoshop was definitely not involved in this horrifying ghost sighting.

I don't mean to alarm anyone, but I've seen a ghost. #RNCinCLE pic.twitter.com/g8YuwIshlm

You may have noticed a recent post of ours in which we tracked clown sightings at the height of the “creepy clown craze” with similar exclusion terms.

We found thousands of clown sightings and the research shed light on how widespread the issue was.

Tracking ghost sightings as a fun Halloween exercise has returned quite different results – a much lower mention volume and a whole lot of sarcastic and fake sightings.

I think my bristol shop is haunted! I spotted a ghost and got a photo of it

Sifting genuine sightings from the fake was no easy task, but we spotted a few patterns.

In many cases where people seemed to genuinely be reporting seeing ghosts they were often feeling unwell or not in a state of alertness or sobriety.

I had a sudden onset headache and I saw a ghost. Not my fault.

I saw a ghost once, (or shadow person) and it sent me into sleep paralysis for a good 20 minutes. Fucking terrifying

Damn it, we forgot to incorporate shadow people into our original search.

Lots of people also reported seeing ghosts years ago or in their childhood. Sadly, as the old phrase goes, pics or it didn’t happen.

It looks like we failed in our mission to find a ghost using Twitter data alone but if you’re a fan of creepy data you’ll probably also be interested in our monitoring of clown sightings and data analysis of Slenderman.