We take a look at the data to see which ads made the most, and least, of the Super Bowl.

This article originally appeared in Adweek.

Every year, the Super Bowl generates one of the biggest social conversations online as over 100 million people tune in for sports’ biggest night. And it’s no secret that brands want in on the action, with 30-second spots going for over $5 million. Brands plan their year around a Super Bowl commercial and can garner their largest exposure with this opportunity.

We used our social analytics platform at Crimson Hexagon to analyze public conversations around two major Super Bowl ads this year: one that failed and one that triumphed. The Washington Post was a surprise success in an otherwise politically tepid show, while Burger King faltered using Andy Warhol footage.

Let’s start by examining the spot from The Washington Post, which ran its first-ever Super Bowl ad. It was a tribute to a free and open press, ending with their slogan “Democracy Dies in Darkness.” The ad was among the more serious of the night and it certainly earned a lot of attention. The Washington Post was among the most discussed brands of the night, behind the NFL, which also ran its own commercial, and Bud Light, which ran 5 ads.

But what made the Washington Post ad so memorable? We looked at the affinities of the Super Bowl audience compared to a general Twitter audience to answer this question. Media channels are a top area of interest. MSNBC, Politico, Univision, and Fox News all rank higher in audience interest than the NFL.

This created the perfect situation for the Washington Post: an enormous audience that is interested in their industry, and an ad from an organization that you typically wouldn’t see during the Super Bowl.

And the cherry on top was how politically silent the rest of the Super Bowl was. We’ve seen it time and time again, with brands like Nike, Gillette, and Patagonia. Consumers respond well when they send a strong message on a current issue.

On the other side of the coin, Burger King’s Andy Warhol ad missed the mark. The ad portrayed documentary video footage of Andy Warhol eating a Whopper. It was one of the very few whose negative conversation surpassed the positive conversation. While it wasn’t received as poorly as TurboTax or Mint Mobile (TurboTax’s robochild was described as “creepy” and Mint Mobile’s “chunky milk” was the catalyst for disgust), Burger King had far more mentions, attracting almost 13,000 posts during the Super Bowl, compared to TurboTax’s 1,600 and Mint Mobile’s 1,500 posts. 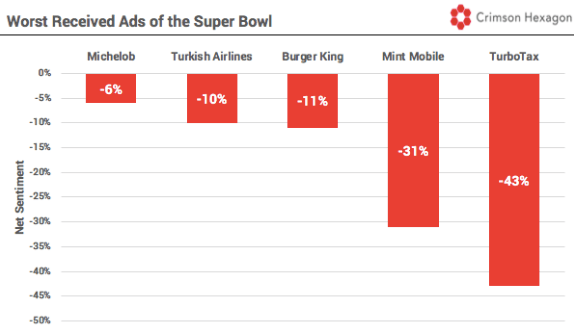 A sample tweet invoked powerful emotions that represented the general reaction to the ad.

Burger King was attempting to capture imaginations with a nostalgic video of a cultural icon. It seemed like a homerun (or a touchdown!). But borrowing a deceased celebrity for an ad is risky business. For example, Prince’s projection at last year’s halftime show didn’t go over well. This year’s Burger King ad had a similar reaction: posts mentioning Burger King and Andy Warhol elicited primarily negative emotions. 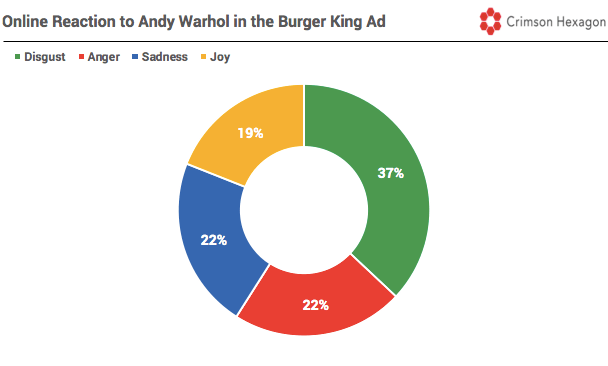 Super Bowl ads are high stakes propositions, and the tenor of the online conversation is a prime measure of consumer reaction. High dollar ads could spark viral content and unprecedented mindshare. Hopefully for the right reasons.