Case Study: How The Guardian Uses Social Data at Its Core

The Guardian News & Media (GNM) is one of the largest English-speaking newspaper websites in the world, with over 130 million unique visitors every month.

Since launching its US and Australia digital editions in 2011 and 2013 respectively, traffic from outside of the UK now represents over two-thirds of The Guardian’s total digital audience.

According to an 2014 Ofcom digital media report, The Guardian is the most trusted news source in the UK and is widely viewed as the world’s leading liberal voice.

As such a digitally innovative organization, it isn’t surprising that theguardian.com was named website of the year at the Press Awards in March 2016.

The Guardian’s online reporting as the Paris terror attacks unfolded, as well as coverage of the effects of climate change on the Mekong river were among the pieces recognised at the award ceremony.

The United Kingdom’s general elections in 2015 would see the 56th parliament be elected.

The elections in 2015 were the first general elections following the end of the fixed term parliament, and were predicted by many to be a closely fought race, the anticipated results were ‘too close to call’ and many believed the elections would results in a second hung parliament, similar to the 2010 UK elections.

Media attention around the 2015 general election was set to be fiercer than ever before, with publications fighting for consumers attention, reporting on live debates and covering the key topics voters cared passionately about in detail.

One of The Guardian’s objectives for the duration of the election campaign was to appeal to the younger voters, a youthful audience who would prove to play a very key role in the 2015 elections.

The research also shows that the youth turnout rate in the UK is the lowest of all the 15 members of the old European Union. 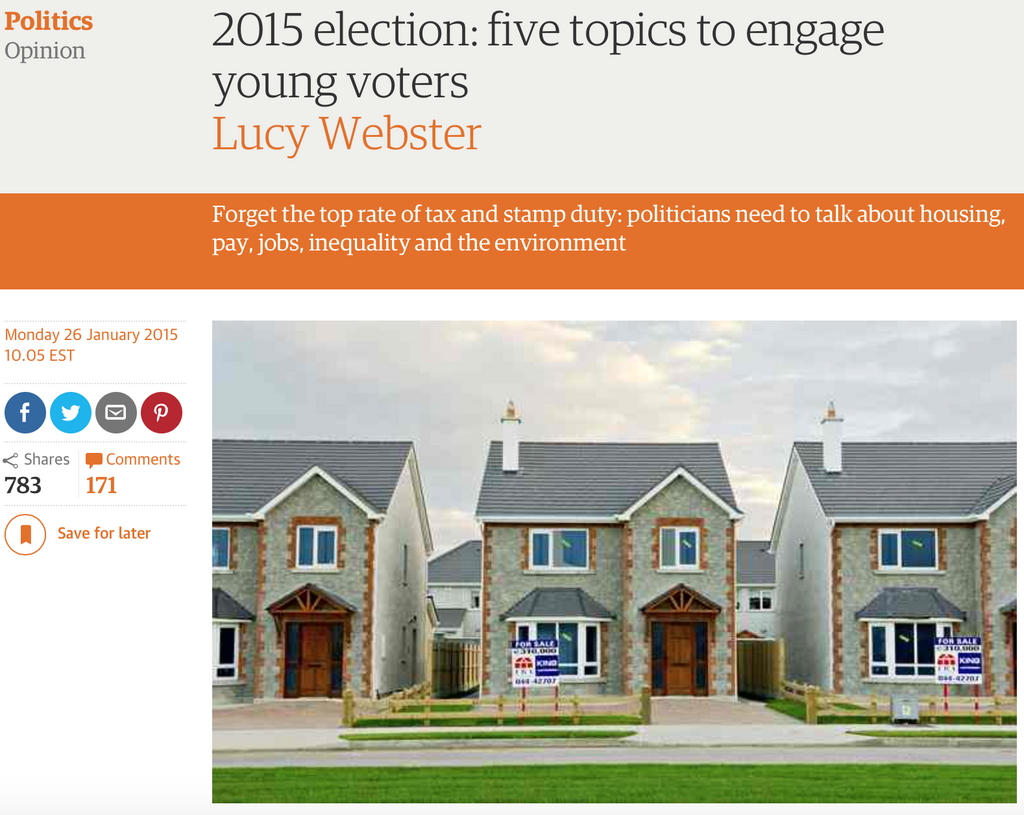 Voters aged 18 to 24 in Sweden turn out to vote at double the rate of their peers in the UK.

All parties in the general election were going to try to connect with youth politics, some perhaps better than others. Remember the Russell Brand and Ed Miliband YouTube interview – it really did happen.

Targeting millennials and creating content that was relevant and that would resonate with the student demographic was a critical goal for The Guardian.

Demographic Insights from Brandwatch Analytics provided The Guardian with in-depth analysis of the people tweeting about its content, including their gender, account type, profession, interests and location.

Being able to focus on a specific demographic allowed The Guardian to understand how conversations were playing out amongst this audience, allowing the publications to improve targeting, campaign planning and optimization of its content.

These insights brought fruitful results to The Guardian. Over the course of the election campaign it saw an increase in its volume of mobile users amongst the 18-24 year olds increased by 18%.

The Media Reform Coalition reported that overall circulation of newspapers declined by 6.6% in 2014–15 and with the general election of 2015 being one of the most covered events of the year, competition was fierce amongst journalists and publications to dominate.

Using Brandwatch Analytics to track the performance of The Guardian and its published articles during the campaign, saw tremendous results for the organization.

In just one week links from The Guardian were shared over 30,000 times in conversations relating to the election, a number far greater than 18,000 from the BBC and 15,000 from The Independent, when looking at the same period.

Brandwatch Analytics gave The Guardian the insight into what topics and interests were being discussed by its target demographic, therefore allowing its journalists to produce content that was more likely to resonate and interest its audience.

“What I like about Brandwatch is the ability to to split the online conversations by general topics and [political] parties. This allowed us to understand how well our content was performing against our competitors on certain subject areas during the elections.”

Throughout the campaign, The Guardian demonstrated how modern, forward-thinking media institutions can gain a competitive edge in a marketplace where advantages are slim, and competition is fierce.

Download the full case study for free for all of the details.