The Way You Measure Your Content Marketing Has Just Evolved

Tracking links to your website on social is now much easier. Brandwatch can even track vanity URLs so you don't miss important mentions.

You may have already read that last week Brandwatch unveiled a new feature – a Boolean operator that lets you retrieve any Tweets containing links to a website, even if the links have been shortened. You can read more about it in the official announcement here.

What makes this operator so special is the second part of its definition: “even if the links have been shortened”.

The vast majority of social monitoring tools can only retrieve links as long as they haven’t been shortened by a URL shortener like bit.ly, Buffer’s buff.ly, Hootsuite’s ow.ly, and several more.

Brandwatch is now one of the very few tools to retrieve all links, whether they’ve been shortened or not. To illustrate why this makes a huge difference it I’ll use the Brandwatch website as an example.

Previously, if you wanted to know how many people linked to your site on Twitter through Brandwatch, you had to do a search for [site] site:twitter. So, to find out how many Tweets contain links to the Brandwatch site, I’d write the following Brandwatch Query:

Running that Query, I’ll see that 114 Tweets linked to brandwatch.com in the last 8 days. Besides linking to the Brandwatch site, those Tweets have another thing in common: all the links in those Tweets are unshortened, like in the following Tweet…

The days of stand alone listening are dead. #GoBeyond https://t.co/Dbr5I8LvpY

We’re missing out on Tweets from people who have shortened any links from brandwatch.com.

Thankfully, Brandwatch use a branded short domain, which means that when you shorten a link from their site, it’ll often begin with brnw.ch/, like in the following Tweet…

I could then tweak my original Query to include those Tweets too:

I now get 446 Tweets linking to the Brandwatch site (a big jump from the previous 114), and only a quarter of them contain unshortened links.

We’ve not accounted for vanity URLs (e.g.tnw.co linking to http://thenextweb.com) and other shortened URLs.

Now that we have the handy links: operator, we can finally have full visibility of all Tweets linking to any site. So, using Brandwatch again as an example, I can now run the following Query:

I now have 969 mentions – a lot more than what we found before the links: operator.

A lot of social tools and platforms shorten URLs for you when you post, and not all of them will defer to your branded short domain (if you have one).

links: tackles that problem, showing you all Tweets linking to your site, whether those links are unshortened, branded, or shortened via a URL shortener or social tool like Klout…

Is this a big deal?

It sure is: before the introduction of the links: operator, we would’ve only spotted less than half of all Tweets linking to the Brandwatch site (46% to be precise).

The same applies to any website out there. For instance, for the same period of 8 days, here are how many links were shared on Twitter from some of the most trafficked sites out there:

I could go on and on, but it’s pretty clear that shortened links are increasingly becoming the medium people use to share links, especially since they don’t even have to think about it: most social tools, plugins and platforms will shorten links automatically, and chances are if the site contains sharing buttons, the links will automatically shorten them.

With URL shortening tools like bit.ly shortening nearly half a billion links per month, it’s extremely important to have a view of those links when you’re looking at who’s driving traffic to your site.

Ignoring shortened links will only give you half the picture, and if those stats are any indication, what you might get for your own site probably won’t even amount to half the picture.

Thanks to the links: operator, you can now fully measure the success of your content marketing and social reach on Twitter.

Part of a bigger plan

Brandwatch have added custom operators in the past, but links: is nothing like them. Links: is part of a bigger plan, a plan that the company has been crafting for some time now.

In fact, links: is closer to its Signals product than any of the other 12 operators in the platform.

Signals is two steps ahead of your Query, finding any related nuances that you may find relevant, even if they don’t exactly match your Query. 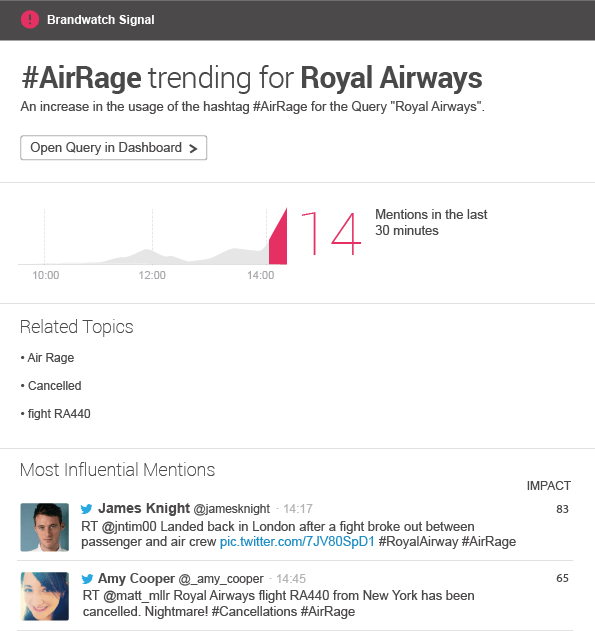 Similarly, links: finds any mentions of people sharing your content, even if they don’t explicitly mention your name, your brand or your products. Both Signals and links: were built to uncover mentions beyond the obvious, helping you see the full extent of your social reach.

Both Signals and links: are signs of a major restructure that is underway for Brandwatch – they’re now going to turbo-charge their platform by tackling five main areas:

Conversations (what’s being said about you, and why?),
People (who’s talking about you?),
Places (where are you being talked about?),
Images (looking at conversations around your brand through pictures and videos),
ROI (what’s my social value?)

Social Intelligence 2.0: Brandwatch is already what I call a social intelligence tool, going beyond what most social monitoring and social listening tools do, uncovering social insights for those who aren’t satisfied with data at face value.

Brandwatch is now planning to join more dots now, stepping further away from traditional social listening tools (Brandwatch has never been “traditional” anyway, in my opinion): whether it’s trawling for pictures and videos to find content about you, or beefing up their already robust platform, expect this social intelligence tool to become even smarter;

Social ROI: This is still a mystery for quite a few marketers, for various reasons. It doesn’t help that a lot of social tools, blogs and social events preach their own ways of calculating social ROI, with each method giving you a different result. It’ll be interesting to see how Brandwatch tackles this area;

PeerIndex: Remember PeerIndex? Brandwatch acquired them a while ago (late 2014), and we haven’t heard much about it since, besides the promise of it being integrated in the platform sometime in the near future. Well, it looks like that time is getting close:Brandwatch promising to let you create custom audiences and segments to better understand your audience is a hint that we’ll finally see PeerIndex reincarnated, somehow, in the Brandwatch platform.

Judging by what PeerIndex used to be pre-acquisition and judging by the analyses they’ve been Tweeting out from their new Twitter handle, it looks like Brandwatch are going to make their demographics, psychographics and location analysis bigger and better.

The future looks amazing for Brandwatch, and this is only the beginning – once again.