First Look: A Tour of the New Brighton Brandwatch HQ

It’s been months in the making, and as of this month, all of the Brighton Brandwatch HQ were finally re-homed and under one roof again.

For the past few months we’ve been spread across two different office locations, and although only a short walk away from one another – so not too much of a hardship – it’s great to be all in one place.

Of course, the new office wasn’t going to be a sterile, boring affair.

With over 20,000 square feet to play with, we’ve now got a pretty cool new work environment. Lots of little cubby holes to sit and work in undisturbed, an airy, open exposed ceiling, bright colours and a whole host of beanbags for a change of seating position.

We’ve posted before about the people behind the product, but we haven’t given you the grand tour of where we do all of that great work yet.

So, fancy having a nose around? Sure. Here’s the reception area, where Dani greets any visitors. I mainly chose to show this as I like the flowers. This is one of two cool little wooden huts. We in Marketing refer to them as ‘The Sheds.’ They’re full of the big beanbags, so a popular choice for a one-to-one meeting or some afternoon cake. The meeting rooms are all bright and airy, with different coloured seating, and big wall-mounted screens to make meetings over Google Hangout with our colleagues in the US and Germany much easier. The reception area, with the Brandwatch Vizia display so everyone’s able to see who’s been talking about us online at a glance! All good things, I’m sure. The kitchen is MASSIVE, and with a fußball table, table tennis, a giant Connect 4 and cupboards full of snacks, it’s always a high-traffic area.

It took a mere 4 hours to get a ‘Table Tennis Ladder’ up & running…who will top the rankings? #insidebrandwatch pic.twitter.com/K5GyXXsLzT Somehow I managed to get a shot of the kitchen empty. This never happens. I made some of the Marketing team show you how happy and excited they are with their new digs. Here they are, doing just that. One of the little cubby holes. You’ll usually find the People Team in this one. They know a good thing when they see it. There are a couple of these cool little phone booth areas, designed to give confidentiality when it’s needed.

With over 150 staff over two floors, even though we obviously love each other’s company dearly, sometimes a little extra privacy is required.

A new office wouldn’t be complete without a party to open it!

We all gathered on the new first floor and had pizza, beer and champagne to celebrate.

Rumour has it that PA and Office Manager, Frankie, had to dash out for extra alcohol supplies well into the night. This can neither be denied nor confirmed at this time.

Oh, and it wouldn’t be a Brandwatch party without a MASSIVE CAKE! 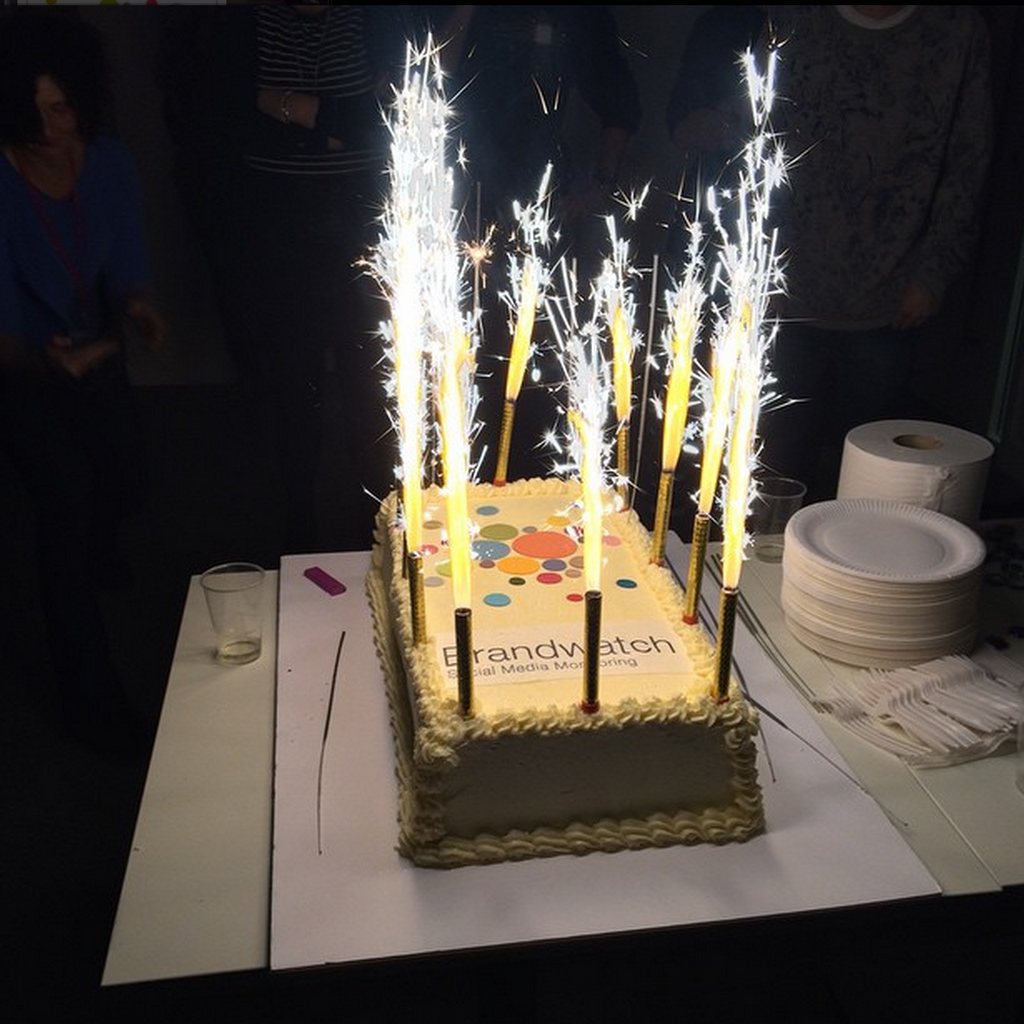 And finally, to play you out, here’s a shot of our monthly sushi lunch. Just because. Fancy joining in the fun? We’re hiring! There are currently over 30 jobs available on our careers page.