After a two-year hiatus due to the pandemic, the Singapore F1 Grand Prix is finally back. This ever-popular, annual event always attracts fans from across the globe to witness the race to the finish line. This year, Singapore delivered on its promises yet again.

Driver Sergio Perez took the winner's medal, followed closely by Charles Leclerc and then Carlos Sainz. But what were the main talking points? Brandwatch analyzed almost 700,000 online mentions over this year’s racing period. Here are the social insights you need to know from the race weekend. 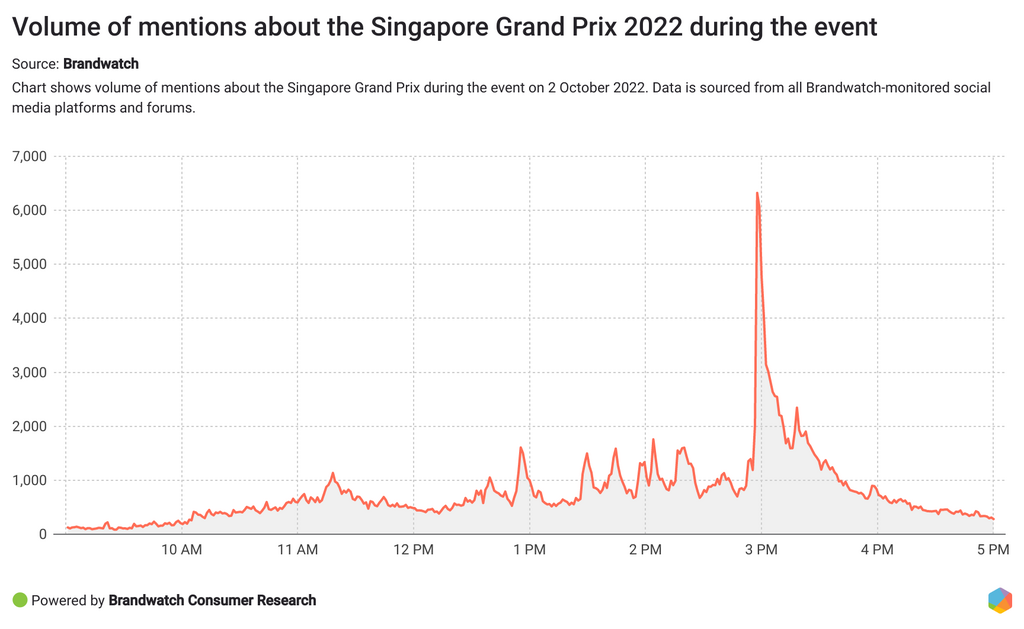 We analyzed social data minute-by-minute from the Singapore Grand Prix. The conversation naturally grows throughout the event, with a huge peak as the winning driver, Sergio Perez, crosses the finish line. Throughout the race, there are a number of smaller spikes in conversation, which can be attributed to drivers crashing or retiring from the race.

By tracking these insights, we can understand that Formula 1's (F1) audience is keen to engage in conversations with fellow fans throughout the race – especially when something interesting happens. If there’s a crash, fans want to know what others are saying about the event.

Using a real-time social listening tool like Brandwatch can help your brand to monitor live peaks in your marketing campaigns, so you can be the first to know what's happening.

Brands can leverage both text and image-based mentions on social. For this year’s Singapore Grand Prix, we tracked both. We used Brandwatch’s image recognition technology to uncover the top logos captured during the event.

Red Bull came out on top when it came to logo mentions during this year’s Singapore Grand Prix, receiving 29% of all image-related mentions throughout the broadcast. One of Red Bull's drivers won the event this year, which explains the huge boost in Red Bull-related image mentions. From fans sharing photos of Sergio Perez crossing the finish line to brands sharing their support, it’s clear why Red Bull came out on top during the race.

Oracle, Salesforce, and Puma came next among the most mentioned brands by logo. These are brands that are heavily involved in the event – for example, Oracle is also a recognizable sponsor on Sergio Perez’s clothing.

It’s clear that sponsoring events with huge followings, like Formula 1, can bring in hundreds of thousands of indirect logo mentions for brands.

Image recognition software allows companies to have full visibility of marketing campaigns and live events. With the high number of sponsorships events like Formula 1 generate, there can be plenty of indirect brand mentions that you might otherwise miss.

Who were the popular drivers?

Ten teams compete in each Formula 1 race, each with two drivers. According to Brandwatch data, the most popular team during the race was Ferrari, who stole a third of all mentions. Up next were Red Bull and Mercedes, with 15% and 13% of mentions, respectively. The most popular drivers were Charles Leclerc, Max Verstappen, and Lewis Hamilton – with 19%, 16%, and 14% of mentions, respectively.

Prior to the race, Max Verstappen had a larger number of mentions. However, as the race played out, Sergio Perez’s mentions skyrocketed. His excellent driving and first-place win changed the conversation entirely. In fact, Sergio Perez's mentions increased by an impressive 870% compared to the start of the race.

By breaking down conversations into smaller, more granular pieces, we can analyze mentions to understand the themes of these online conversations better.

What else was popular among fans?

Formula 1 isn’t entirely about the drivers or teams, and this Singapore Grand Prix was no different. From a weather-delayed start, race conditions, and safety cars, there were a few hurdles that fans discussed before and during the event. Now let’s look at the mentions of these topics in correlation to the race. 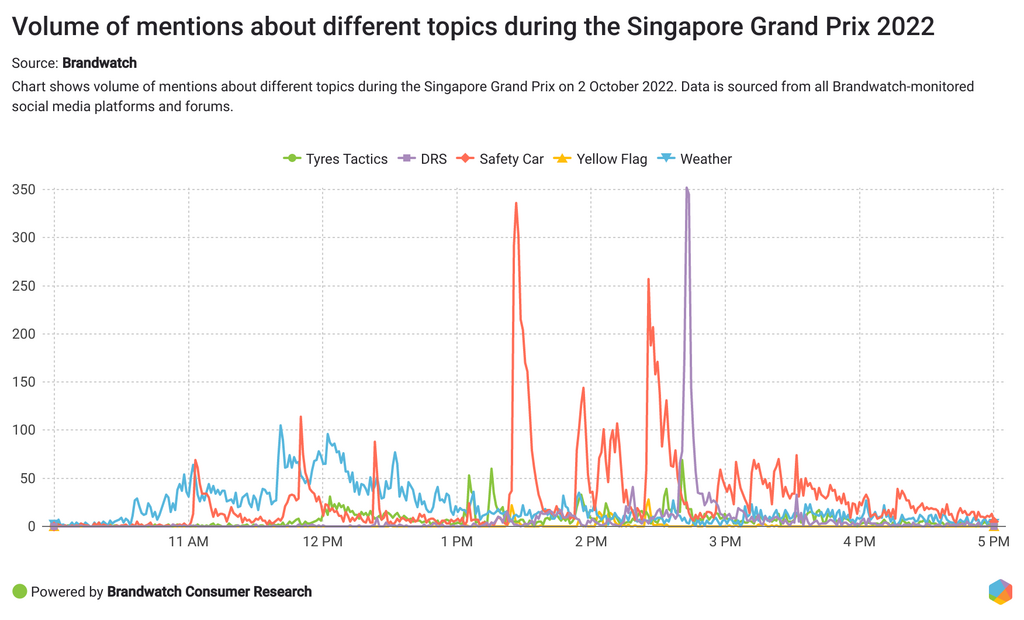 The weather was the biggest talking point leading up to the event. DRS, or Drag Reduction System, which relates to a feature of the cars, was only mentioned towards the end of the race — however, this caused the highest spike in mentions relating to these topics during the event.

Discussions around DRS and tire tactics mostly contributed to angry mentions among viewers. Still, the frequent introduction of the safety car, and its potential influence on the result, was the key driver of fearful mentions throughout the race.

Which brands stole the show?

This event saw the return of Formula 1 to Singapore since the pandemic two years ago, so it isn’t surprising that certain brands have jumped onto the bandwagon to get involved with the peak in online mentions.

Some brands, including Google Chrome, jumped to share their thoughts on the Grand Prix – even using it as a chance to share their latest F1-related products.

Match your browser to McLaren’s updated livery ahead of the #SingaporeGP this weekend: https://t.co/9kBd5pnyee pic.twitter.com/KrRkrbpi6P

Snapdragon also got involved, sharing a competition for fans to get a chance to go to a Grand Prix in person. This is an excellent marketing tactic to reach an audience of already engaged fans during a live event.

Watching the #SingaporeGP on your TV is good - but attending the #USGP in Austin Grand Prix in person is great. Learn how you could win a VIP trip to cheer on @ScuderiaFerrari below. #essereFerrari #RepYourRedChallengehttps://t.co/BYsMh9fCKU

Utilizing social listening tools to follow live events is ideal for any brand wanting to follow the action closely. With live events, fan conversation changes by the minute depending on who’s winning – or any exciting hiccups throughout the event. Brands can benefit from tracking peaks in conversation to stay ahead of the game.