#PlantBased: An Exploration of Online Vegan Communities and Conversations

How do online vegan communities manifest themselves online? What do they look like, who frequents them, and what do they talk about? The Brandwatch React team investigates.

I hear more about veganism every day here at Brandwatch, whether it’s another colleague converting to Huel, or discussions of favorite recipes in our #dietary-requirements Slack channel.

Our CMO Will McInnes has got involved too, and we haven’t heard the end of it since. The fact that Will has gone vegan has become so much of a company meme that our CEO bought him a T-Shirt that says “VEGAN AS FUCK.”

My personal sense that interest in veganism is growing may have mainly been inspired by office chat and novelty attire, but there’s far more solid evidence that veganism is growing in popularity, including that we’re more likely now than at any time in the last 12 years to Google the word “vegan”.

Looking at that upward trend, I decided to use a number of the Brandwatch tools I have at my disposal to explore how vegan communities are presenting themselves online. 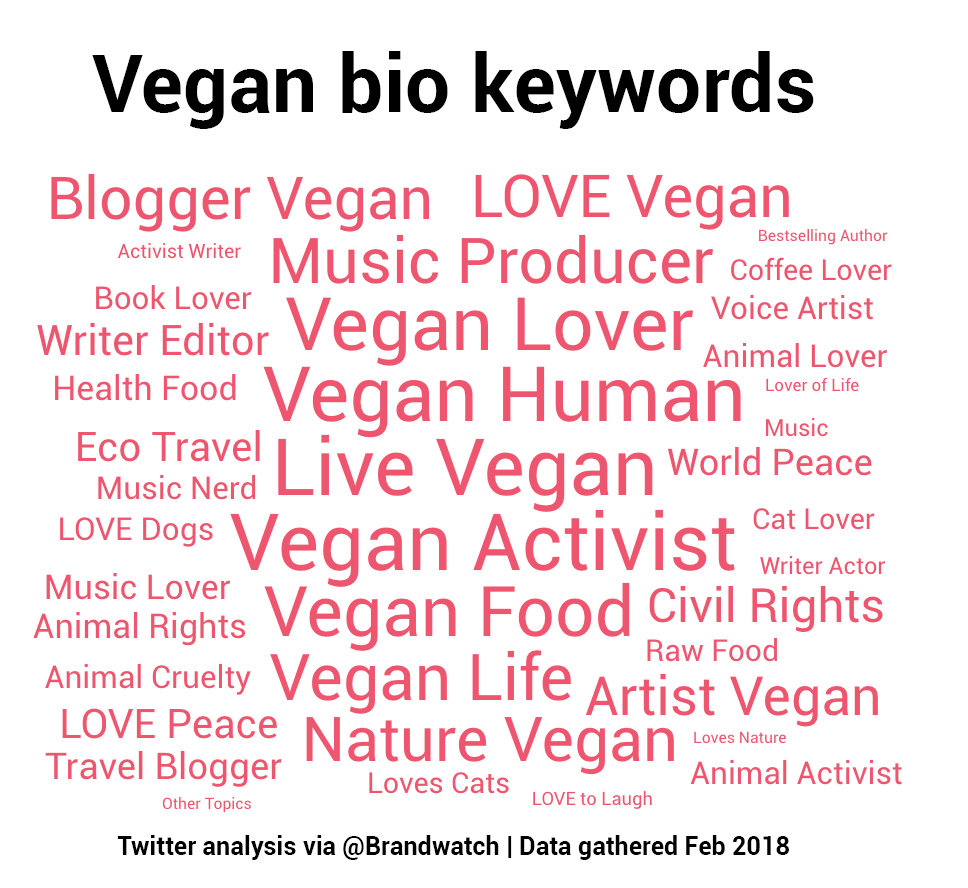 You are what you eat

For many, veganism is obviously more than a simple decision about what to eat on a given day. It’s a lifestyle, a set of principles, a stance – perhaps even part of their religious beliefs.

We used Brandwatch Audiences to find nearly 86,000 people on Twitter with the word “vegan” in their bio. Yup, it’s definitely popular. 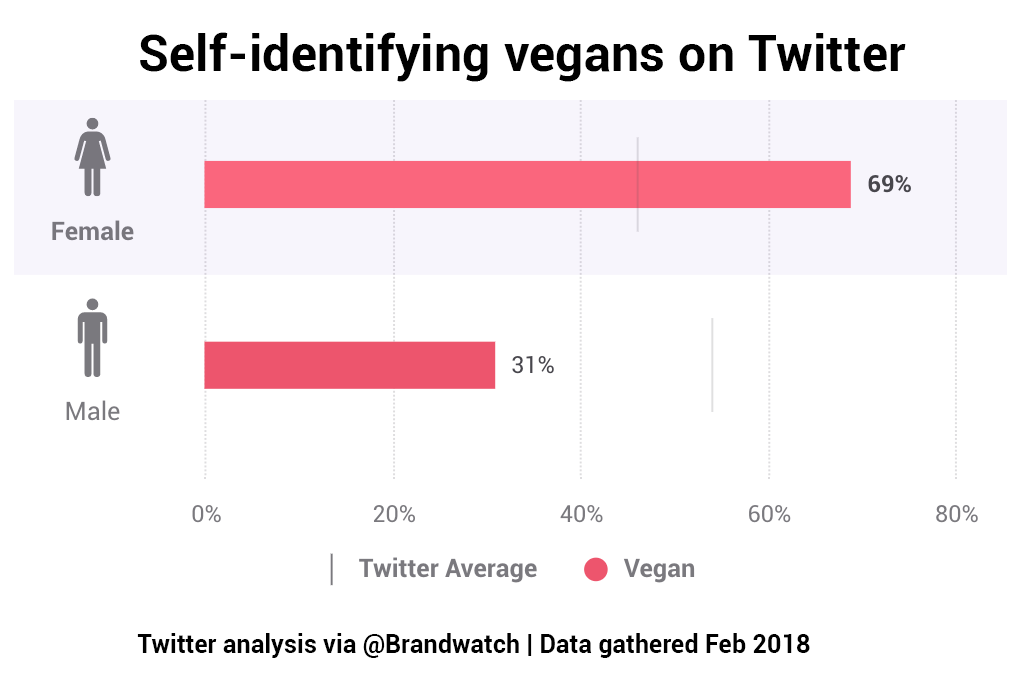 We also found that alongside the word “vegan” many of those in our database had animals, civil rights and the environment as core parts of their biography.

Looking at what they’ve been tweeting about recently, we found a whole lot of anti-animal cruelty stories as well as appeals for dogs who need homes.

The self-identifying vegans we found had more than double the number of female authors than male.

We also took a look at mentions of the hashtag #vegan on Instagram since the beginning of the year.

Browsing the posts, it was easy to see that on Instagram #vegan is almost just as much about lifestyle as it is about food. People are posting their “before and after” photos from when they began their new diet and exercise is also a key element, with gym selfies and mountain climbing photos tagged with #vegan.

Mentions of #Vegan peak on Mondays and around lunch time each day. 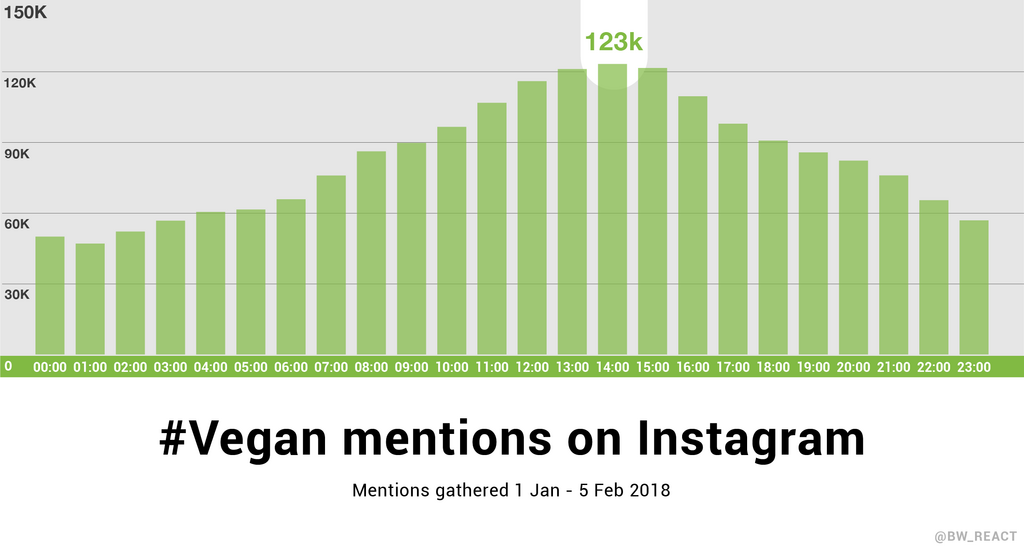 There are thousands of food blogs online but only a few are successful. We use Brandwatch Audiences to find the cream of the influential food bloggers crop.

Similarly to our Instagram mentions, mentions on the r/Vegan subreddit peaked on Mondays but tended to peak a little later in the day between lunch and dinner time.

The topics of conversation, however, are slightly different. Mentions of animals (including animal, animal rights etc.) have a far bigger share of voice compared to food, make-up and fitness on Reddit than on Instagram. 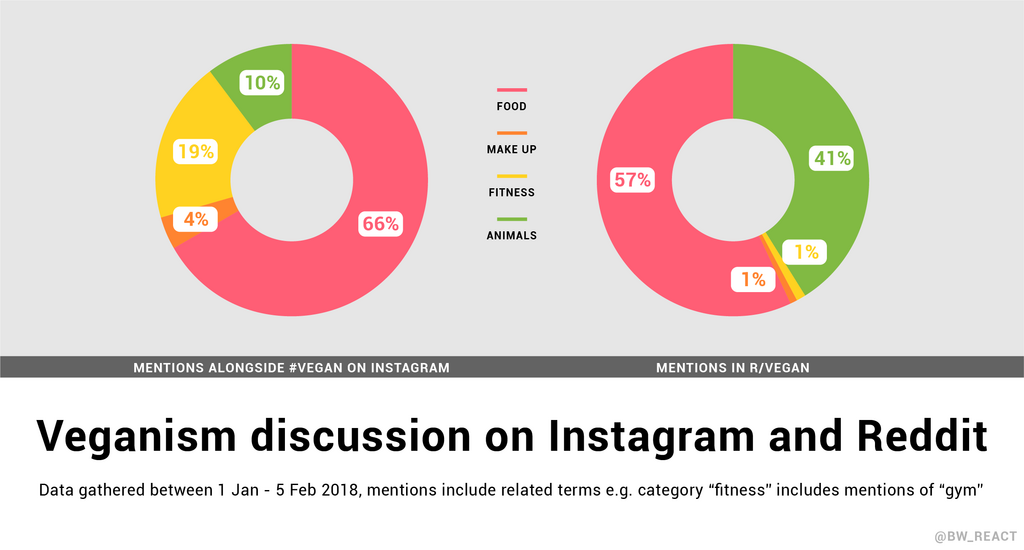 Meanwhile, fitness as a topic on r/vegan was not nearly as popular compared to in #vegan posts on Instagram.

Eating with your eyes

We thought we’d also look at the vegan conversation through the lens of one of everyone’s favorite brands – Ben & Jerry’s.

The makers of delicious ice cream have continued to add to their vegan range and are being paid back both in sales and thankful Twitter and Instagram posts containing the company logo.

Using Brandwatch Image Insights, we found 2.5k visual mentions of Ben & Jerry’s that also mentioned the word “vegan” in the text between 15 July 2017 and 6 February 2018. Here are some of them in our Instagram Image Wall: 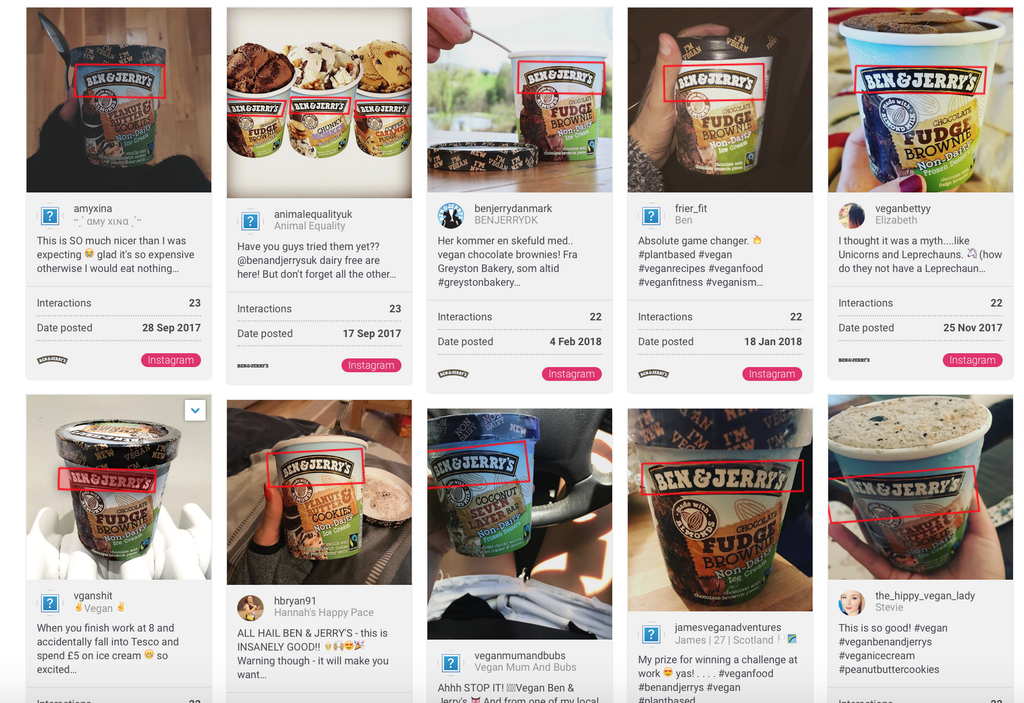 Throughout all the sources we looked at we found a willingness for vegans to discuss the brands they are in to, creating big opportunities for the food and beverage industry to learn more about this growing customer base and potentially get involved.

A simple search for “Brand*” in r/Vegan came back with a whole bunch of companies and products being discussed by the community there.

A scroll through the mentions will reveal reviews, opinions and stories about the brands that community managers and consumer analysts alike ought to be aware of – especially if they’re negative.

That’s a lot of vegan data on your plate

So what can we learn from this whistle-stop tour of online vegan communities and communication?

We should point out that we’ve only touched the surface here both on insights and platforms – you don’t need us to tell you how many places small communities can grow on the internet, from groups surrounding particular accounts on big platforms like Twitter to the harder to find, more niche blogs. Either way, insights from both are accessible with Brandwatch Analytics.

The first thing I’ve found surprising from my brief dive into vegan conversation is the amount of brand and product related conversation I found. You don’t need to be a vegan to realise that options both in stores and restaurants can be limited, which can present problems that online communities come together to discuss. Comparing thoughts on products is just part of that conversation.

Secondly, veganism is so much more of a lifestyle thing than I first imagined. I wouldn’t consider my own vegitarianism as central to my identity, but the number of health and other topics that are related to veganism – particularly on Instagram, but also in Twitter bios – opened my eyes to how others frame their dietary habits.

Finally, there’s so much that community managers in the food and beverage industry can get involve in here. There are opportunities to listen out for gaps in the market in certain areas or product types, enlist the help of vegan influencers, examine the problems vegans face in order to help create better experiences for them in restaurants or stores and learn what content does well in which online platforms and arenas. It’s all there in the data.