Podcast Audiences: Why Are Women Such Big Fans of True Crime Podcasts?

In which the Brandwatch React team gets addicted to grisly murder podcasts and then decides to do some data analysis around it to justify listening to more.

True crime “entertainment” is having its biggest renaissance since people used to go and watch petty criminals get beheaded in the village square while they threw cabbages around.

TV shows that pick apart the failings of the justice system and give viewers access to gory crime scene imagery are seeing incredible viewer numbers – if you haven’t watched Evil Genius yet where have you been?

And they’re being accompanied by podcasts that, unhindered by production costs and running times, go into the grisly details of some of history’s worst crimes. What’s your favorite murder?

Who’s consuming all this criminal content and driving demand for more? It’s women.

In this blog post we’ll delve into the world of true crime podcast audiences and try to find out why.

According to stats gathered in 2017, 56% of podcast listeners are male. Reading that I’d assume that, unless there was something about the podcast that obviously appealed to men or women, most podcasts would have slightly more male than female listeners.

That was not what I found when I began looking into the true crime genre.

I crowd sourced a list of popular true crime podcasts with various formats (some focus on just one case, others have a different case in each episode) and used Brandwatch Audiences to examine their Twitter accounts and see what the breakdown of male/female followers they had. Here are the results: 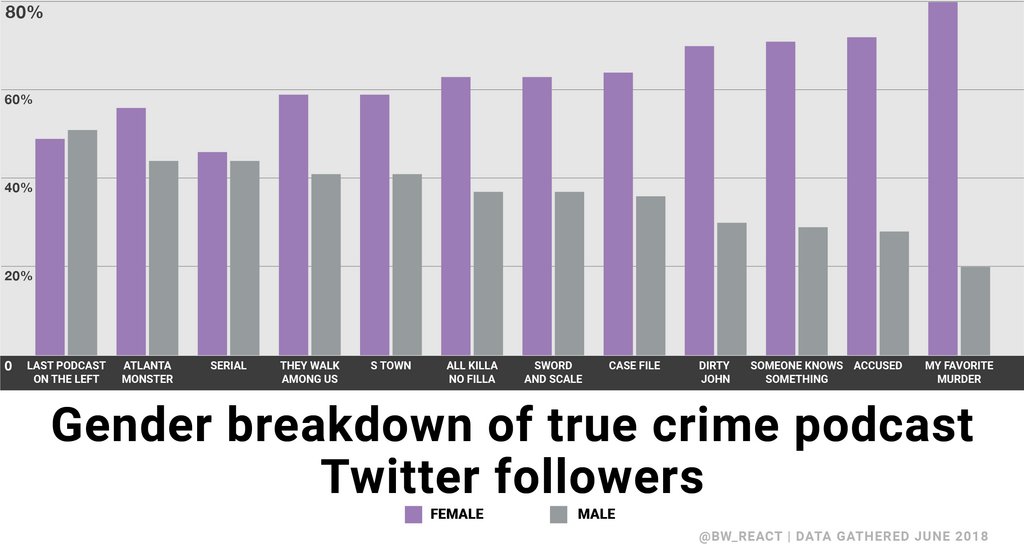 The only true crime podcast we found in this genre that had more than 50% of it’s followers categorised as male was Last Podcast on the Left (49% female, 51% male).

The rest, particularly the four on the right, had a much larger female following.

My Favorite Murder, which is my current favorite podcast, had the highest % of female followers, hitting 80%.

Given the massive gap, we were super keen to explore why women seem so much more keen on true crime podcasts than men.

There are a number of theories for this.

Listening from a safe distance: Kind of like how people enjoy horror movies because you’re watching them from a safe distance, true crime could offer a similar form of entertainment. That doesn’t necessarily explain why women are the primary audience, though. Amanda Vicary, assistant professor of psychology at Illinois Wesleyan University, told Business Insider “One of the reasons women may enjoy crime books and television shows more than men is because women fear being crime victims a lot more than men do.”

Getting tips for staying safe: Listening to these podcasts and consuming true crime content could also be considered as doing homework on staying safe, which may be true. That said, listening to the details of horrific murders and attacks may not be great for your anxiety levels. Vicary said: “They fear being a victim of a crime, so they may subconsciously turn to crime books or television shows to learn ways to prevent being a victim. This in turn exposes them to even more crime, perhaps increasing their worry even more.”

Hosts, topics and formats: When I saw how big the gap was between male and female followers when it came to the podcasts we studied, I tried to see if there were any patterns. While the two podcasts with the highest female followings are hosted by women, the gender of the hosts doesn’t seem to have much affect on the other podcasts we studied. Dirty John is hosted by a guy and has one of the highest female followings. There didn’t seem to be a pattern between podcasts that focused on one case or those that changed cases in each episode. Perhaps some further analysis could be done on the types of crimes discussed, the gender of the victims discussed or the general tone of the hosts and how that affects male and female listenership.

Something to remember here is that we’re looking at Twitter followers and haven’t looked at official listening data. So while our data gives hints as to how listeners are split, what we’re actually looking at is who has actively sought out these podcasts on social media and been interested enough to follow them.

In some ways, this is actually more interesting. The community aspect, which requires active audience participation (as opposed to silent, passive listening) is where podcasts can really thrive. Podcasting, as something that you tend to do alone perhaps while commuting or doing chores, creates what can feel like a personal relationship between host and reader. On social media, people can interact with the hosts and offer feedback on the show as well as enjoy and discuss related issues with like minded fans.

The My Favorite Murder Facebook page, which welcomes “murderinos” to chat about their own favorite murders, helped the podcast build a loyal, engaged following that’s growing and growing. At the time of writing, there are 214k members.

Seeing that female Twitter followings are so prominent for the podcasts we discussed, it seems clear that women are keen to come together to find out more and discuss true crime.

With friendships and spin off projects being created in these communities, this trend doesn’t seem to be going anywhere.

Are you a journalist looking to cover our data? Email [email protected]