Why Has Twitter Suddenly Gone Wild For P.F. Chang’s?

Recently we’ve seen an explosion of interest around long-standing Asian-themed restaurant P.F. Chang’s, leaving us all scratching our heads in wonder.

Chang’s Spicy Chicken is as spicy as ever and the Ginger Chicken with Broccoli is characteristically neglected. Let’s not even talk about the cold green tea noodles. It’s too early for that.

Nothing on the menu has changed, and there’s been no groundbreaking new marketing push or celebrity endorsement hitting the airwaves.

So, why did we find that conversations about the restaurant increased by 500% as last week began? 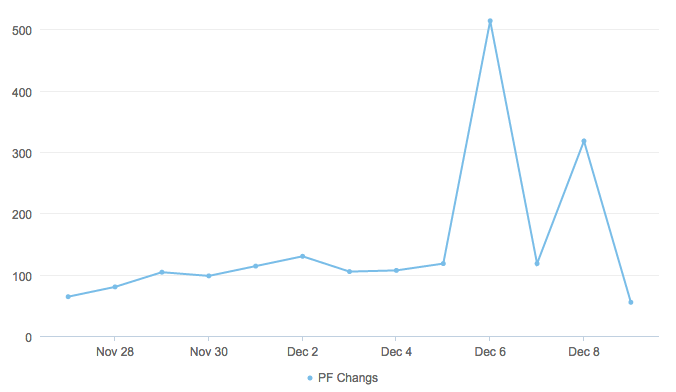 In the time before established social media rules were written  – 2007, to be precise  –  pretty much any Twitter handle was up for grabs. One-character handles disappeared in an instant and many brands saw their ideal @-names snapped up, leaving them no alternative but to cough up for the handles they really wanted further down the line.

(Though, most ‘prime social real estate’ is frozen, with users  –  like the coveted @JamesBond  –  leaving their accounts to die. A very real tragedy of our time.)

Back in 2007, the San Diego Chargers had the luxury of employing an ‘Online Initiatives Manager’, Joel Price, a role that would now be filled by bank of community managers and content strategists.

He managed to snag the @Chargers handle early, but still wasn’t quite sure what to do with it.

pf changs is so good

Now, the Chargers’ Twitter feed is a well-crafted stream of announcements and community interaction, but the new management have decided to leave up the distant echoes of the internet landscape in 2007.

Testing from my Palm 700p. I will see how it looks in the am. Really going to bed this time.

Every few months, a couple of people stumbled upon these strange and hilarious tweets, retweeting them in small circles. Even P.F. Chang’s themselves engaged in the fun in September this year.

But it wasn’t until last week that The Chang Effect really took hold.

After being surfaced by serial weird tweeter @Cryptoterra, 12,000 followers got a hint of the five-spiced weirdness, and the tweets snowballed into over a quarter of a million impressions and almost 5,000 retweets.

Joel now has his own personal twitter account and knows a little bit more about social media etiquette. It’s even netted him some free goodies:

BIG thanks for the complimentary lettuce wraps. @PFChangs definitely knows how to make our day better. #Chargers pic.twitter.com/flxTNuAMcf