Who tops the social media scientist ladder? We put Neil deGrasse Tyson against Bill Nye to find out.

Once again, it is time for another social presence showdown!

We’re taking a brief break from looking at brand rivalries and are now comparing two men who’ve together, managed to make science as consumable and available as a bottle of Coke (or Pepsi, if you prefer).

As public figures as well as researchers, Neil Tyson and Bill Nye both have dedicated themselves to communicating to the public scientific findings in fun, palatable ways.

As a result, both Tyson and Nye appreciate the importance of a powerful social presence. Both scientists have millions of followers on Facebook and Twitter, and both reward their followers, posting nearly daily on both platforms.

However, there can only be one winner…

BMW vs Mercedes: We analyze the share of voice to determine the current leader, considering various aspects of their social presence.

The Science Guy regularly utilizes the freedom that Facebook provides as a platform by sharing 140+ character statuses and longer, more informative, videos.

There, Tyson is infamous for his often critical and always humorous analyses of scientific references in pop culture, which has garnered him nearly twice the Twitter followers as Nye (5.16M and 2.9M, respectively). 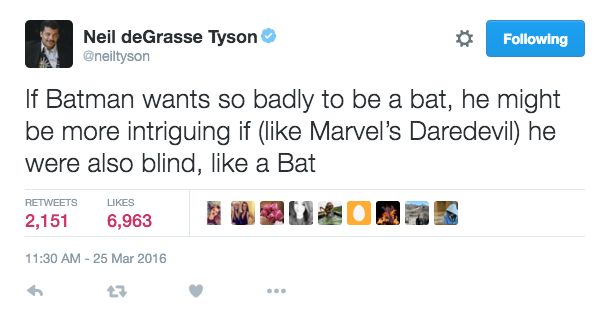 When it comes to which scientist brings all the nerds to the yard, it is a very close call. Nye’s visual presence on Facebook gives Tyson’s sarcastic Twitter persona a run for its money.

For a tie-breaking analysis, we looked at how often each scientist is mentioned by their audiences on all online platforms. 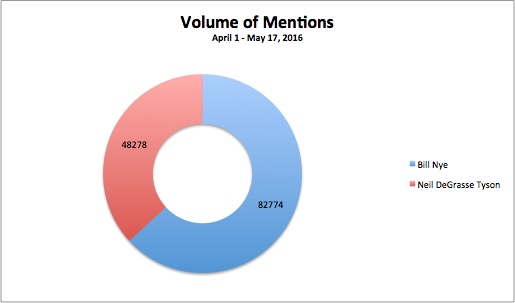 When it comes to driving conversation, both gentleman get tens of thousands people chatting each month. However, Bill Nye managed to collect over 80,000 mentions between April 1 and May 17, 2016.

Combining his command of Facebook and his commanding share of the overall online conversations, the first round goes to Bill Nye.

Both scientists work in and are from the United States, so understandably, individuals in North America dominate total mentions for both Nye and Tyson.

However, as both gentlemen aim to share unbound scientific curiosity, having the ability engaging people outside of North America and the West is a very arresting benchmark. 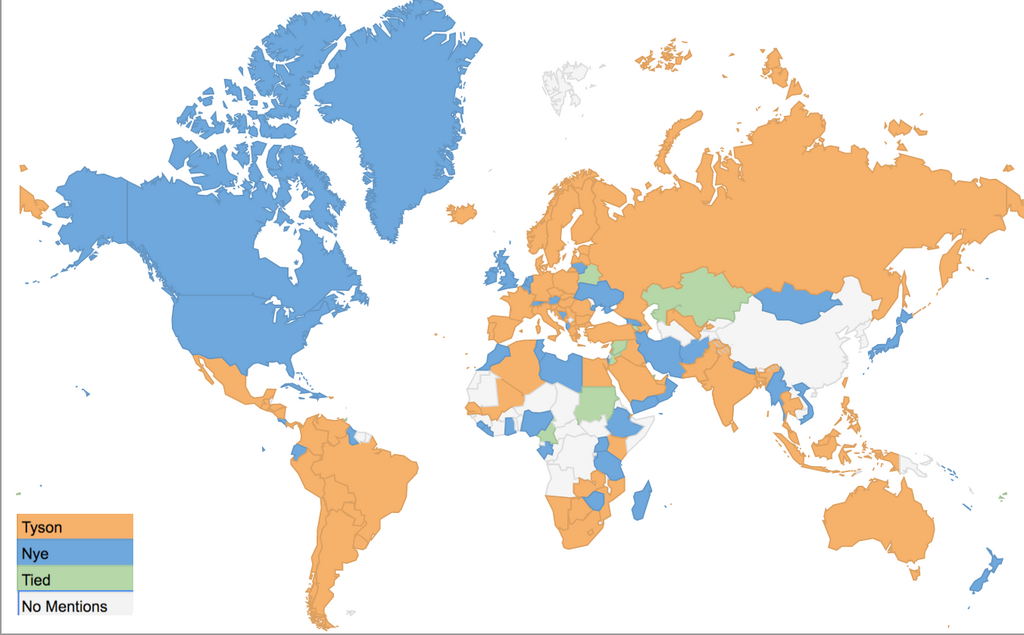 Our analysis shows that Nye shines in most of North America, but Tyson’s enticing a substantial portion of South America, Asia, Australia and Europe.

When excluding North American mentions, Tyson was talked about nearly 7,400 times between April 1 and May 17, compared to Nye’s 6,900 times.

This capacity to reach thousands of people outside of the North America is an impressive and important feat for a science communicator, which is why Neil deGrasse Tyson wins this round.

Battle of the broadcasts

As two of the most famous public science educators, both Nye and Tyson are well known for their science broadcasts.

Nye rose to fame in the context of his PBS science program, Bill Nye The Science Guy, which ran for five years and just last year became available for streaming on Netflix.

Up against the Science Guy, Tyson has two broadcasts under his belt.

Tyson is the creator of an hour-long weekly podcast called Startalk that’s been running since 2009.

In addition, Tyson famously hosted the 2014 documentary series, Cosmos: A Spacetime Odyssey, a reboot of the 1980’s series hosted by Carl Sagan, an idol and instructor of both Tyson and Nye.

Cosmos episodes are currently available for streaming on Fox.com, renting on Netflix DVDs, and for purchase on Amazon Video. 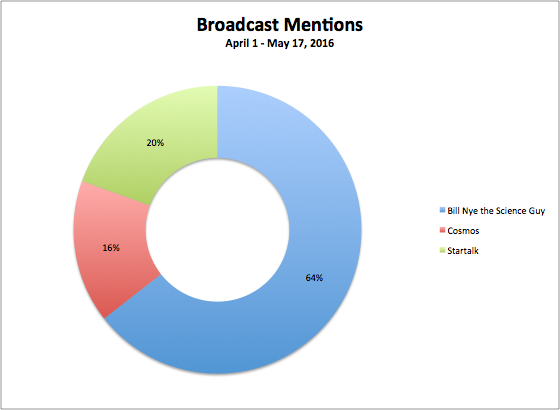 Even with Tyson’s advantage of having two unique broadcasts, one of which still airs new shows, veteran science broadcaster Bill Nye takes this round with his show scooping up nearly two thirds of the total mentions of science programming.

When it comes to what shows get people talking on social, you don’t want to mess with the Science Guy, himself.

Since both Nye and Tyson are unofficial Earth-advocates, It’s not surprising that discussion surrounding the scientists spiked on April 22, International Earth Day.

Both scientists shared special Earth Day posts on Twitter and Facebook, and our analysis of that day on social found that they accumulated over 13,000 mentions between them. 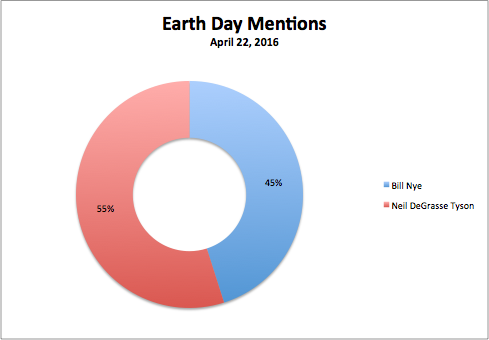 Tyson edged out Nye in volume of mentions, collecting 55% of all mentions of either of them on this day.

Tyson posted to Facebook and Twitter five times more than Nye did on Earth Day, sharing interesting Earth facts and provoking people to think about their planet in the greater context of the Universe.

Additionally, Tyson’s snarky criticism of Earth Day below was more popular than all of Nye’s more subdued posts, retweeted almost 20,000 times since April 22.

Odd that #EarthDay exists as a day at all. Instead, maybe it should be extended to the whole year, and then repeated annually

When considering both the quantity and the quality of Earth Day posts, this round has to go to Neil deGrasse Tyson.

The results are in…

It’s important to acknowledge Nye and Tyson for the awesome work they both do.

A large part of any scientist’s job is to contextualize their work in and convince the scientific community to care about what they do.

Pop scientists take on the often unrecognized goal of contextualizing not only their work, but the work of many scientists throughout all of history.

These scientists aim to convince mostly non-scientists to care about and better understand the role of science as a whole, no easy task.

In these ways, Bill Nye and Neil deGrasse Tyson have both had huge impacts on scientific understanding and curiosity. Their commitment to using social media and every other platform afforded to them to reach people of all ages has undoubtedly inspired countless individuals all across the world.

They sure as hell inspired me.

And yet, we must crown someone.

For this showdown of the science educators, Bill Nye is our winner, by a hair. 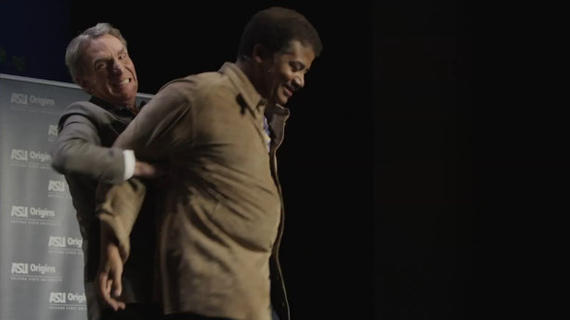 Nye has accumulated more Facebook likes, drives more conversation on social as a whole, and his show is still generating buzz from people of all ages, over a decade after the last episode aired.

Far from unanimous, Mr. Tyson put up a great fight throughout our analyses. His Twitter presence is very strong, his audience is slightly more globally diverse than Nye’s, and his unique wit and sarcasm is always a hit on social media.

If you have any questions about this analysis or suggestions for the next Social Presence Showdown, please Tweet @Brandwatch and let us know!