Here’s all the social data from the biggest fashion event in the world.

Vogue’s annual fundraising gala is renowned for its high fashion, and this year’s conversation was the biggest in years. We followed the ‘gilded glamor’-themed event to see who fans thought stole the show.

Read on to discover the biggest talking points that surfaced across social media conversations during the Met Gala 2022.

Note on methodology: All the data mentioned here was gathered from 6pm EST to roughly 9pm EST (the time frame of the Met Gala 2022 event).

Conversation on social media boomed during the Met Gala, with this year's event generating far more mentions than its predecessors of recent years. The influence of the Met Gala is undeniable, and both A-list celebrities and high-end designer brands are making the most of it. 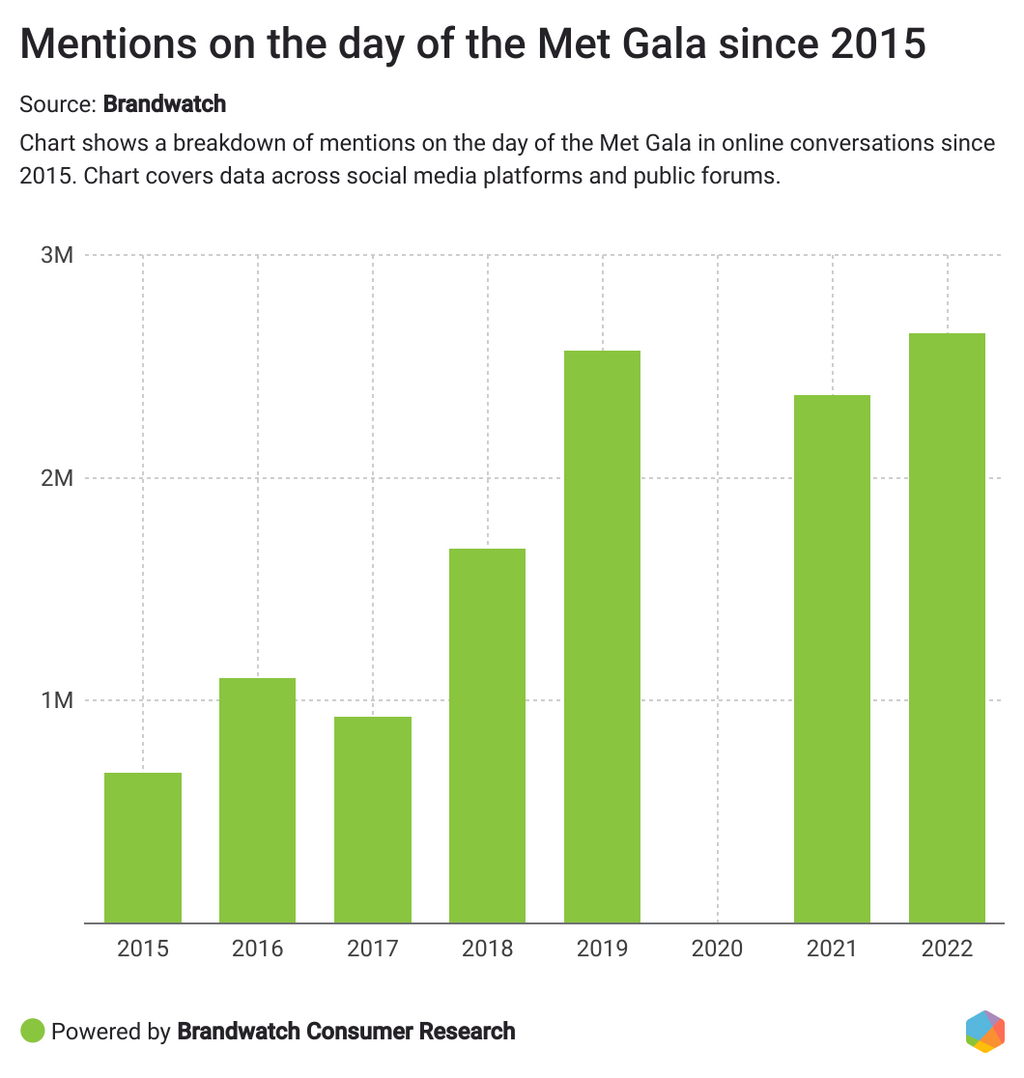 The #MetGala hashtag received more than 9.4 billion impressions during the pink carpet broadcast this year. Equally, #MetGala2022 accumulated 1.3 billion impressions of its own. These impressive numbers confirm the remarkable influence the Gala has across social media platforms, as well as in mainstream media.

When looking at emotion-categorized mentions, the emotion that was most prevalent within the Met Gala conversation was joy. More than 162,000 mentions contained speech recognized as joyful, dominating 49% of these conversations. The Met Gala is always well-received, as fans express their happiness at the latest celebrity looks. 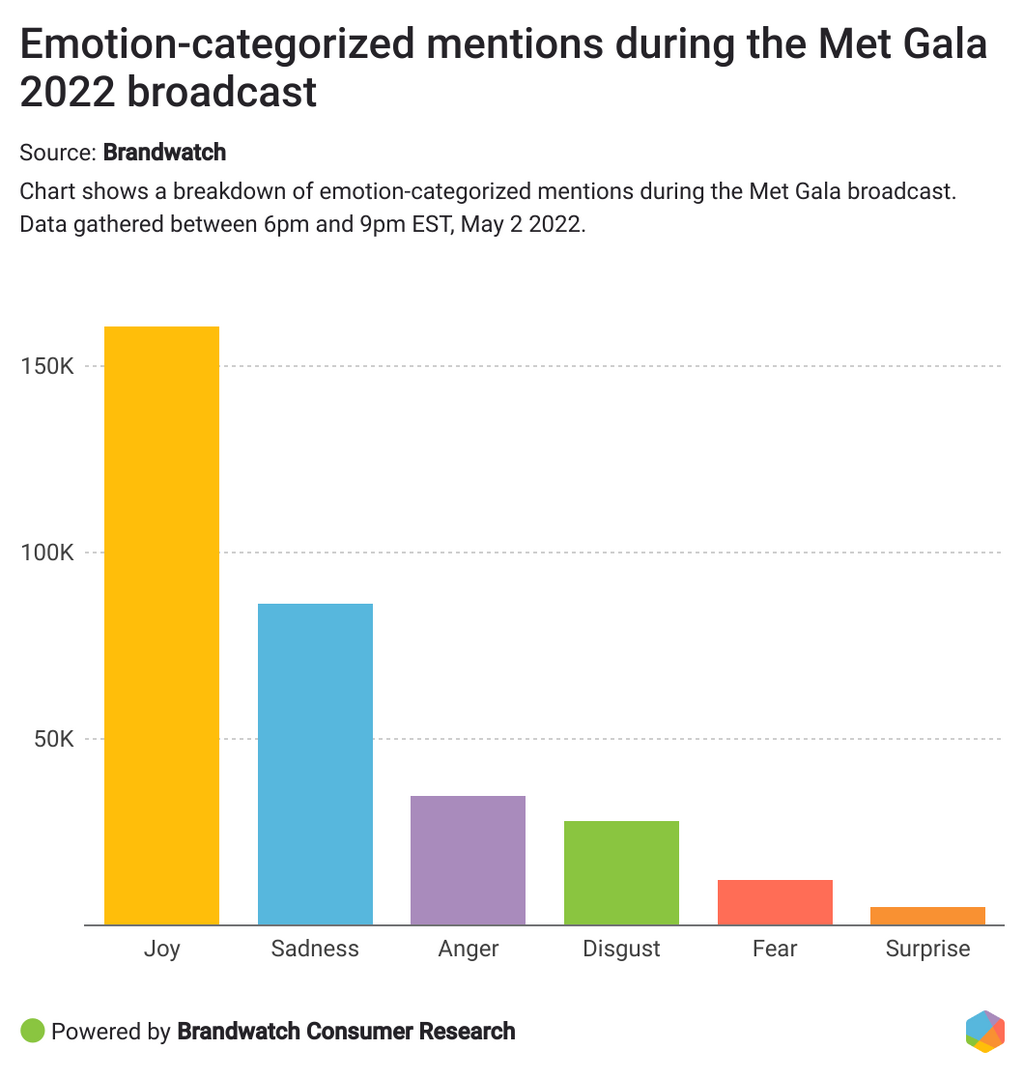 Sadness had the second highest prevalence, with more than 87,000 mentions, stealing 26% of the conversation. These mentions mostly consist of the ever-present section of the internet that insists celebrities don’t closely follow the theme of the Gala with their fashion choices.

this met gala theme was the easiest to follow how did people get it wrong pic.twitter.com/pU23IV8NKC

Blake Lively received the most mentions of this year’s hosts within the Met Gala conversation. During the pink carpet, she received more than 134,000 mentions. Blake’s dress garnered plenty of attention when, as a tribute to the Statue of Liberty, she made an outfit adjustment mid-carpet.

The host with the second largest number of mentions was Blake’s husband, Ryan Reynolds, who accumulated over 36,000 mentions of his own. While impressive numbers, these were miles behind Blake’s. This proves that, if celebrities want to cause shockwaves on social at the Met Gala, your outfit is everything.

The other two hosts, Lin-Manuel Miranda and Regina King, only accumulated 2,400 and 1,700 mentions respectively. To put it another way, Blake Lively had 77% of all host mentions within the Met Gala conversation.

The most talked-about celebs

The celebrity guest-list is what makes the Met Gala so riveting for viewers. Fans take to social media in waves to discuss their favorite, and least favorite, outfits and styles.

This year, Shawn Mendes took the top spot in most-mentioned during the broadcast. He saw a peak in conversation when he walked the carpet, as fans were impressed with his completely upcycled Tommy Hilfiger outfit.

i’m so proud to have attended the Met Gala with @TommyHilfiger this year. walked the carpet in a beautiful up-cycled look ✨✨@GettyVIP pic.twitter.com/sgVET0mjzo

Billie Eilish was close behind, with nearly 26,000 mentions during the Gala. Her outfit, a regal look by Gucci, was also made entirely of upcycled materials. Her sustainable style caused a roar on social media.

Looking at the sentiment of the conversation surrounding celebs, Emma Stone’s look was seemingly the most disappointing for fans. Many people referred back to her playing the role of the devilishly fashionable Cruella, in the film of the same name. A huge 40% of Emma’s sentiment-categorized mentions were negative, as many fans hoped her look for the Gala would be better.

you are gonna tell me emma stone played fashionista cruella and went to the met like this ? nah get your money back. #metgala pic.twitter.com/rQoOpddnCK

Celebs didn’t need to be present to be talked about. There were some popular celebrity absences at this year’s Gala, which sparked many conversations. Among the absent were Rihanna and Zendaya, two celebrities who have created their own narratives within the Met Gala conversation in the past.

Rihanna, who was unable to attend due to her pregnancy, was honored by the Met via a statue in the gallery. Equally, Zendeya’s absence was noticed by her loyal fanbase. Zendeya’s iconic outfits from previous years set her apart from the rest, and her presence is always a noteworthy moment at the Gala.

no harry no taylor no ariana no zendaya no rihanna no beyoncé no doja. i’m heartbroken #MetGala pic.twitter.com/q2HBAK90JF

Behind the celebrities, designers are a huge talking point during the Met Gala. After all, they’re the ones dressing the A-listers. These events are an opportunity for high-end fashion brands to generate millions of online impressions with their outfits, so the stakes are high.

This year, Versace accounted for 44% of all designer mentions within the Met Gala conversation. With 24,000 mentions, they were four times more spoken about than any other designer.

The two largest mention spikes in the Versace conversation were driven by two celebs: Olivia Rodrigo and Cardi B. Both of these celebrities are hot at the moment, with Olivia winning big at the Grammys, and the recent announcement of Cardi B’s appointment as creative director of Playboy. As a result, Versace scored high for impressions at this year’s Gala. This shows that designers can benefit greatly from the celebs they choose to style. 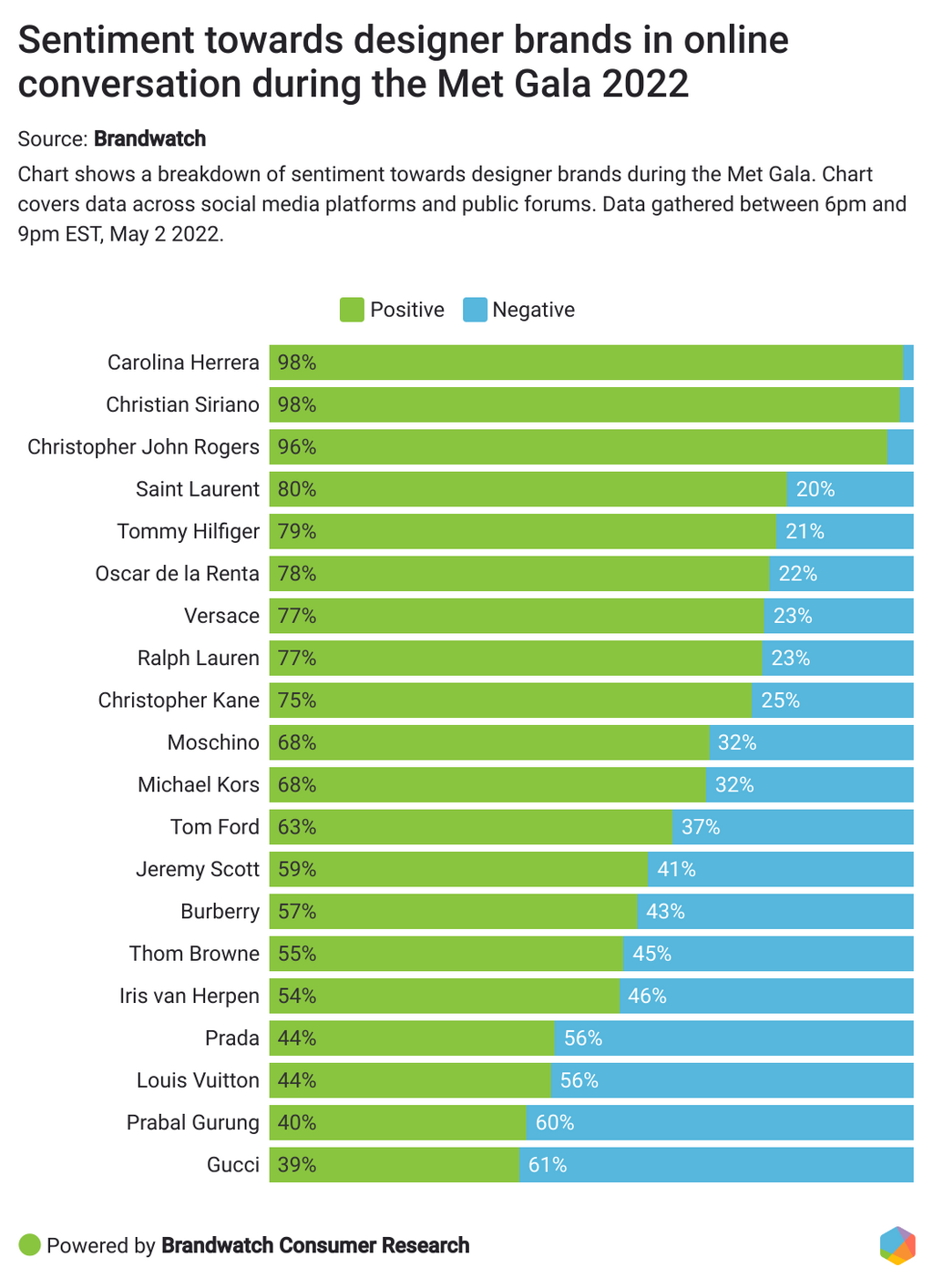 The Met Gala has grown exceptionally since its conception almost 75 years ago, and conversation on social media is only growing. For designer brands, the peaks in the conversations surrounding A-listers are second-to-none. Fans love to watch the highs and lows of the Met Gala, and jumping into the conversation in the right way can be favorable for generating hype about your brand. Plus, the ability to track mentions on social media can be invaluable for brands to discover how to fit into the bustling conversation.