Black Friday happens on the Friday after Thanksgiving in the United States, and it’s renowned as being the busiest shopping day of the year. This year, online sales topped a record $9.12 billion, with millions searching for the best deals.

In this blog, we dive into the history of Black Friday to attempt to predict the future of this consumerist holiday. Are customers fed up with soaring prices, with the cost of living crisis impacting purchasing power? Or is the opposite happening, consumers being more money conscious and saving their Christmas shopping for when the sales hit?

Black Friday began in the US. Historically, it became an unwritten rule that stores wouldn’t begin advertising for Christmas before Thanksgiving was over. Thus, the day after Thanksgiving became the day that the shopping season officially started.

The 2000s saw a surge in the popularity of Black Friday. At this point, it was all physical – e-commerce hadn’t yet taken off. Although, in 2005, the term ‘Cyber Monday’ was coined by the National Retail Federation, as retailers began to notice a surge in online traffic following the Thanksgiving weekend.

Towards the end of the 2000s, the crowds rushing to grab the limited Black Friday deals were getting violent. In 2008, a Walmart employee was even trampled to death in a stampede – showing just how intense Black Friday could get in stores.

Since 2010, online mentions of Black Friday have shown an interesting trend. As e-commerce took off and Black Friday grew into a digital phenomenon, interest grew online. More and more consumers were sharing their latest buys, and brands were using social media and digital advertising to share their discounts and deals.

On Black Friday in 2012, mentions peaked at over 1.5 million. Yet, since then, mentions have consistently dropped. The hype around Black Friday started to fall, and negative sentiment began to rise. When diving deeper into the data, we see a rise in the number of ‘angry’ mentions online from 2011 through 2016. This increase in negative sentiment might explain the fall in mentions that followed the peak in 2012. It looks like, as more people are developing negative opinions towards Black Friday, less people are getting involved. 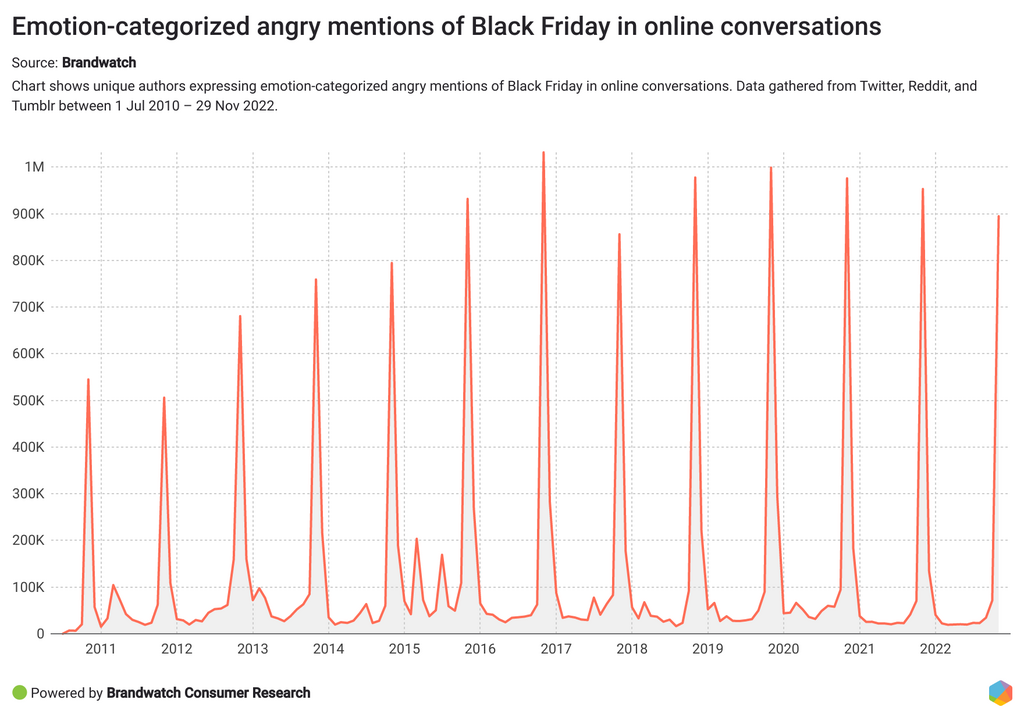 An increasing number of consumers began to share frustrations about the Black Friday frenzies. From a bad experience in stores to not getting great deals online, a negative cloud began plaguing the holiday.

Black Friday. The day you breathlessly bring something you’ve been waiting to buy to the online cart, only to see “excluded from sale.”

As well as frustration at the deals and discounts, another trend was growing: avoiding Black Friday altogether. Instead, many wanted to shun consumerism, opting to be more mindful of their spending habits.

In 2015, American retailer Recreational Equipment Inc (REI) decided to shut all 143 of its stores on Black Friday. The outdoor gear and sports retailer paid its entire staff to “opt outside” – instead of spending the day in stores, they were encouraged to literally go outdoors and enjoy nature. This altruistic campaign still runs to this day among many other brands.

Underneath a tweet by news outlet CNBC about REI’s closure, one Twitter user predicted that Black Friday would lose steam in the coming years. Interestingly, they were right.

COVID, inflation, and the fall of the Black Friday conversation

In 2020, the COVID-19 pandemic knocked the Black Friday conversation to its knees. A holiday that had already fallen from favor saw its lowest mention numbers since 2010. Yet, online spending was still up. This goes to show the value of digging deeper into these conversations, to discover why consumers value certain conversations over others.

Web purchases on Black Friday in 2020 surged nearly 22% to hit a new record, according to data from Adobe Analytics. Stores couldn’t operate in the usual way, so online shopping became the default during the pandemic.

A similar thing happened this year. Despite 2022 bringing painful inflation and a record-breaking cost of living increase, Black Friday remained strong. Spending was still high, although there wasn’t a large increase in purchases like there normally is. Online sales rose just 2.3% this year. Equally, the online conversation around the day didn’t see a significant increase.

Perhaps now, people are turning to Black Friday as a necessity. Consumers are holding off on their regular spending in the lead up to Black Friday’s impressive discounts, but now it’s because they’re more conscious of spending habits. Statista suggested that “the main motivating factor for people to shop on Black Friday may also be the reason it struggles this year: people’s desire to save money.”

In 2022, Black Friday seems to have lost its sparkle. Instead, it’s become a requirement during a cost of living crisis. With inflation at an all-time high and the rising cost of living impacting the globe, consumers are turning to discounts by obligation.

the cost of living crisis is hitting hard because even the black friday sales seem too expensive this year https://t.co/b5zGNtocB9

What’s next for Black Friday?

It’s difficult to predict how consumers will react to Black Friday next year. Yet, the subtle rise in unique authors discussing the sales since 2020 seems promising.

In the upcoming Christmas sales season, brands will have to tackle the sensitivities surrounding the cost of living crisis, inflation, and more. In a period where many are struggling, offering good discounts seems to be the only way to increase sales.