What can we learn about Clinton and Trump Supporters (or at least assumptions about them) by examining social data surrounding the vehicles they discuss?

Bumper Stickers. They are the window to the driver’s soul, or at the very least to their opinions on mean people and why they brake.

As we’ve all seen, they also offer an opportunity to show off where your stance on politics lies. This has become all the more apparent this (never ending) election cycle.

When examining bumper stickers, it can become fairly easy to operate on assumptions and apply them to all supporters of the candidates.

With those assumptions in mind, we wanted to see just how accurate they are, and whether or not all Clinton supporters drive Subarus (not necessarily) or all Trump supporters drive trucks (actually pretty accurate).

First, a note on methodology. In order to get panels of Clinton and Trump supporters, we used the Brandwatch Audiences tool to search for would-be voters. This search was limited to individuals in the United States with three possible hashtags for either candidate.

For Hillary Clinton supporters, we searched for #imwithher, #hillyes, and #Hillary2016. For supporters of Donald Trump, we looked for #trumptrain, #makeamericagreatagain, and #trump2016. In order to limit the audiences, we then created a random panel of 4,000 authors with between 50 and 50,000 followers.

To find out exactly what they drive, we searched across the general population for mentions in which drivers explicitly mentioned the brands or types of cars they drive. We wanted to look at a variety of car brands, so we compiled a list of 15 leading foreign and domestic brands and searched for personal pronouns used near the brand name (say, Toyota) and the brand’s products (Prius, Tacoma, etc).

Finally, to prevent a few viral mentions dominating the conversation, we excluded retweets at the query level. 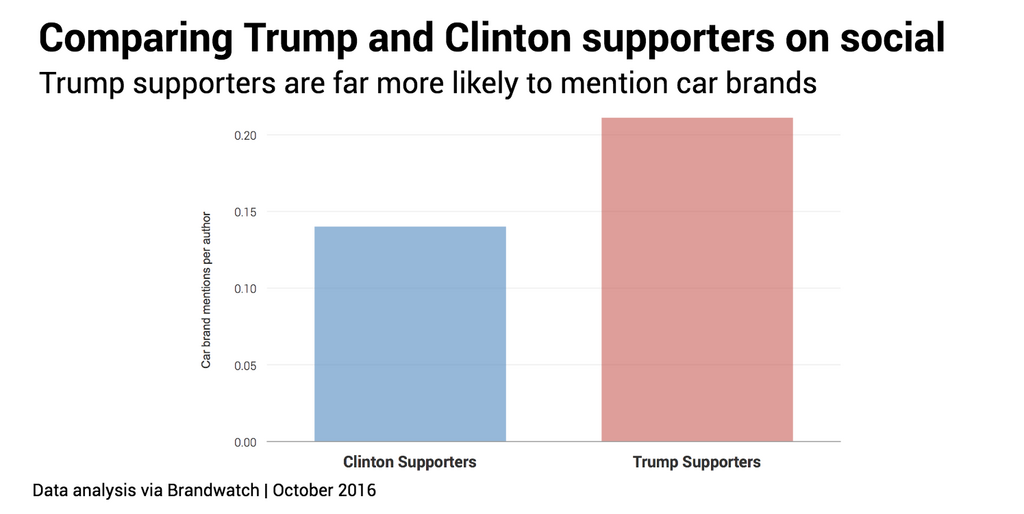 Trump supporters were also more likely to mention their favored candidate within the context of these car brands, suggesting a greater trend toward politicizing among the author panel. 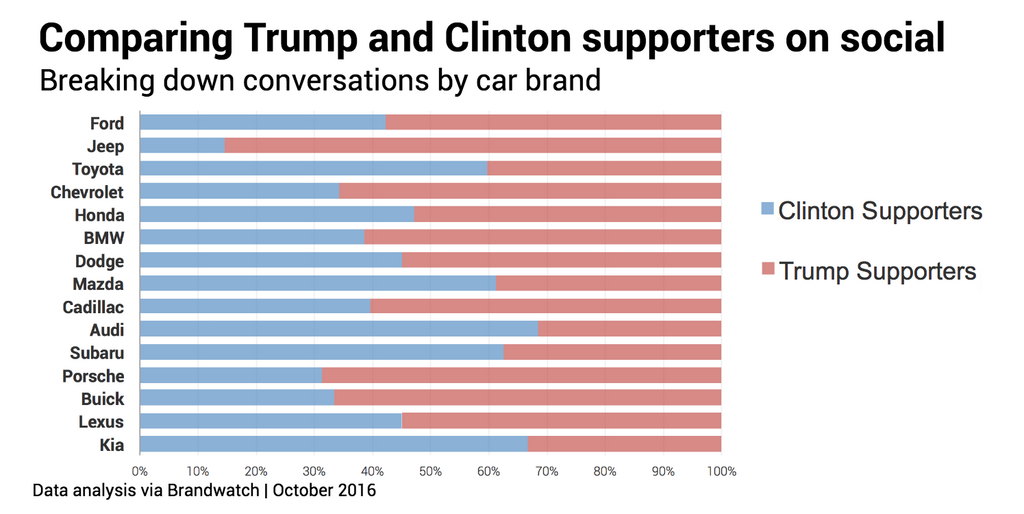 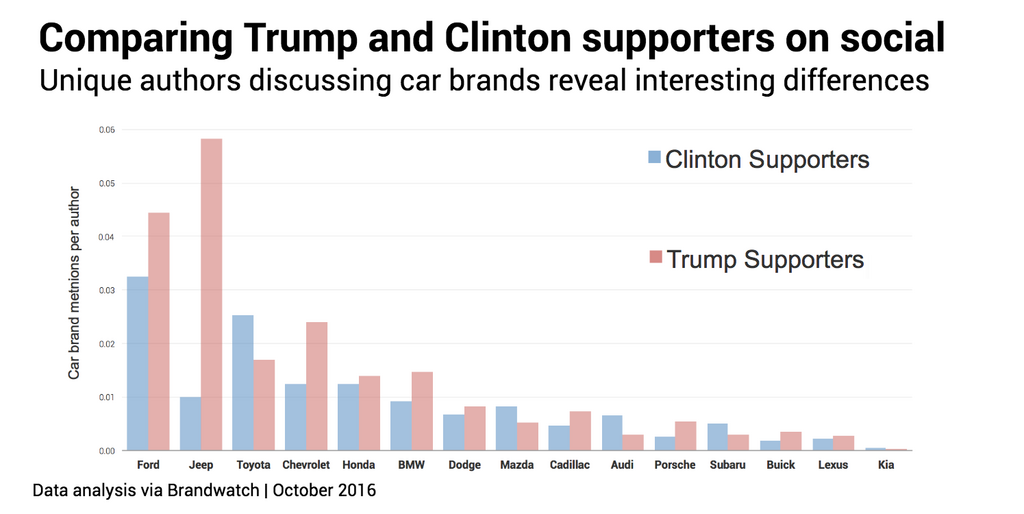 Taking a more top-down view, we also considered the brands as foreign and domestic, with six domestic and nine foreign brands.

Again, we considered unique authors and not mention volume for this chart, which shows that Trump supporters were more likely (7% of authors) to own American brands. Of the 4,000 Trump supporters, nearly 300 mentioned their American cars (Ford, Jeep, Cadillac, Chevrolet, Buick, and Dodge). Clinton supporters were more likely to mention their foreign brands (Toyota, BMW, Honda, Mazda, Audi, Porsche, Subaru, Lexus, or Kia). 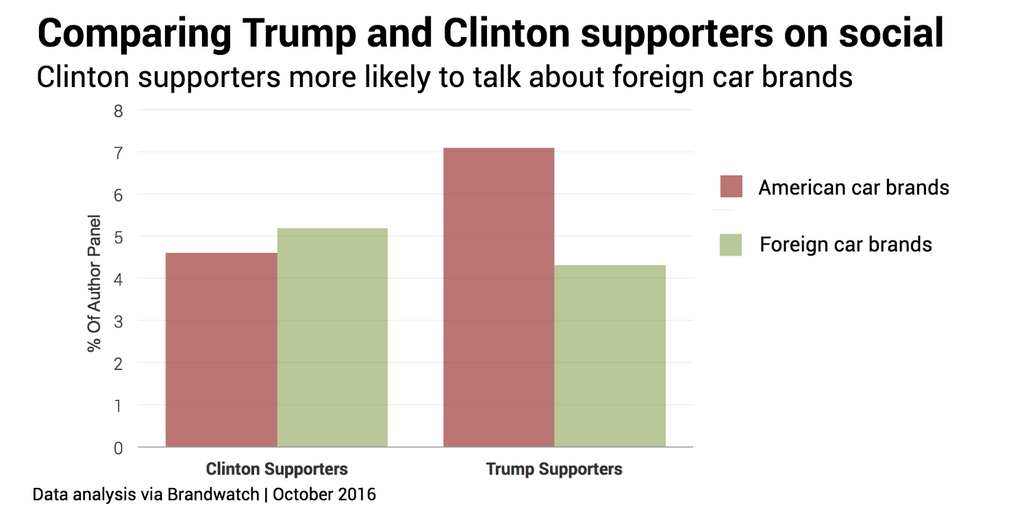 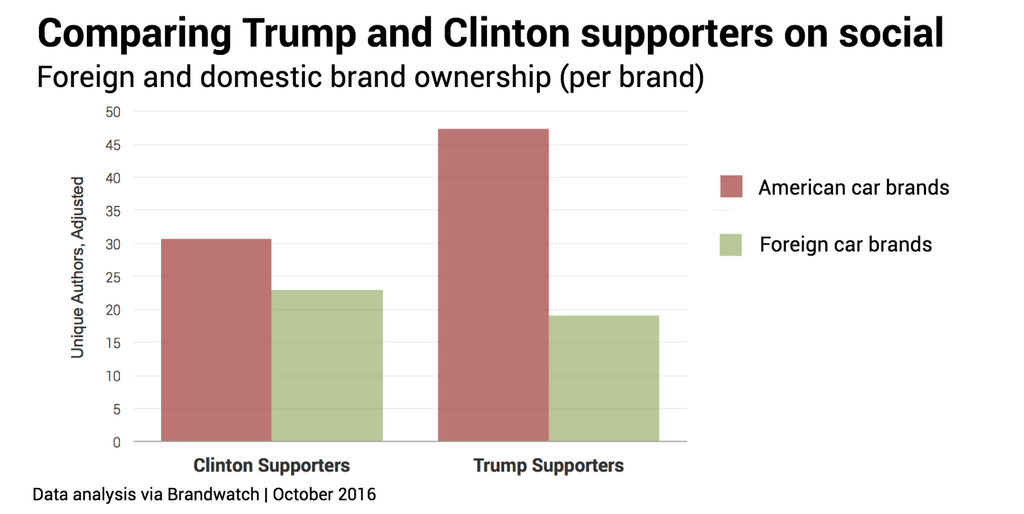 Finally, we wanted to consider the demographics of non-specific car ownership through the supporter lens. Using a similar methodology as the brand conversation discussed earlier, we searched for personal pronouns near the following: truck, minivan, SUV, or Hybrid.

Again, we found that Trump supporters were more likely to mention their vehicle type than Clinton supporters. However, these distribution totals were far lower than brand-specific mentions, with approximately .045 mentions per author in the Trump panel. 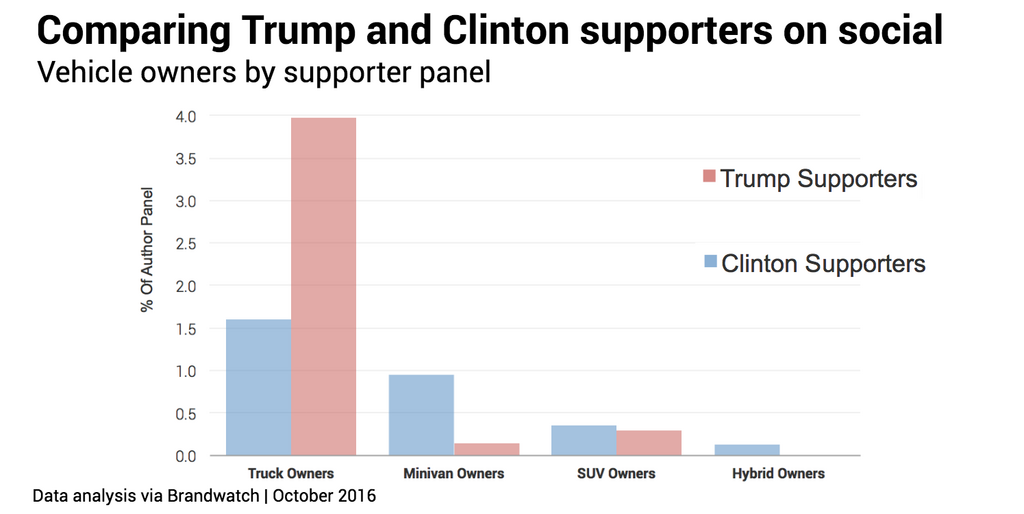 Using social data, we can see just how far our preconceived notions go, and where they fall short. To this end, the Audiences tool is especially effective, as it allows panels to be created and compared, moving beyond just bumper stickers and vague ideas of supporter stereotypes. Of course, it remains to be seen which bumper sticker will be the most obsolete in the coming years. We’ll revisit in 2020.