The Bolt Phenomenon: Four Reasons Why Usain’s a Natural Champion

Usain Bolt was born to live in the limelight. Performing in front of billions of fans seems to only improve his performance, It’s as if he was built to...

Using the Brandwatch Analytics tool we’ve taken a final look at the 2014 Commonwealth Games with a focus on the standout athlete from the games.

Usain Bolt was born to live in the limelight. Performing in front of billions of fans seems to only improve his performance, as if he’s built to create jaw-dropping moments.

He’s a maverick on and off the field and a world class athlete – Usain Bolt is most definitely one of a kind.

But can we measure the Bolt phenomenon?

Using Brandwatch Analytics we’ve compared Bolt’s online presence to a host of different metrics in order to give some tangible reasons as to why Bolt is seemingly a natural champion.

Maybe it’s his blasé attitude or his slight modesty about his greatness, but whatever it is Bolt is loved by millions around the world.

Here we’ve found how many positive mentions Bolt received compared to other popular athletes over the course of the games.

Even Tom Daley – with his host of young fans – doesn’t get close to Bolt. It must also be noted that these mentions are only taken from the UK – revealing that Bolt is more popular to the British then their most popular homegrown athletes combined.

2. He’s bigger than the brands

Bolt is not one to turn down an advertising deal, and why would he?

It doesn’t seem to affect his likeability, but it most definitely has a big effect on his bank balance, so it’s a win win situation for him.

With a 100m runner’s career limited to just a handful of years at the top, it’s no surprise that Bolt has cashed in on major deals with Gatorade, Hublot, Visa, Nissan, Soul Electronics and Puma – all earning him over $20 million a year.

His major sponsorship deal for the Commonwealth was with one of the major games sponsors: Virgin Media.

Virgin Media have spent millions on the sponsorship to latch on to his popularity. Yet Virgin Media haven’t seen any spike in terms of online mentions despite the huge conversation around Bolt. 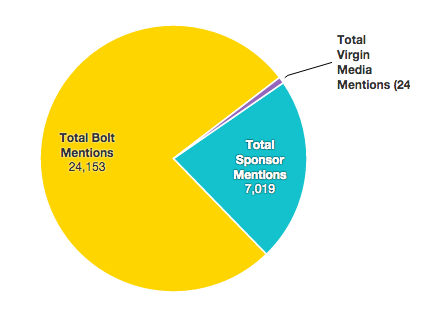 It’s fairly clear that Bolt hasn’t elevated Virgin Media’s online mentions – in fact, they were the least talked about sponsor during the games.

So what’s going on? Are brands not gaining as much as they should from Bolts sponsorship? Or are they not using Bolts image as well as they could?

I would suggest that brands are suffering from Bolt’s large amount of different sponsors; none of them seem to be standing out. Bolt isn’t recognized with Virgin Media the way Beckham is with Armani or 50 Cent is with Vitamin Water.

Exclusivity to a celebrity may just be as important as popularity or awareness of a celebrity.

Writing an article on Bolt is no chore, he almost always comes with a sound bite, a novelty side point and a brilliant picture.

As you can expect, news articles about the fastest man in the world don’t come in short supply – there are more articles on Bolt then Bradley Wiggins, Hannah Miley, Nicola Adams, and Tom Daley combined. 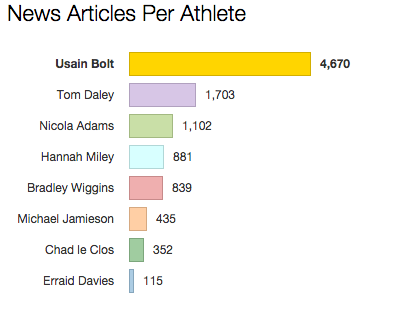 In fact, of all the people mentioning Bolt online, journalists came out on top with 22% of all mentions about the Jamaican.

People in creative industries came second and students third, showing that he sparks interest in a fairly broad group of people.

The recognition he gets from journalists obviously helps fuel Bolt’s popularity. With each article he becomes an idol for another boy or girl.

Actually, as well as kids, older men and women around the world idolize him by recreating his “high-power pose”.

According to a study by Columbia and Harvard business schools, this helps adults feel powerful and even experience an increase in testosterone!

4. He’s brought athletics into the limelight

How many of you have heard of Maurice Greene, Donovan Bailey or Valeriy Borov?

They are some of the previous winners of 100m sprint at the Olympics. These guys are obviously famous within the track and field sphere and also in their home country.

But they didn’t elevate the sport in the same way Bolt has. In fact, no runner can claim to have the same impact – apart from possibly Jessie Owens, who is recognized as “perhaps the greatest and most famous athlete in track and field history”.

During the Commonwealth Games, Usain Bolt has been mentioned more then the sport itself. 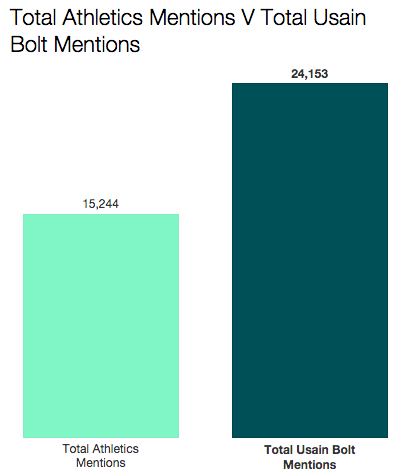 In fact, Bolt was mentioned directly in 12.4% of all conversation on athletics. Without him the sport would have arguably been spoken about 12.4% less.

To give some context, athletics in Britain grew by over 130,000 participants after Bolt’s performances at the 2012 London Olympics.

The Bolt phenomenon is elevating a sport by capturing the attention of billions.

All data used for this blog was gathered and analyzed by Brandwatch using the Brandwatch Analytics tool. Click here to sign up for a free demo.