Introducing a Faster and Smarter Way to Search

Searching trillions of public conversations online isn’t easy. Finding relevant insights can be like looking for a needle in a haystack. It’s time AI started doing the hard work for you. It’s time for Brandwatch Search.

With access to 1.4 trillion conversations, finding relevant data can be tough.

Searching for “Apple” won’t just bring back mentions of the company. It’ll also contain conversation around the fruit, the pie, the juice, and even The Beatles’ record company.

To remove all the irrelevant mentions, you have to spend hours writing detailed queries that exclude any irrelevant terms. 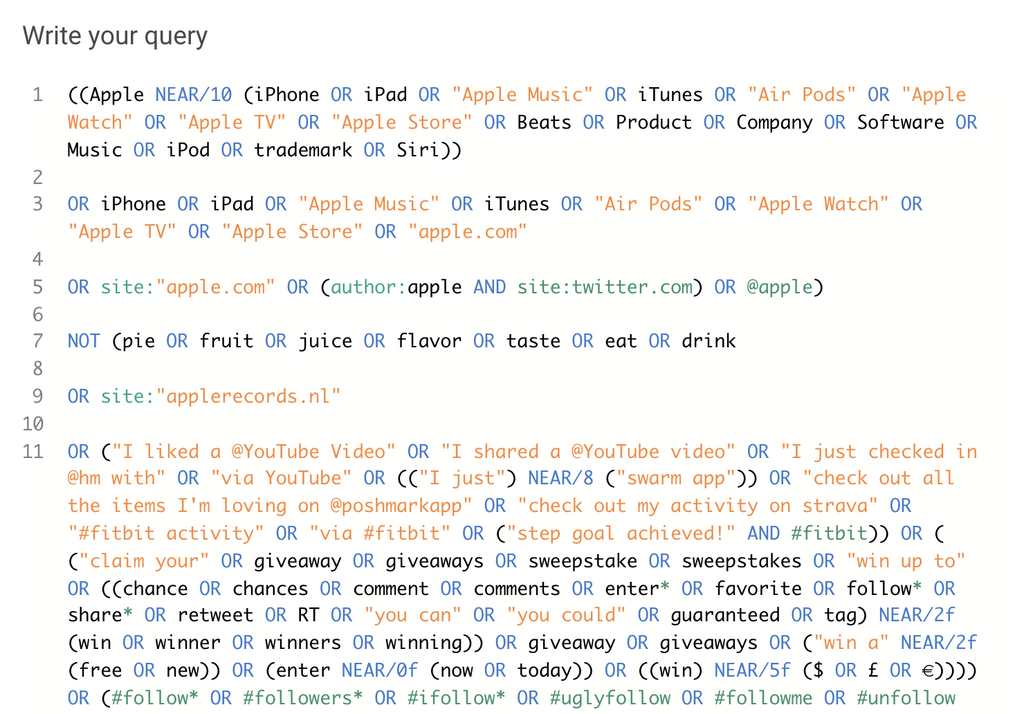 While this type of search can be very accurate, it’s not easy to write. Only experienced researchers can create something this in-depth, and many less-experienced users struggle.

Most conversation online contains bits of information that help us understand the context, even in tweets with less than 140 characters.

Me after investing $1 in Apple and Tesla pic.twitter.com/dF8Xcq5fHN

To create a search that would identify this as a post about the company Apple would be pretty tough. There’s no mention of the iPhone or App Store, no mention of Tim Cook or Steve Jobs. The image isn’t even related.

But there are some hints. The capitalized “A” in Apple, the mention alongside another major company (Tesla), and the word ‘investing’ all indicate to us humans that this is a mention of Apple the company, not the fruit.

We’ve now built a machine-learning algorithm to try and understand those same hints.

A smarter way to search

Using smart machine learning, we’ve been able to train an algorithm that analyzes conversation online for these types of hints. By referencing a corpus of conversation around terms like Apple, our algorithm can accurately predict that this tweet is for Apple the company rather than the fruit or record label.

This new technology makes searching simple. Rather than spending hours writing a detailed query, simply start typing and Brandwatch will automatically suggest what you’re looking for and do all that hard work for you.

The new age of search

Never before has the industry seen a search this simple and yet so powerful. It’s available to all Brandwatch customers at no extra cost and available for everyone to demo today.

We think our users will benefit from three huge advantages:

If you’d like to try Search out for yourself click here to request a demo. If you’re an existing client, access to Search is available now at no extra cost.