The Lush #SpyCops Campaign: Breaking Through the Backlash

Usually a massive backlash on Twitter and in the media means bad things are coming your way. But could a cosmetics company from the UK buck the trend?

On May 31st in-store displays went up in a number of Lush locations. “Police have crossed the line” printed on mocked-up police tape, along with talk of police spies, now sat front and center on British high streets.

A cosmetics company specialising in soap, bath bombs, and shampoo, they shocked many with a hard-hitting campaign around undercover cops.

Unsurprisingly many people were not happy, suggesting Lush was anti-police and branding the campaign disgraceful. Calls for a boycott went out as one after another social post claimed Lush had lost a customer for a life.

A few weeks later and the campaign ended on June 17th. How had Lush suffered after such a severe backlash on social media and in the press?

With an official launch of June 1st, Lush asked its stores to display material around their #SpyCops campaign (it was up to individual stores to decide if they wanted to be involved or not).

Centered around the scandal of police officers spying on activists up to the point of fathering children while undercover with a secret identity, the campaign sought to raise awareness around the issue and press the government to ensure the Undercover Police Inquiry did its job.

At least one store put up the material on the 31st. The backlash began immediately.

I am appalled by the message @LushLtd are promoting in their windows in relation to the police and the undercover work carried out pic.twitter.com/4m6ebdxAmG

The above is one of the earliest tweets commenting on the campaign, but with one like and just a couple of replies, it got minimal attention.

The latest "advertising" campaign by LUSH UK..... 🙄 You might now expect a 100% reduction in calls to the Police, given that they're displaying their contempt in their shop windows... pic.twitter.com/LGXCZ5o7BG

And this is where the backlash really kicked off. UK Cop Humour framed the campaign as anti-police while also calling on their followers to leave reviews on the Lush Facebook page. It wasn’t long until their rating dropped to 1 star.

Twitter users began to say they’d boycott Lush and by the end of the day nearly all mentions aimed at Lush’s Twitter account negatively referenced the campaign.

But it wasn’t until the following day that people really started to pay attention. 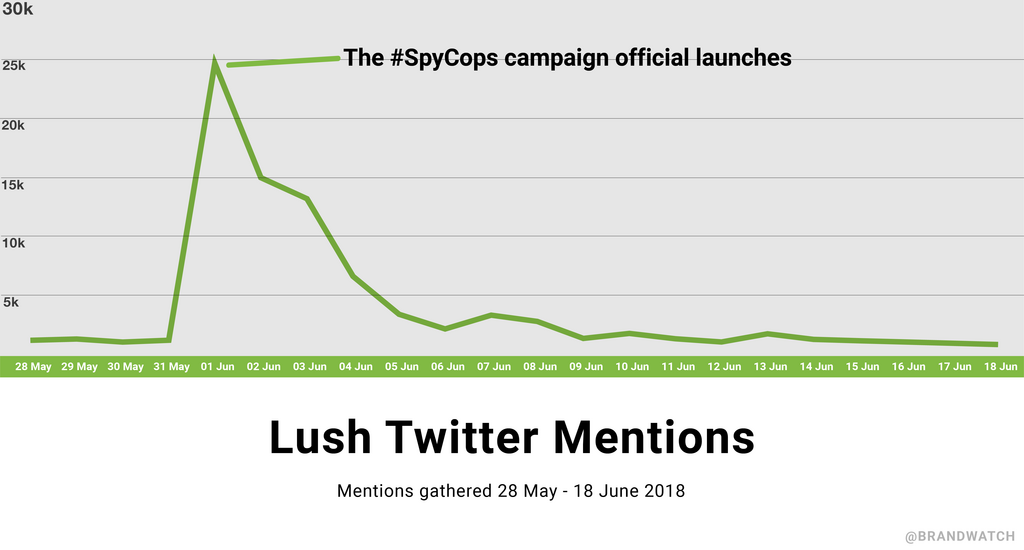 That spike is a jump of 2321% compared to the previous Friday. Lush had got Twitter’s attention. And when Twitter starts paying attention to something the media and politicians aren’t far behind.

The backlash to the campaign was picked up by the Daily Mail, Evening Standard, BBC, Guardian, Telegraph, and every other major newspaper. Industry publications picked it up too including Retail Week and PRWeek.

The latter sourced quotes from the world of PR with Andrew Bloch, founder of Frank, talking about a “mass consumer backlash” claiming “the damage has already been done.”

The Home Secretary, Savid Javid, even waded in with a tweet criticising the campaign. Lush was getting it from all sides.

There was even an boycott hashtag in use: #FlushLush.

Surely they were doomed.

Of course, we know that’s not the case. 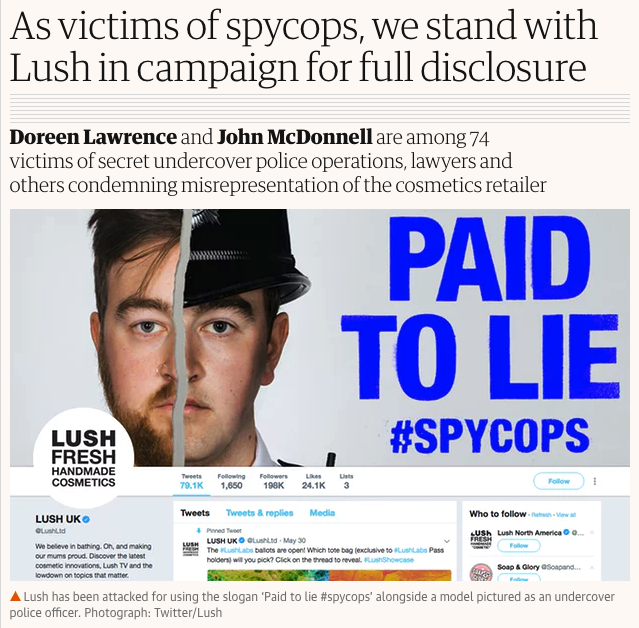 Using Brandwatch Analytics we can see that there were far more negative comments about the campaign than positive ones. You can find out how we do sentiment analysis here.

On June 1st, 67% of mentions (excluding neutral ones) were negative. Before the campaign Lush’s mentions were regularly over 80% positive.

That doesn’t look good, but it hides an important point. There was an incredible increase of overall mentions and one third were positive. So yes, while negative mentions increased dramatically, so did the number of positive ones.

Criticism of the campaign also died down quickly. By the 4th of June, with mention volumes still 7 times higher than usual, 66% were positive. By the 9th they were back to their 80% and over business as usual sentiment.

Called into Lush shop to buy present and express my solidarity. Along with many of the victims of #spycops I am grateful to Lush for supporting the campaign for truth and justice. It’s appalling its staff have been intimidated because Lush stood up for us. Let’s stand up for them pic.twitter.com/Hwhxfq8ade

A letter was published in the Guardian in support of the campaign. Signed by 74 victims of “spycops’ operations, and including MPs, MEPs, union leaders, and a range of activists, those pro the campaign were starting to speak out.

A tweet from the chair of the Cambridgeshire Police Federation was widely retweeted and criticised, with people claiming the police were intimidating Lush staff.

The ex-wives of undercover cops also defended Lush, as did, surprisingly, the Dorset Police and Crime Commissioner.

Amongst all of this Lush suspended the campaign due to staff safety, only to start it up again five days later.

In the end, for only three days did negative comments outweigh the positive ones. Bloch’s “mass consumer backlash” was certainly short-lived on Twitter. Meanwhile the “damage” he mentioned was an increase in sales.

So how did Lush get out of this with extra money in their pocket?

By the 11th, and with six days of the campaign left, the excitement had died down. Mention volumes were back to normal and few of them mentioned spycops.

It was back to bath bombs, soap, and shampoo, the massive social media and press furore behind them.

And, as we noted, Lush saw an increase in sales in this time. We reached out to their press office to clarify the number in the Guardian article.

On the day of the launch, sales were up 0.3% year on year, but for the whole period of the campaign, they were up 14%.

This goes against what most people would expect.

Of course if you only glanced at the negative response you would expect that. But a deeper look at this “PR crisis’ shows it’s never that simple.

As we previously said, positive mentions also skyrocketed during this campaign. Lush had struck a chord with some people.

Lush has also been politically active before. They’ve previously supported a number of eco and animal rights causes. In fact, that is their link to the whole spycops scandal. Many animal rights groups were infiltrated by undercover police officers.

People who knew little about Lush, and likely never shopped there, scoffed at a soap shop starting a spycops campaign. To those already invested in the company it made perfect sense and sat perfectly alongside their commitment to using eco-friendly ingredients and their anti-animal testing tote bags.

To really drive that home, we used Brandwatch Audiences to analyze followers of Lush’s Twitter account and those who used the boycott hashtag #FlushLush.

Aside from a mutual love of animals, these two groups are starkly different.

Followers of the Lush account are 87% female, compared to the Lush flusher’s 43%. Lush account followers are also more into beauty/health and fitness, food & drinks, and books.

#FlushLush advocates on the other hand are all about family/parenting, sports, and politics.

Ultimately the people most angry at Lush and calling for a boycott weren’t very likely to buy anything from the shop anyway. It was an empty threat, like a bunch of lifelong vegetarians saying they’re boycotting a butcher. The butcher won’t notice the difference.

For the other side, the people who already like Lush, they were less likely to have a problem with the campaign. Meanwhile, people who weren’t Lush customers but were sympathetic to the cause would now see the company in a more favourable light.

Just like John McDonnell, we found a number of tweets from people who had bought products out of solidarity, or were encouraging others to do so.

What’s the opposite of ‘not all that glitters is gold’?

Here’s a quote from Mark Ritson, a marketing professor, from an article he wrote ripping the #SpyCops campaign to shreds:

“…the moronic obsession with brand purpose has once again created another embarrassing, out of touch and entirely self-defeating bit of marketing stupidity.”

With hindsight and some sales figures, we can see that this, and his claims that “Lush will be hurt badly,” are completely wrong.

Ritson, it seems, is the one shown to be out of touch.

Even though Lush did not expect the size of the outcry they caused, they’ve proven that companies can involve themselves in ‘risky’ campaigns and come out the other side better than how they went in.

And they’ve taught a lesson to plenty of people out there: things don’t always go the way you expect.