March for Our Lives was Born on Social Media

How people are talking about the worldwide movement to protest gun violence on social media.

The fight against gun violence was always there, long before March for Our Lives. People protested neighborhood watch volunteer George Zimmerman shooting 17-year-old Trayvon Martin in 2012. They screamed at the top of their lungs when Dylann Roof shot and killed nine people at a church in Charleston, South Carolina.

However, mass participation, much of it through social media, reached new heights following the Parkland shooting. Since Feb 14, the number of social posts for March for Our Lives reached 11.6 million.

We looked at the social media conversation to see how March for Our Lives took off.

Before the March for Our Lives rally, activists organized National Walkout Day on Mar 14, a day for students to leave the classroom to protest the lives lost with a pull of the trigger. 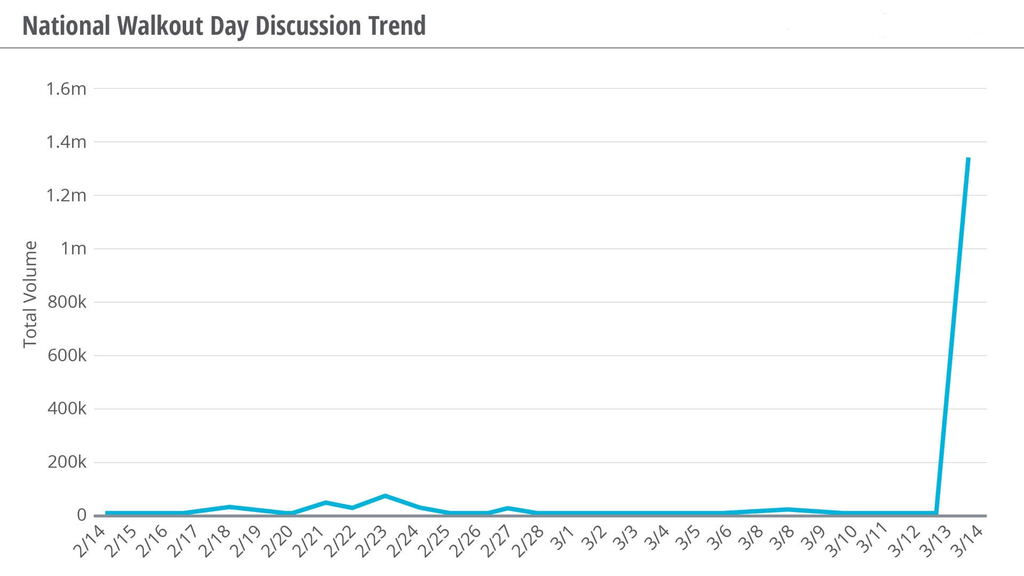 National Walkout Day generated a total of 1.3 million social posts the day of the event. 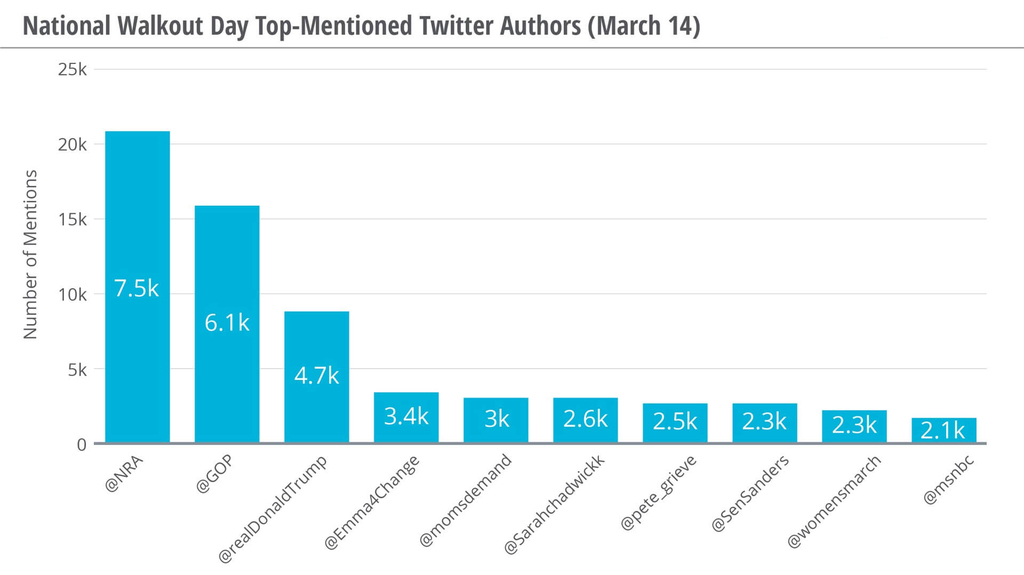 Students called the NRA out on corruption, expressed their disappointment with the GOP, and vented their frustration at Donald Trump for his support of the NRA.

Parkland student Emma Gonzalez was also highly discussed, as she emerged as a leading figure of March for Our Lives.

National Walkout Day added to the momentum for March for Our Lives.

March for Our Lives 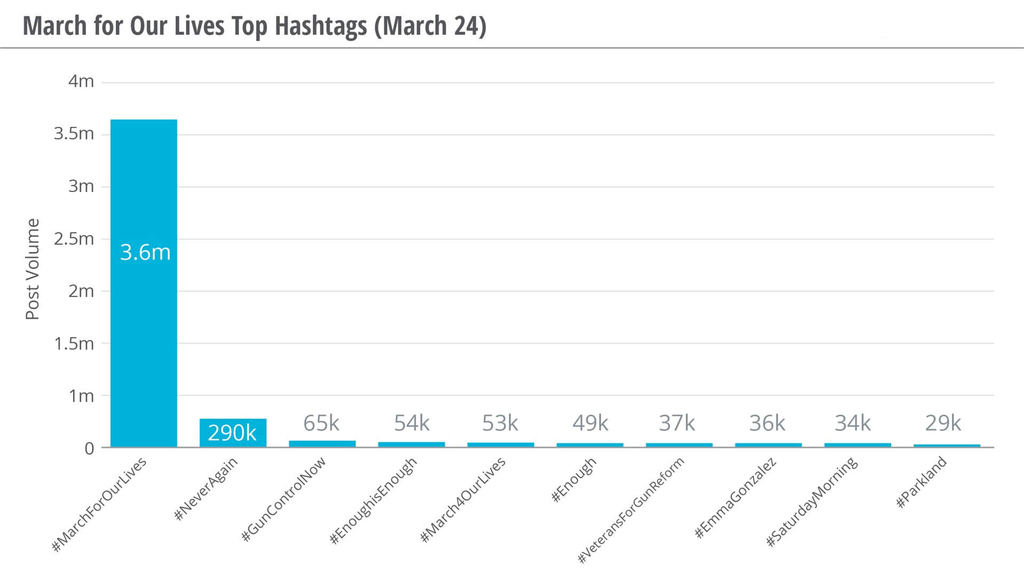 On the day of March for Our Lives, people tweeted #MarchForOurLives nearly 4 million times. Other top hashtags are #NeverAgain, #GunControlNow, and #EnoughIsEnough. 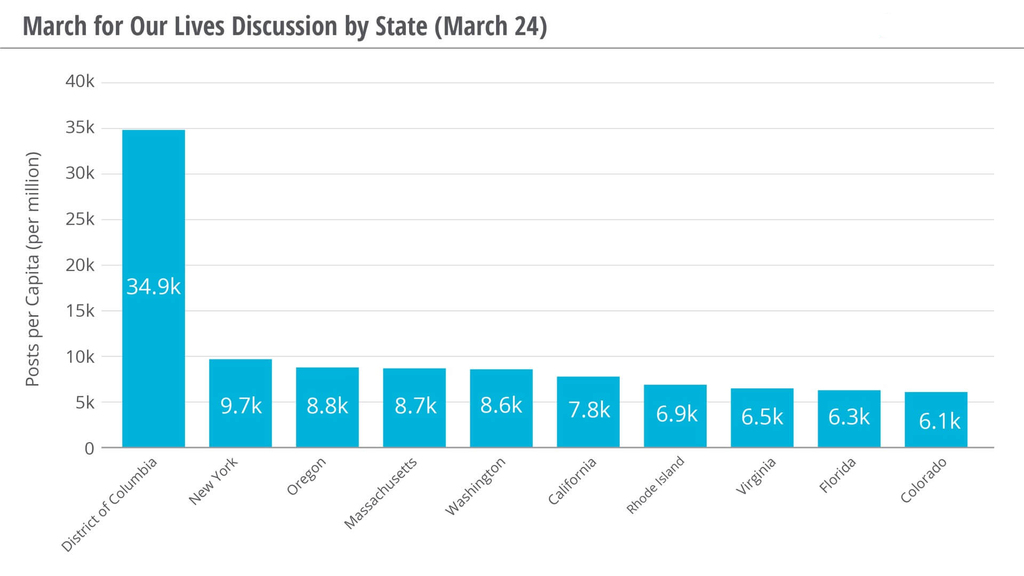 Looking at the geography of the March for Our Lives discussion, Washington, D.C., where the largest march was held, generated the highest number of posts per capita.

More people retweet and mention the Parkland students than they do for celebrities and politicians like activists Igor Volsky and Yara Shahidi, who have been outspoken on gun violence for years. 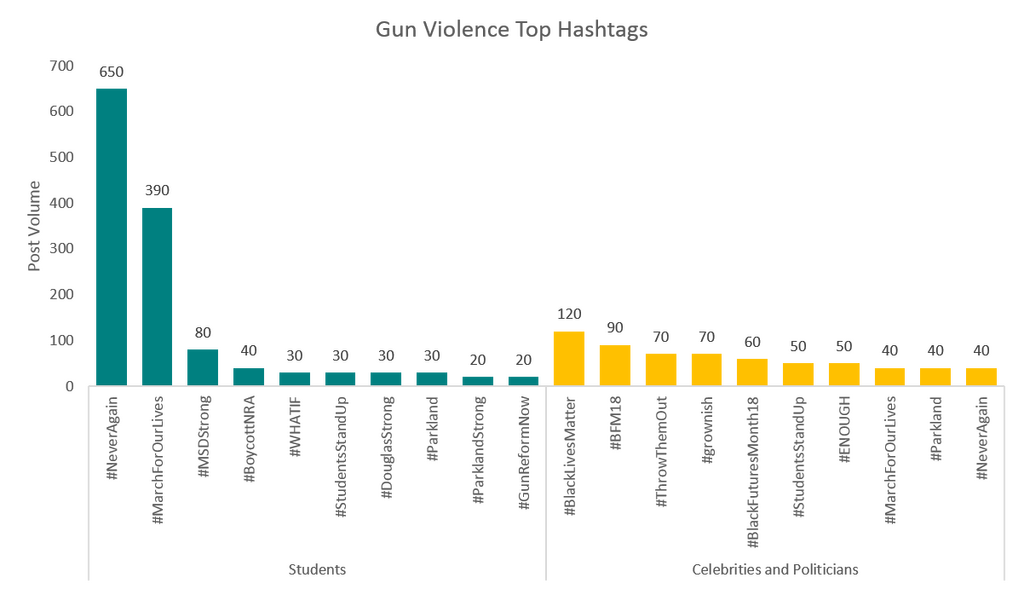 The difference between what the Parkland students tweet and what celebrities and politicians tweet is stark. Parkland students were more involved in organizing March for Our Lives and advocating for fellow students.

They also called for the boycott of the NRA and brands with ties to the NRA with #BoycottNRA. Celebrities and politicians were more invested in #BlackLivesMatter. They also showed support for students with #StudentsStandUp, but many have not called for an NRA boycott at the level the students have.

Social media plays a large role in certain movements and for March for Our Lives, it is not only a tool to disseminate information, but also a platform to energize and inspire. For example, David Hogg calling for companies to pull his attacker Laura Ingraham’s ads, worked for TripAdvisor.