Up in Smoke: How People are Consuming Marijuana

Marijuana has a lengthy history, going back to 500 BC. From the start, people used marijuana as medicine, recognizing its healing properties. The plant was introduced to North America for hemp-growing to make textiles, but it was criminalized in the 20th century, citing immigration-related reasons.

Since the criminalization of marijuana, the drug has been at the center of heated debate. Marijuana advocates push for legalizing the drug, citing reasons like how marijuana is an effective medical treatment, marijuana is safer than tobacco and alcohol, and marijuana prohibition disproportionately affects minorities.

In the United States, recreational marijuana is legal in nine states and medical marijuana in 30. There is overwhelming public support for marijuana legalization: a 2017 Gallup poll showed that 64 percent of Americans support legalization. Soon, Canada will blaze a trail by being the first G-7 nation to legalize marijuana.

These developments raise several questions. What does a more marijuana-friendly world mean for consumers?

Soon, more marijuana dispensaries will be open for business. And for those dispensaries to stay in line with consumer preferences and expectations, it is important for them to keep up-to-date with the latest marijuana trends by listening to what consumers are saying online. We analyzed millions of conversations about marijuana to better understand:

When it comes to consuming marijuana, there are endless options. It can be smoked, eaten, or drank. There are pros and cons for each method. For any company in the marijuana space, it is important to know which consumption methods are resonating with consumers and why.

Here’s the share of voice for the top marijuana consumption methods since 2010: 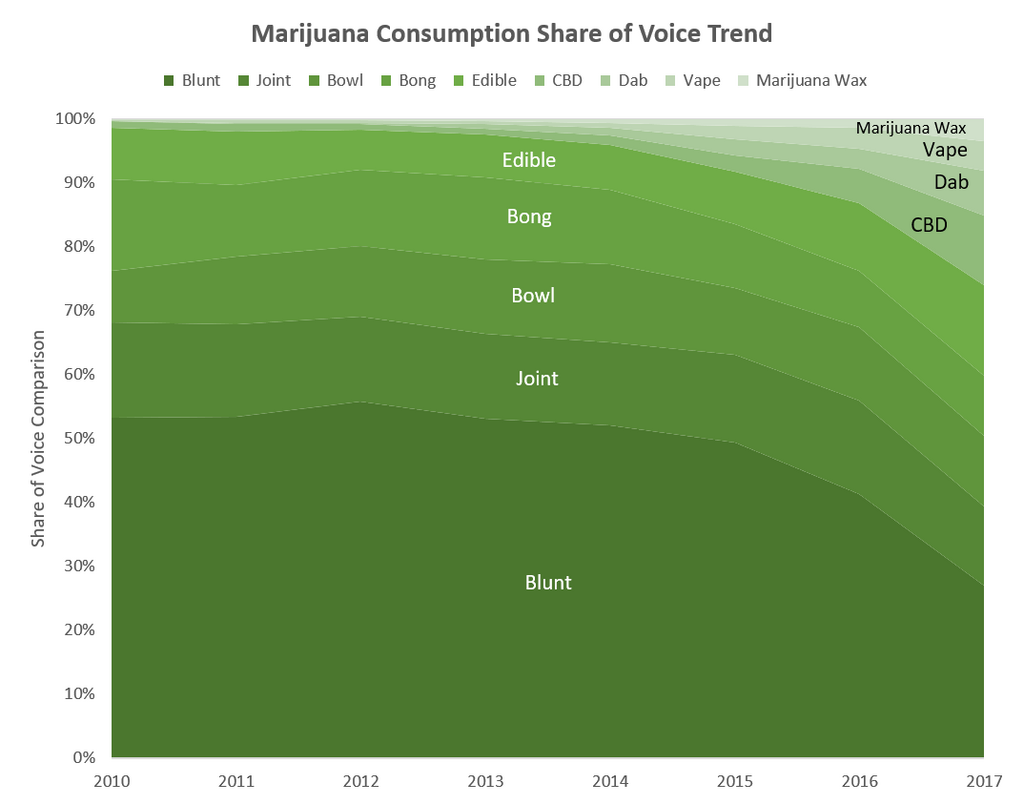 Clearly, a change is in the air.

Rolling blunts and joints are perhaps two of the most well-known ways to smoke weed, but their relative conversation volume is waning. Bowls and bongs come next, but these traditional methods are also losing ground to a more diverse set of methods.

Edibles are ingested for a different kind of high than smoking. Unlike the instant high achieved from smoking, an edible high settles in later and produces a longer lasting high. Edibles can come in many different forms: brownies, caramels, cookies, and more. The creativity with edible recipes and versatility makes this way of consuming weed popular.

However, the consumption methods to watch are CBD, dabbing, vaping, and marijuana wax.

The CBD conversation had just 1 percent share of voice in 2010. By 2017, its share of voice grew to 11 percent. With its medicinal benefits, including alleviating pain and anxiety symptoms, there is a ripe market for CBD.

Dabbing, which is a way to ingest concentrated marijuana, has also grown quite significantly, from 0 percent in 2010 to 7 percent in 2017.

Vaping’s share of voice has grown from 0 percent in 2010 to 5 percent in 2017. Vape pens are easy to carry around, making them a fuss-free and discrete option.

Marijuana wax, also known as butane hash oil, is one of the less discussed ways to consume marijuana. The wax contains a higher THC concentration. Its share of voice grew from 0 percent in 2010 to 3 percent in 2017.

The rising conversation volume for the newer ways to consume weed indicates that consumers are doing plenty of experimenting. But which consumption methods do consumers like best? 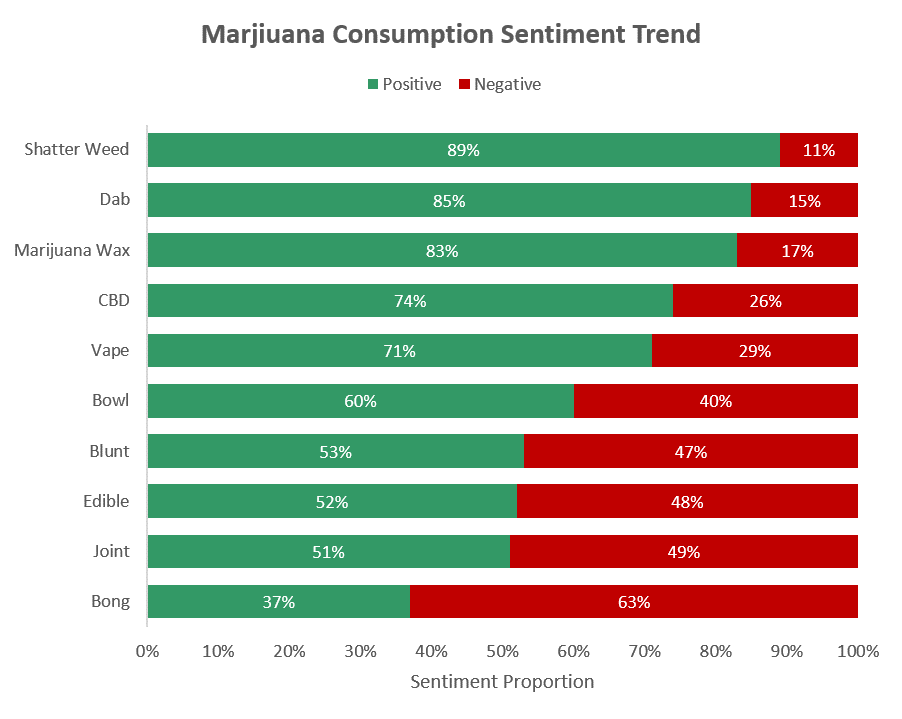 CBD also has high consumer sentiment, with 74 percent of the conversation being positive. With the ability to treat a multitude of conditions, CBD is viewed favorably as a medical remedy that also helps one relax and sleep better.

Vaping is a consumption method that is popular among a younger crowd. The convenience and ease of vaping makes it a favorite. Smoking from a bowl, which has 60 percent positive sentiment, derives much of that positivity from the easiness of the method.

Not all marijuana consumption methods are viewed as favorably. The messiness associated with smoking blunts and joints leads to more negative sentiment.

For edibles, they can be a hit or a miss. Not everyone enjoys the high produced by an edible; it is too strong for some. For others, edibles are ineffective.

Lastly, bongs have the highest negative sentiment. Cumbersome, large, and costly, bongs are not the most convenient way to consume marijuana. They also trigger coughs. 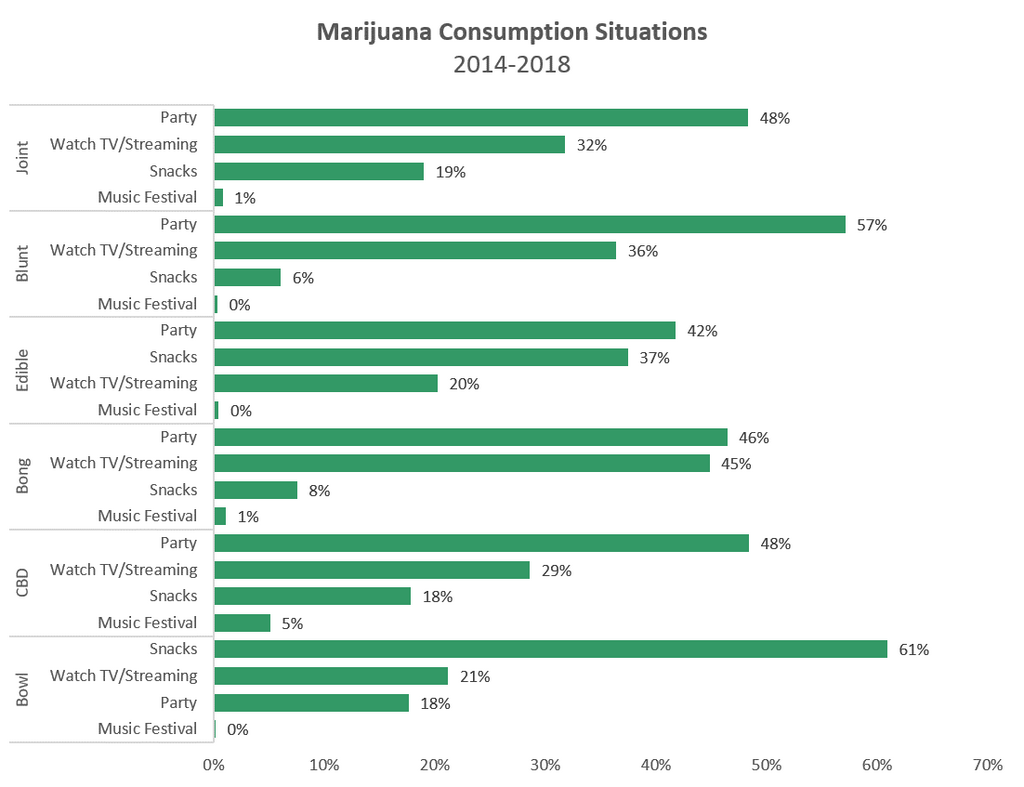 Choosing a method to consume marijuana is one thing, but where to consume it is another. We looked at the top six most popular methods — joints, blunts, edibles, bongs, CBD and bowls — in an effort to determine the settings where they are most frequently consumed.

It is important for marijuana companies to understand their audiences. We looked at the demographics and how that has changed over time. 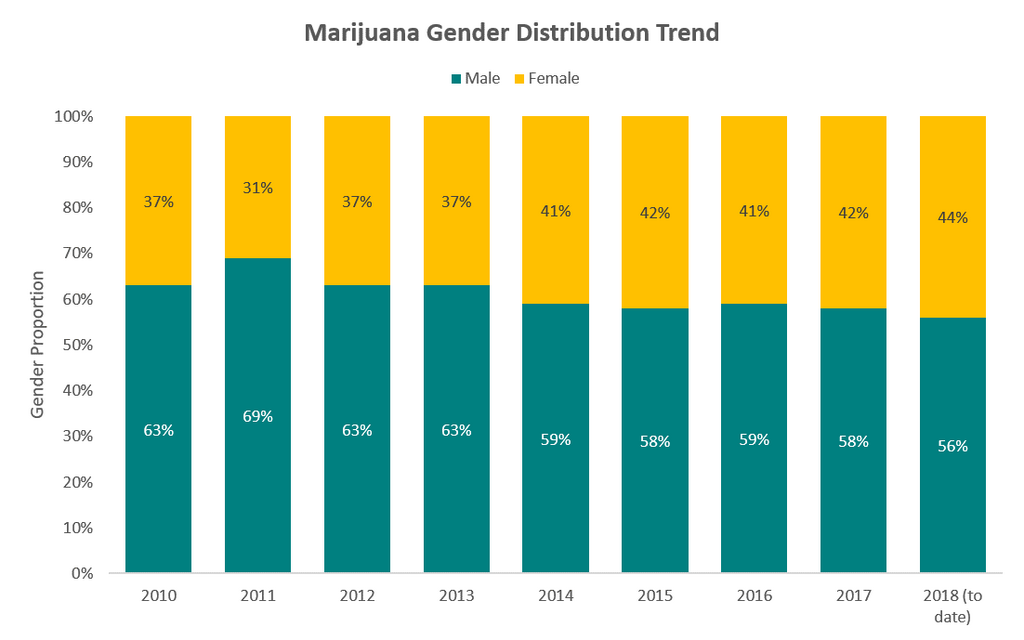 But gender is only part of the equation — what about the age breakdown? 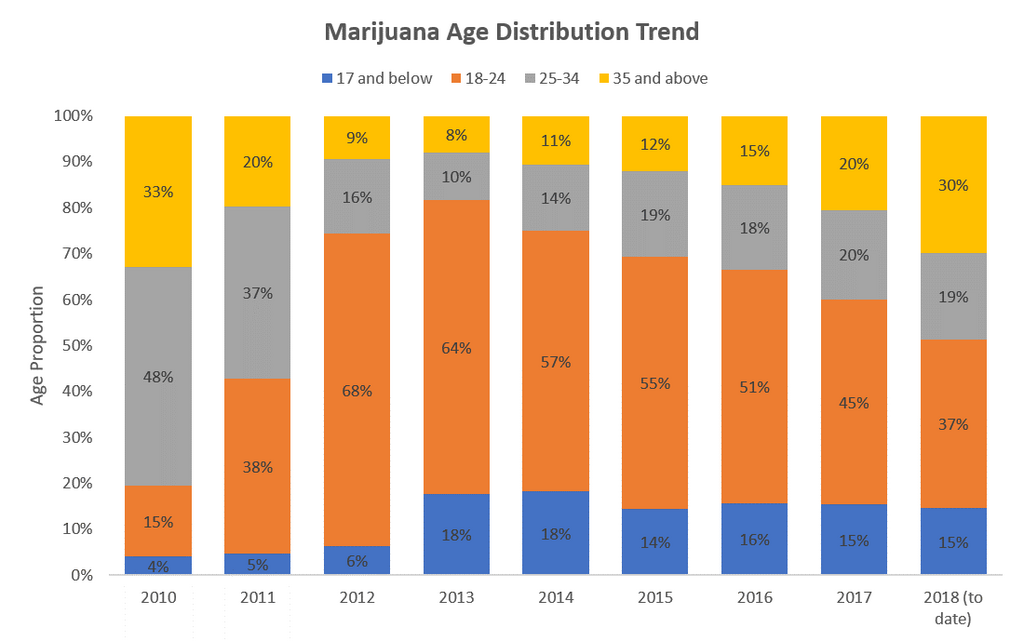 The marijuana audience is simultaneously becoming younger (17 and below) and older (35 and above). As vaping becomes more popular and marijuana becomes a more common treatment for medical conditions like chronic pain, it gains popularity among the two age groups. The 18-24 age range still accounts for the majority of the marijuana discussion, though its share of voice has risen (2010-2013) and fallen (2014-2018).

Long-standing laws are shattering to make North America a more marijuana-friendly place. And as reforms continue to be made, consumption habits change. For companies in the marijuana space, monitoring the social conversation about weed can help guide them to a higher understanding, as it appears legalization becomes more favorable.