“But Her Emails!” Unpicking the Social Media Phenomenon That Is Hillary Clinton’s Emails

The Brandwatch React team compares conversations about Hillary Clinton's emails and who is talking about them. Will the "but her emails" meme be overtaken?

Hillary Clinton’s emails, or lack of emails, are obviously a controversial topic.

While they were a huge part of the run-up to the election, they continue to come up in political conversations online.

We decided to take a look at the subtleties of the conversation, specifically looking at two sets of phrases: Firstly anything related to 3?k emails or 3?000 emails (‘?’ represents any character, for example 33k) and secondly the phrase “but her emails”.

Using Brandwatch’s Unlimited Historical Data, we looked at the use of those phrases over the last year.

Hillary’s 30k deleted emails (or 33,000 deleted emails, more specifically) formed a significant part of the criticisms leveled against the Democratic candidate during the run up to the US Election in 2016.

I wonder if there are 30000 emails stored there! #Hillary4Prison #Traitor

“But her emails” became a phrase used to undermine concerns about the missing emails, often forming a joke.

It’ll usually follow a pro-Hillary phrase or criticism of Trump.

*Hillary finds the cure for cancer*

Republicans: "BUT HER EMAILS!"

Do you see what Donald J. Trump is doing? That is why I voted for Hillary Clinton. I know, "….but, her emails!"

“But her emails” obviously took off much later, and has continued as a popular meme in itself.

They’re used by very different people – “but her emails” tweeters have words like “NotMyPresident” and “Resist” in their bios and ‘mom’ is a common descriptor. People tweeting specifically about the 30k emails appear more likely to identify as Conservative, fathers and Christians. 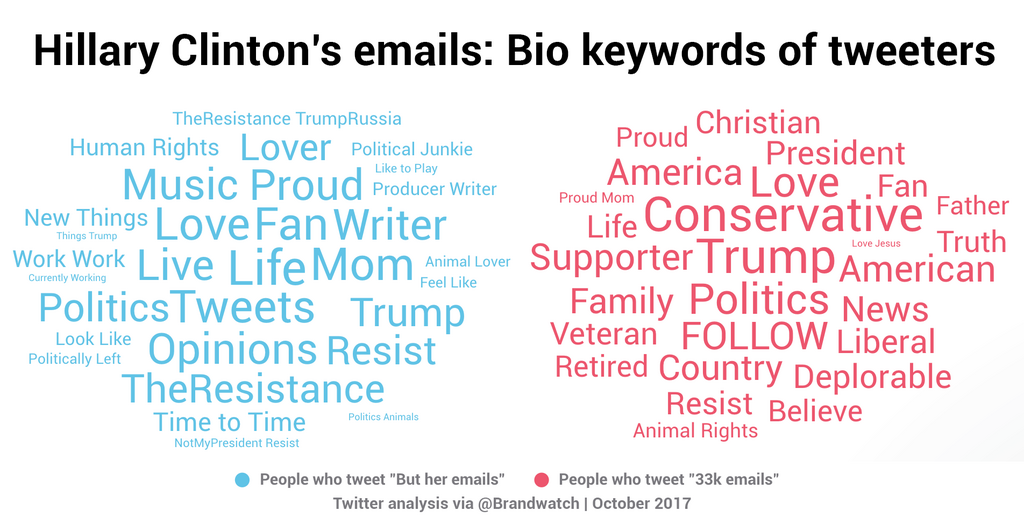 “But her emails” is tweeted more than “30k emails”

Interestingly, “But her emails” trumps “30k emails” mentions in tweets we tracked between April 2016 and 5th October 2017. 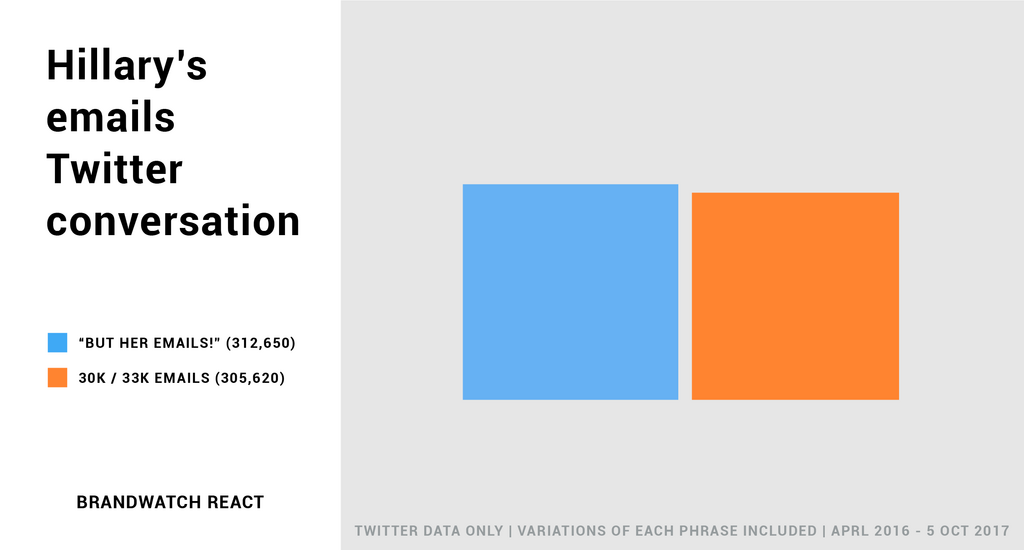 It kind of reminds us of an article we wrote on how there was a massive amount of coverage on the outrage caused by the revelation that a woman would play the next Doctor Who.

Despite all that coverage, most of the sentiment-categorized conversation about the event was positive. In the same way, someone who regularly uses the “but her emails” joke might imagine there are far more people out there complaining seriously about the emails than joking about them.

The email activity of two other high profile people in politics have also been of interest in recent days.

See that little turquoise spike at the end of the line chart? That’s the circulation of some interesting allegations about Jared Kushner and Ivanka Trump’s use of a private email server.

You’ll notice the incredible volume of Clinton-related email chatter over the last year. The tiny spike could be the start of a whole lot of social agro for Jared and Ivanka, or it could be a tiny blip that will never get near the almighty Clinton email spikes. I would guess the latter.

Will the story end there? Will the Hillary Clinton email meme be overtaken? Time will tell.

How to Leverage Instagram Reels to Grow Your Business