Covid-19: How Saving Money Became a Talking Point on Social

Why are people saving, and what for? Here's an analysis of how people are talking about their finances on public social media channels.

This global pandemic has shocked all of us, and millions are already feeling the financial pinch.

Record applications for government employment assistance have been submitted in the UK and the US , as millions of the workforce were laid off or placed on furlough.

Using Brandwatch Consumer Research, we explored the knock-on effects of this on how we’re talking about our finances online. We looked at English-langauge mentions from January 1 through to April 5.

More than a resolution

In January, a period of new year’s resolutions, there were three million people talking about saving on social media. But in March, during this pandemic, there were five million. 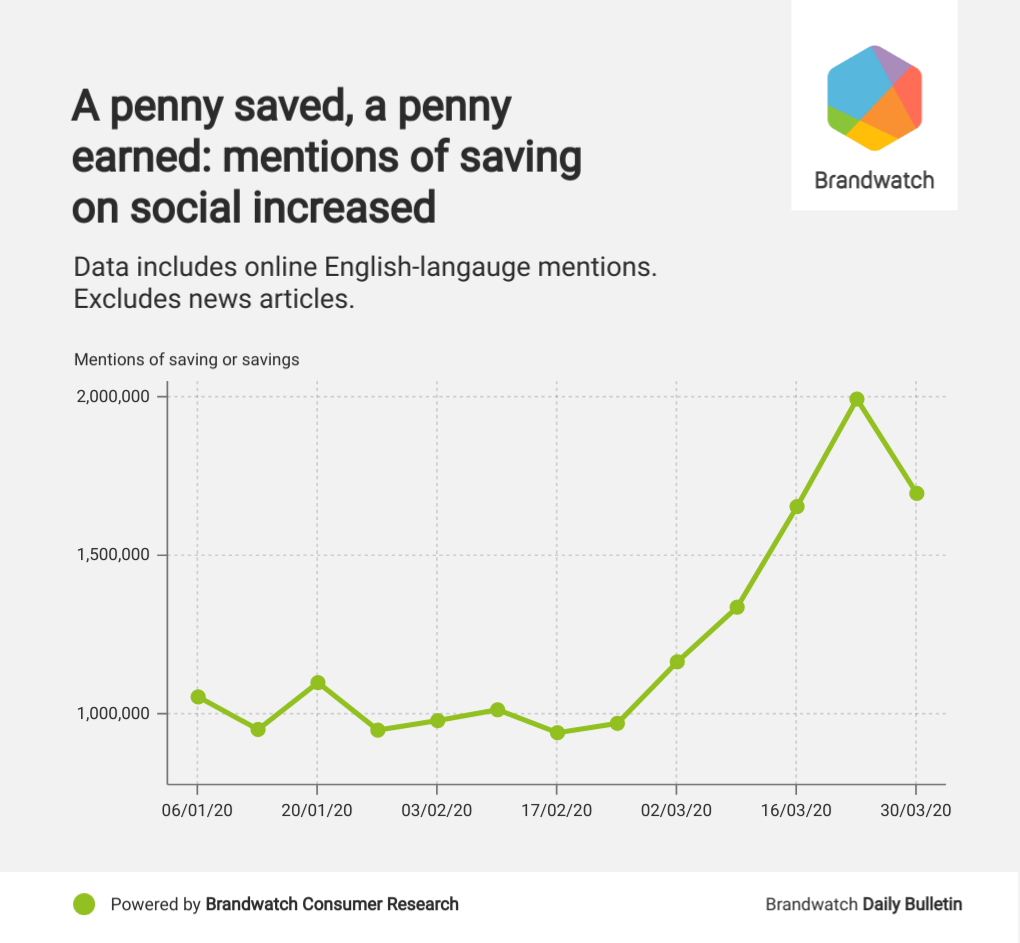 People are saving money to make sure they are protected in the fallout of this pandemic.

Unsurprisingly, future extravagant purchases weren’t mentioned in great volume within savings conversations. Those talking about saving their money just want to make sure they’ll be OK. We found that ‘family’ (with 1m mentions) and ‘children’ (with 593k) were strong reasons for saving.

In for a penny

There are 55k mentions of people saving money because they can’t go to stores and spend it, and this conversation was overwhelmingly positive.

Quarantine is really saving me a lot of money

Money saving challenges, like the 52 week challenge, gained some speed with 13k talking about taking it on. And people looking for tips on social for saving hit 35k.

In our US Financial Services in 2020 report, which covered the fallout of coronavirus, ‘savings’ and ‘unemployment’ were some of the most mentioned topics (measured 12-18 March) in a Reddit r/finance megathread.

There are plenty of people out there who are looking for advice on saving, indicating that some are looking for ways that a period of time without spending could put them in better financial shape than they were in at the beginning of the year.

But, for all the planners and saving ‘opportunists’, there were at least 95k people who said they had no savings, that they can’t save or that they don’t know how.

My mom just called and asked if I have an emergency savings account? I don’t know you tell me, did you keep any of my beanie babies?

It is recommended by some that everyone should have six months of a salary saved for times like this. But that’s extremely unrealistic for a large section of the population.

When people talked about having a little to no savings, or not knowing where to start, the overwhelming feeling from emotion-categorized conversation was sadness, at 49%. Anger was the second strongest emotion at 26%.

There were several notable roadblocks for social users who mentioned trouble with saving. 55k people mentioned precarious work, 30k admitted they ate out too much, and 9.6k said rent took a sizable amount of their income. It’s worth noting that eating out obviously isn’t much of an option anymore, and we’re seeing a rise in home cooking (in particular baking) as people explore food more in their free time.

To get them through, 14k admitted on social media that they still rely on the bank of mum or dad.

Just in case you were curious, finding saving a struggle was not related to gender. Consumer Research demographic’s feature revealed mentions to be 50% female and 50% male.

Personal finance in the future

It’s to be expected that consumers are stressed about their financial situations right now, especially for those who have no savings or are unable to save. For the time being, with lockdowns in place, people are actively looking for ways to save more, while it’s harder to spend. If your brand is offering payment holidays, or if you have a scheme that can help people in financial peril, these are the people you need to reach.

It will be interesting to see if these saving habits will continue in the long run, especially when lockdowns relax – having lived through a pandemic, will we all be more likely to keep a little extra in our savings accounts?

Get the latest insights on how consumer opinion and behavior around Covid-19 are changing, straight to your inbox. Sign up to our daily bulletin or weekly report for free.

Financial Services in 2020: A Cashless Future for the US?

Our new financial services report looks at how consumers in the US want to store and spend their hard earned money.