Parking tickets. No one is immune to them and only a minority of us will have managed to avoid them.

They’re up there with getting pooped on by a bird as one of the world’s most inconvenient gifts.

In the weeks following the US blizzards, NBC reported that a huge $1.4 million worth of parking tickets had been distributed in this time alone.

Hit with flashbacks of bitter trips to the parking office, we decided to further explore the world of traffic law enforcement in the US and the UK on social media so far in 2016.

By breaking down the data, we can understand more about who’s tweeting their parking ticket gripes.

California takes the lead as people take to social media to discuss those pesky road safety precautions, followed by the District of Columbia and New York.

There was a clean 50/50 split between volume of mentions between males and females, perhaps dispelling the myth of ‘bad woman drivers’.

It turns out we are all equally bad at parking.

An equally hot topic across the pond

Despite the UK being a mere 40x smaller than the US, the Brits are still holding their own in the world of parking problems on social.

London and Manchester were by far the biggest offenders.

US traffic cops seemed to have had a particularly bad start to the year, driving big spikes in mentions on January 27th as the news of the $1.4m tickets caused by snowstorms started to surface.

To add insult to injury, as if $1.4m weather-induced charges weren’t enough, parking enforcers caused a stir in New Jersey on February 9th after news broke of a Princeton professor reportedly being handcuffed to a table in response to a minor traffic violation.

In the lead up to Valentine’s Day, it seems people opened their hearts a little towards parking officers on February 14th – either that, or people were too loved up to care about the consequences of their ill-positioned Ford.

One thing’s for sure though. Whether you’re in the US parking up outside college or in the UK on your way to the BAFTAs, put one wheel out of line and you could be sorry.

So @idriselba didn’t get the win and I got a parking ticket.. a great night none the less #EEBAFTAs@BAFTA!! pic.twitter.com/ss7XakUG64

Although profession does not directly relate to your chances of receiving a fine, the data shows that some career paths have more angry parking ticket tweeters than others. 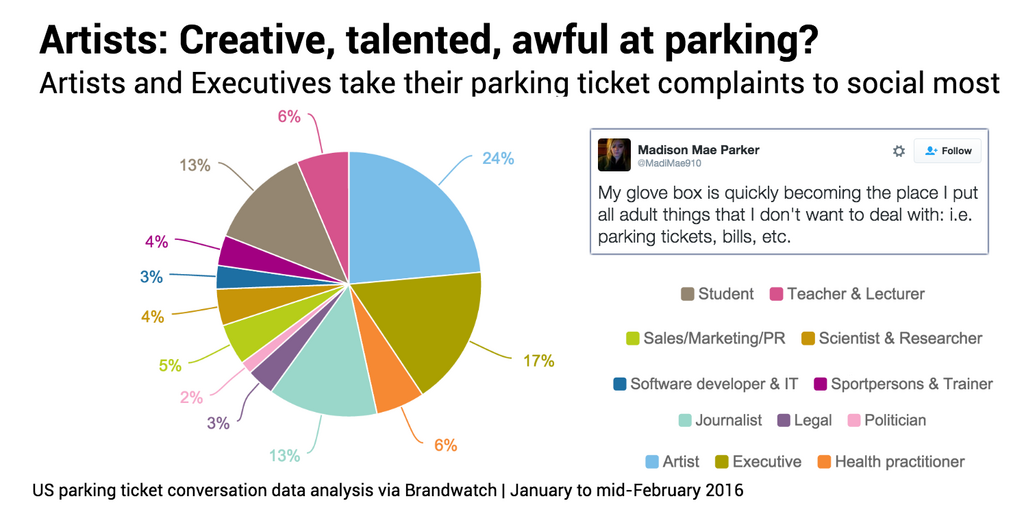 Our demographics analysis shows an interesting mix of professions, each with their own hang-ups about unwanted parking hand-outs.

Artists, students and executives all share the same bane. Journalists love to cover the stories, yet politicians, IT experts and those in the legal profession are slightly quieter overall.

No matter if you take to Twitter or not, we all know what it’s like to plead with a stranger to let you keep your money in exchange for a better attempt at parking.