Our annual coverage of the E3 conference returns. Check out our live blog for the latest social data on each conference and major announcement.

We’re back for the fourth year in a row, and we’re ready with the data.

This post is now up to date with data from each of the major conferences, including the top moments and most-mentioned games.

Skip to an analysis

Each year we look at the conferences and the games that generate the most mentions.

Looking at mentions occurring during air time that were related to each conference (e.g. #BE3, “Nintendo press conference”, etc), here’s how they each looked:

Which games triumphed? Once again, looking at mentions that occurred within each of the major conferences, we looked for which games got the biggest mention volumes as they were announced. 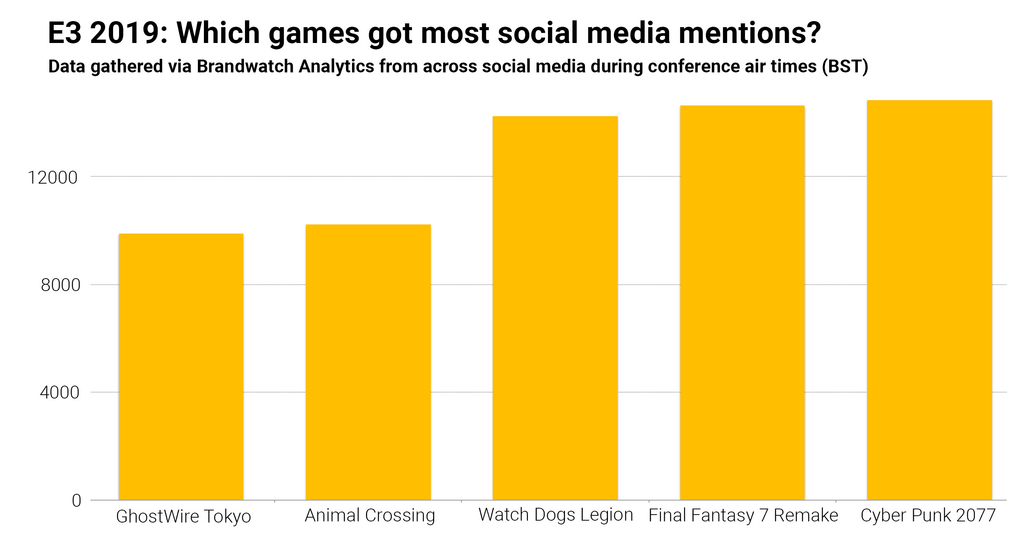 Congratulations, Cyber Punk 2077. This is definitely proof that celebrity cameos can pay off when it comes to making a splash at E3, with Keanu Reeves’ spot in the Xbox conference causing the biggest minute-long mention spike of all the conferences this year.

Since it’s pretty tight at the top, here are the actual volumes:

Keanu Reeves’ appearance left social buzzing for several minutes, but there were a number of spikes throughout the conference. Here are a few highlights:

Speaking of Keanu Reeves, the star made a huge impact on the success of Cyberpunk 2077, which was by far the top-mentioned game during the conference.

While Deathloop caused the biggest spike in conversation, there were several other big moments that drove conversation. Here are some of the highlights:

While Deathloop caused the biggest spike in a minute, and while DOOM Eternal got a large bulk of the screen time (while being teased from the beginning), it was Ghostwire, announced fairly early in the conference, that got the most mentions.

While Bam Bam the dog caused the biggest mention spike as part of the section on Ghost Recon: Breakpoint, there were several highlights that got people talking.

The extended section on Watch Dogs Legion towards the beginning generated a huge amount of conversation, with viewers loving the inclusion of Helen, the badass senior citizen.

Like we said above, Watch Dogs Legion was given a lot of air time and it paid off in terms of social media mentions. It was way ahead of the other games.

A cool addition to the top four is new title Roller Champions, which gathered more attention than some of the pre-existing franchises.

There were a number of things that caused spikes in conversation, even if Avengers caused the biggest one at the end.

While Avengers caused the biggest spike in mentions, it was the Final Fantasy VII remake, which was given a lot of air time at the beginning of the conference, that blew all the other games out of the water on mention volume.

Here are the top 10 most mentioned games during the Square Enix conference:

There were plenty of moments that got people talking during Nintendo’s short conference, but it was the final moments that really sent social into a spin.

Despite being the driver behind a huge mention spike at the end of the conference, the Breath of the Wild sequel isn’t the top mentioned game of the Nintendo conference.

It was actually Animal Crossing that took the title.

This year we are tracking mentions of all of the above conferences across public social media posts. We’re tracking the official (and unofficial) hashtags, as well as mentions like “Nintendo conference” or “Bethesda press conference” etc. We’re also tracking very general mentions within the #E3 conversation.

All game mentions tracked for this blog are within the E3 conversation, not standalone (they must be mentioned alongside something E3 related to be included).

We’re tracking these mentions on a 10% sample..

Email [email protected] for more information on our data.