Brandwatch analyzes social media reaction to E3 2017, including commentary and social round-ups from each major conference.

The Brandwatch React team has been tracking social media’s reaction to E3 2017, providing social data round-ups of each major conference and live tweeting data as we go.

Now, get your coffee and snacks out and enjoy the full social data review of E3 gaming delight.

All games and conferences: A summary

We broke those mentions down by specific conferences and, in short, Microsoft bossed it. Their launch of the Xbox One X certainly had something to do with that. 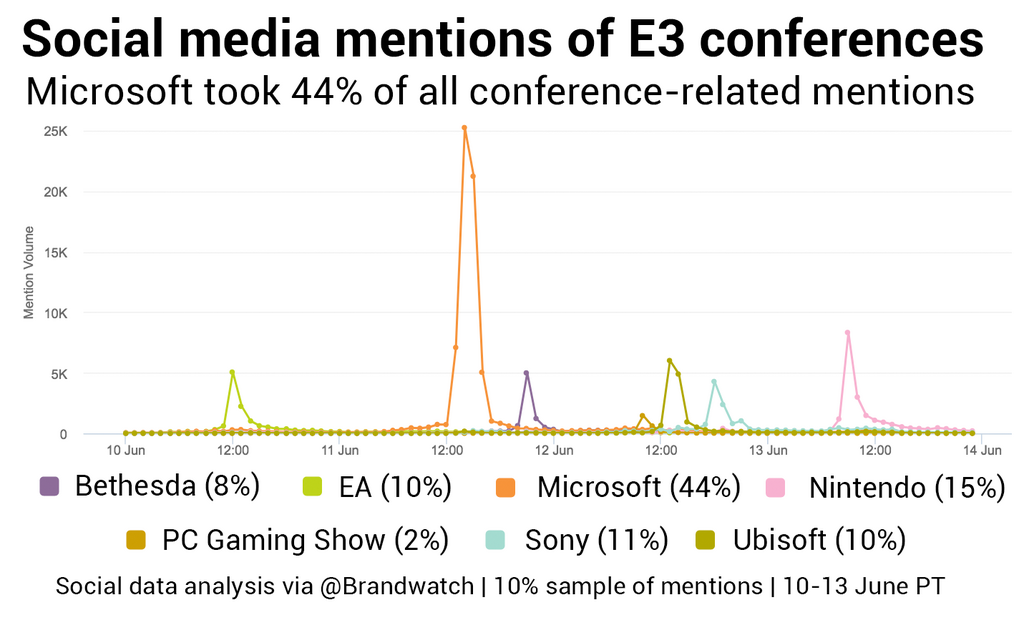 Looking at games announced at the major conferences, it was Assassin’s Creed that triumphed with more mentions than any other game.

Methodology note: We searched for mentions of all of the games that had extended trailers or mentions by the speakers at each major conference (you may notice this omits some games from the Microsoft conference that were discussed in terms of backwards compatibility as well as the section where around twenty games were presented in lightning-speed succession).

And now, we can sleep.

Jump to a conference

Highlights were a little mixed – many of the biggest spikes had no specific tweets or messages driving them, but often had a multitude of titles trending within them. We’ve marked the prominent words that cropped up in the mention spikes.

The “men in blazers” spike also featured words like “cringe”… As for games, new title “A Way Out” got the most significant spikes and was the top-mentioned game overall in that hour.

Need for Speed also did well, and given the very short trailer, Anthem got a big reaction (we’ll be hearing more on that in the Xbox conference).

Highlights: Once again, the fairly quick succession of games meant there were often mutliple titles or trends driving the minute-by-minute mention spikes. Key findings were that people were quite irritated by the promotion of the real-life car during the Forza 7 announcement and the lengthy, shouty e-Sports commentary during The Darwin Project announcement. Here are the most prominent parts of the mention spikes:

There were an incredible number of games discussed during the conference. We searched for mentions of all of the games that had extended trailers or mentions by the speakers (basically, skipping games that were discussed in terms of backwards compatibility and the section where around twenty games were presented in lightning-speed succession). Assassin’s Creed: Origins appeared to be the overall winner. Highlights: The gentle pacing of the Bethesda conference meant spikes in mentions were a little easier to define.Here are the most prominent parts of the mention spikes – all game related:

Games: Skyrim had the largest mention spike, but Wolfenstein 2’s peak was a little longer-lived.

Skyrim was the top-mentioned game throughout the whole of the Bethesda conference, followed by The Evil Within 2 and then Wolfenstein 2.

The highlights of Ubisoft’s conference on social media came about mostly towards the end, with the most prominent spikes occurring while Beyond Good and Evil 2 was being announced. Here are the most prominent words and phrases driving the mention spikes. 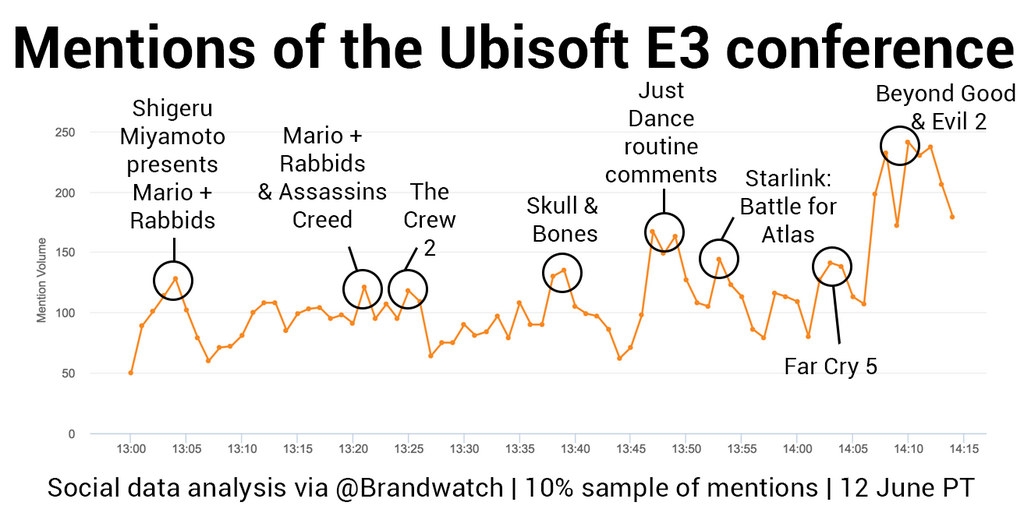 Games: Beyond Good and Evil 2 undoubtedly caused the largest spikes in conversation, although the extended Mario + Rabbids: Kingdom Battle announcement at the beginning of the conference had the most sustained hype. 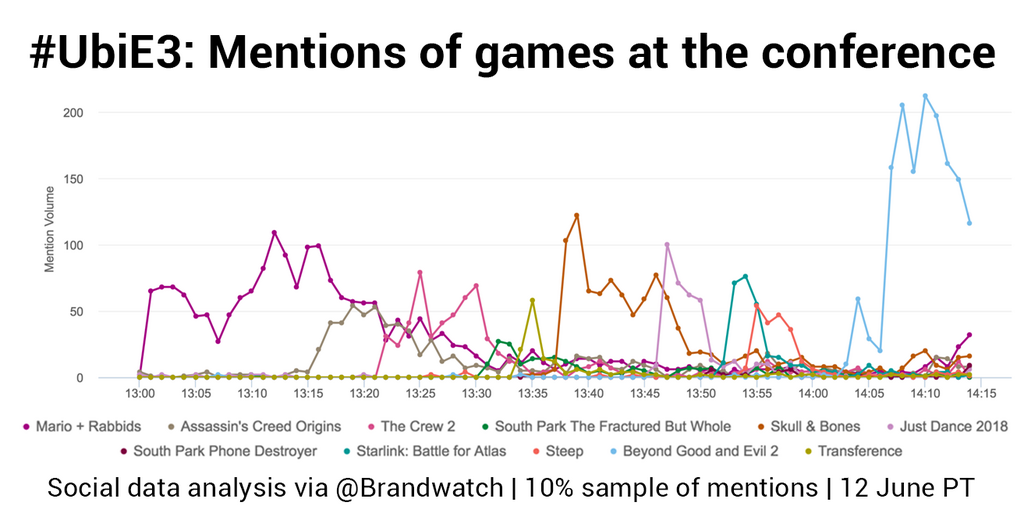 Overall, Mario + Rabbids was the top-mentioned game during the conference, followed by Beyond Good and Evil 2 and pirate game Skull & Bones.

Highlights: The themes behind the biggest spikes tended to incorporate multiple games or messages. For example, at one point people seemed incredibly enthused by “VR fishing” featured in Monster of the Deep, and compared the mouse in the Moss trailer to Stuart Little. However, Spiderman’s long finale trailer earned it multiple spikes.

Highlights: The largest mention spike during the conference (not counting the end of conference spike in comments) was when Metroid Prime 4 was announced. 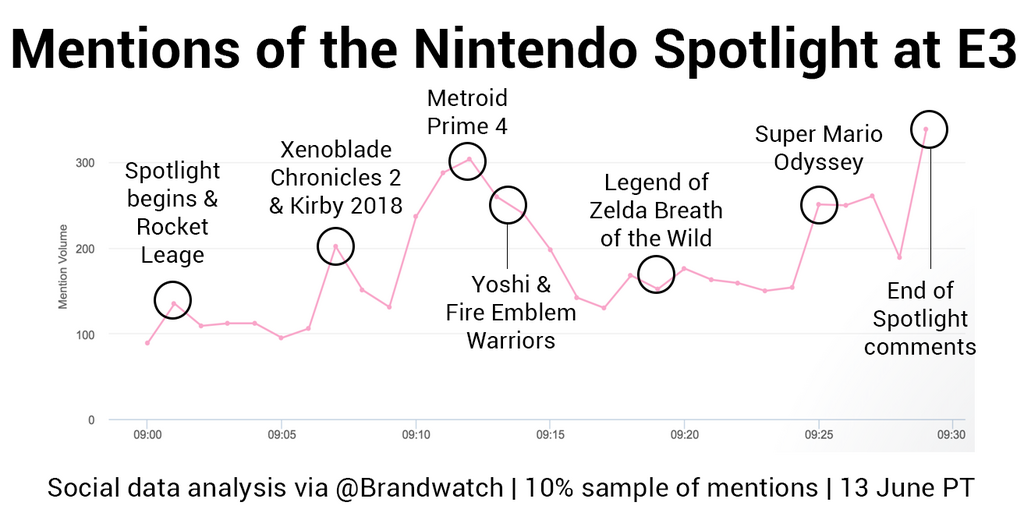 Games: Metroid Prime 4 and Kirby drove the most significant game-related mention spikes during the Spotlight. Overall Metroid Prime 4 got the largest number of mentions, followed by Kirby 2018 and Mario Odyssey.

To track conference mentions, the Brandwatch React team has set up queries that track E3-related brand mentions. They operate on a 10% sample. For example, our Bethesda query incorporates hashtags like #E3Bethesda and #BE3 as well as mentions like “Bethesda’s E3 conference” etc. The charts shown above that cover the conference highlights are generated by these queries.

To calculate the game mentions during conferences, we have rules that categorize game-related mentions in both a general E3 query (tracking mentions like #E32017, #E3, etc on a 10% sample) and the conference specific queries (the ones described above). We present them together in the dedicated game charts.

To track game mentions overall (in the extended bar chart in the summary section above), we calculated the number of mentions of each game within all of our E3 queries, since some were mentioned at multiple conferences. That included the general E3 query as mentioned above, as well as dedicated Nintendo, Sony, Bethesda, Microsoft, Ubisoft, EA and PC Gaming Show queries, all on a 10% sample.

Learn how digital consumer intelligence can power up your competitor analysis, from measuring share of voice meaningfully through to reviewing the competitive landscape.