The Brandwatch React team gets to grips with the data surrounding the stars, awards and drama, providing the GRAMMYs 2017 highlights on social media

From high profile performances to child-cameo-turned-meme, behold: the GRAMMYs 2017 highlights on social media.

There was no shortage of drama.

We thought we’d take a look at mentions of each nominee for three major categories to see if it tallied with their chances of winning a GRAMMY. Looking at buzz surrounding the artists, songs and albums within GRAMMYs-related conversation on Saturday 11th February and comparing it to the buzz during the show, the results were mixed.

Record of the Year

Adele’s ‘Hello’ ate up the competition on Saturday as well as Sunday. A clear winner both on stage and on social.

Song of the year

Adele’s win was even more stark when it came to Song of the Year, as she stomped all over massive hits like “I Took a Pill in Ibiza” and “Love Yourself”.

Album of the Year

But wait! Adele didn’t appear to be the favorite to win Album of the Year at all on social. Her loyal following were nothing compared to Beyoncé’s and even as 25 won the coveted ‘Album of the Year’ prize it failed to overtake Beyoncé’s Lemonade.

To be fair, Adele may have been responsible for a lot of the Lemonade buzz on Sunday night…

Around 60% of the GRAMMYs online conversation was penned by female authors, which is no surprise given who ran the world on Sunday.

Beyoncé’s GRAMMYs performance gave us the first major spike on social media, followed by her daughter Blue Ivy wandering into shot while James Corden led a Carpool Karaoke segment. This moment, which was quickly meme-ified, was behind the highest peak in mentions for the whole evening.

The next biggest moments came from Adele, first in her tribute to George Michael (which she had two goes at) and second in her “Album of the Year” acceptance speech, in which she called Beyoncé’s contending album Lemonade “monumental”. 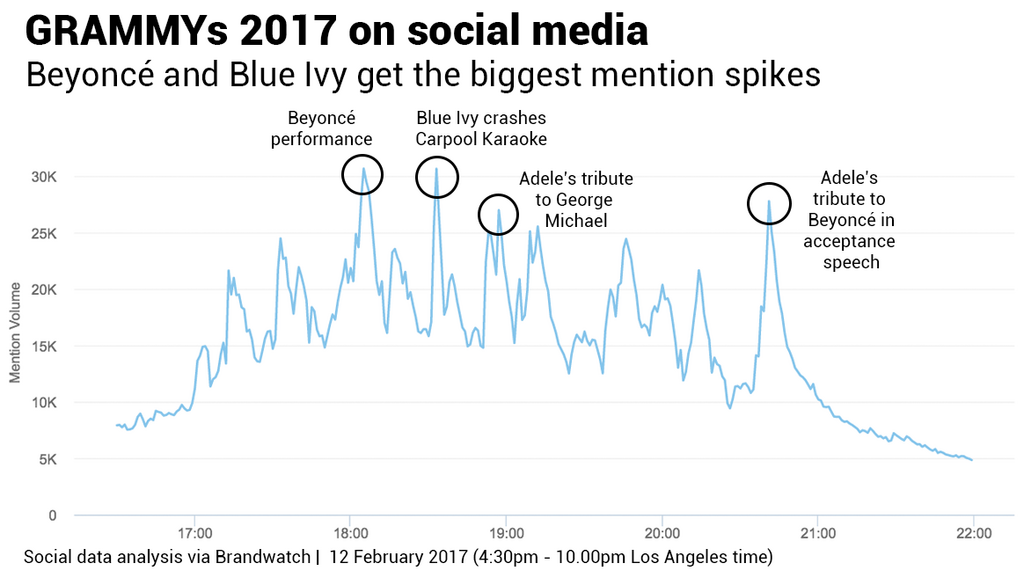 People in the spotlight

Despite Beyoncé and Adele taking the top moments, it was Lady Gaga, Katy Perry and Chance the Rapper that caught the most attention over the whole of Sunday. God and Demi Lovato also made significant appearances in mentions.

Our topic cloud reveals the top used words and phrases within the GRAMMYs conversation from Sunday:

There was a surprise appearance from @bey_legion, a fan account dedicated to Beyoncé. We interviewed the owner of the account last year on how to build a huge following, and it appears they’re still going strong! 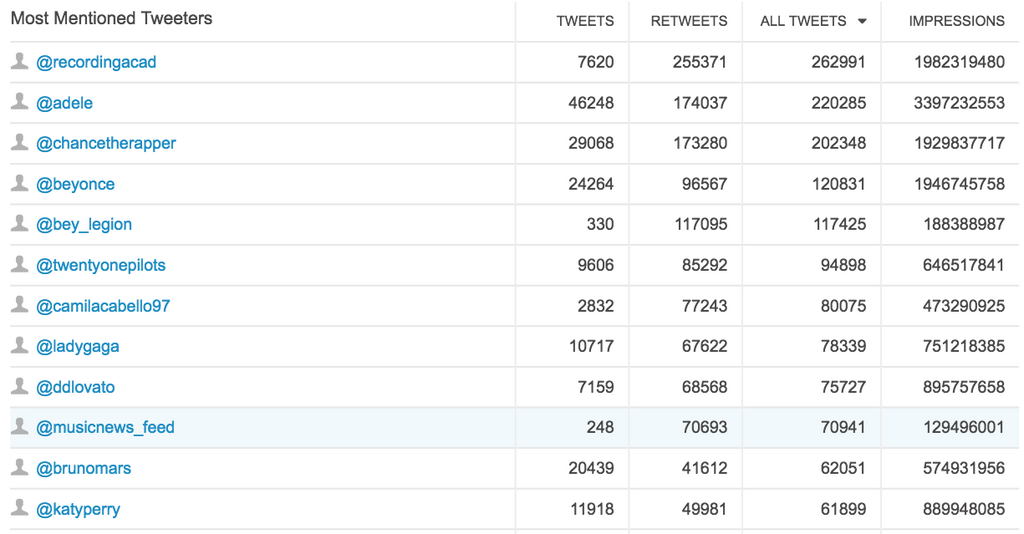 What was your favorite moment from the GRAMMYs 2017 highlights? Let us know.

If you’re a journalist looking to cover our data email [email protected] for more information.

US Election 2020 Unpicked: How Did Speeches Differ From Social?

Tough Times: Which Products and Trends Lost Out in 2020?