React: Looking to Invent the Next Big Thing? Twitter Can Help

Brandwatch analyzes social data surrounding new products Twitter thinks would be useful. Wondering what the next big thing will be? Our data can tell you.

As we know all too well, the world of Twitter is a catacomb of insightful and often ingenious opinion and thoughts: “Look at my dinner”, “My favourite dogs are pugs” and so on.

Sifting through these thick layers of poetic artistry and meticulously thought out prose can be difficult, but with social intelligence, Twitter can act as an enormous focus group, a source for ideas and a way to identify gaps in the market.

Despite the often basic chatter, Twitter is a valuable collection of people, a large audience with wants, needs, hopes and dreams – as well as pet preferences.

We decided to search for what today’s tweeters want invented to see if we could identify “the next big thing”.

Using search terms with variations on “Why hasn’t someone invented _____ yet?” we were able to identify patterns in desirable inventions that entrepreneurs may just want to snap up.

I mean, really. Why haven’t they invented an alarm clock that releases the smell of bacon?

After studying the data we identified four main categories of things that Tweeters wish could improve their life in some way. 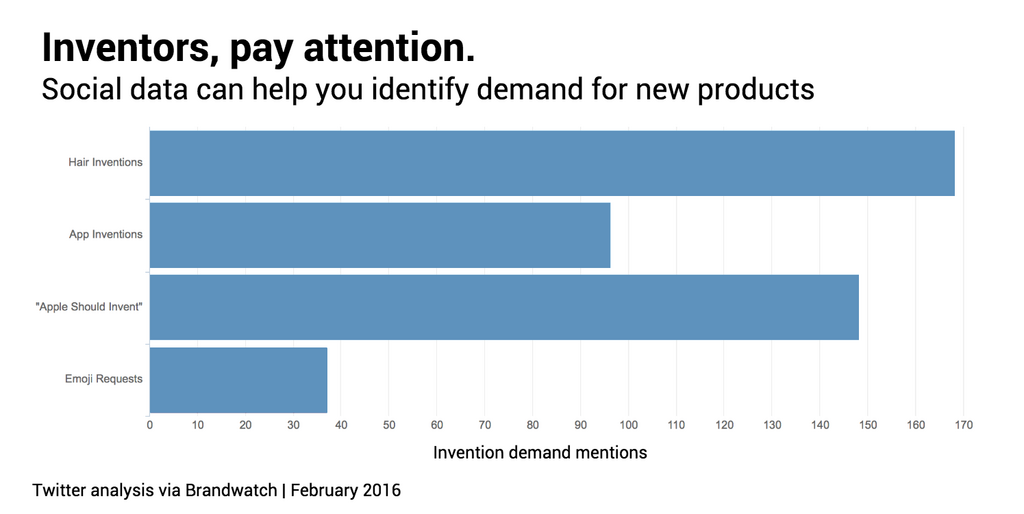 It’s clear to see that a significant portion of the Twitter population still haven’t got their hair on fleek as nearly 200 people last month begged for a hair-drying, hair-cleaning or hair-growing solution.

Someone needs to invent a dry shampoo for when your hair is so greasy that even your normal dry shampoo is like “nope.”

some one needs to invent a quicker way to dry hair, hair dryers just aren’t cutting it???????

The results are in. Listen up haircare brands, this is what the people of Twitter are asking for:

Requests for new apps accumulated nearly 100 mentions in just a month and a half.

Twitter clearly isn’t put off by saturation of the app market as they pitch their suggestions on social media.

Someone needs to invent a tinder like app so you can find people to show you around cities while traveling. I’d pay good money for that.

[Someone needs to create an app called ‘Whatsis?’ where I can take a pic and identify stuff. Mostly flower types, dog breeds, & car models]

Someone needs to invent an app that blocks news and pics of: 1. snakes; and 2. Kardashians from my social media feeds.

One of you computer geeks, needs to invent a, find my sky remote, app. Mines done the off…..again!

The ideas are plentiful, good and bad. However, an app that allows you to find friendly, local tour guides in different cities doesn’t half sound like a good way to improve travel experiences.

Listen up Apple, this one’s for you

Twitter isn’t vague in their speculation about the next wondrous invention.

They’re heading up the mission to get these ideas to the manufacturers themselves, with almost 150 tweets pitched directly at Apple.

It seems Apple’s product innovation, development and release strategy have set them aside as the go-to for new invention requests on Twitter.

Apple needs to invent a feelPad so I can pet animals through iPad. I don’t know how this shit’s gunna work, but they need to make it happen

The idea of a group FaceTime, a two or possibly three-way FaceTime chat feature was the most suggested invention for this category.

A huge 82 out of 148 mentions asking Apple to invent a new product were from individuals pleading for a more sociable FaceTime.

Other ideas include an Apple car, an Apple phone service, a built in iPhone dictionary and thesaurus and finally, the introduction of a feature allowing texts to be recalled.

When searching for the world’s next big idea, we found a lot of mentions of those controversial little icons that you either love or hate.

Emojis took the digital world by storm and are now a fluid part of many people’s language, communication and interactions.

Despite the wide range already on offer, the people of Twitter want more of those little smiley faces and we found out which un-invented emojis would put a smile on tweeter’s faces if released: 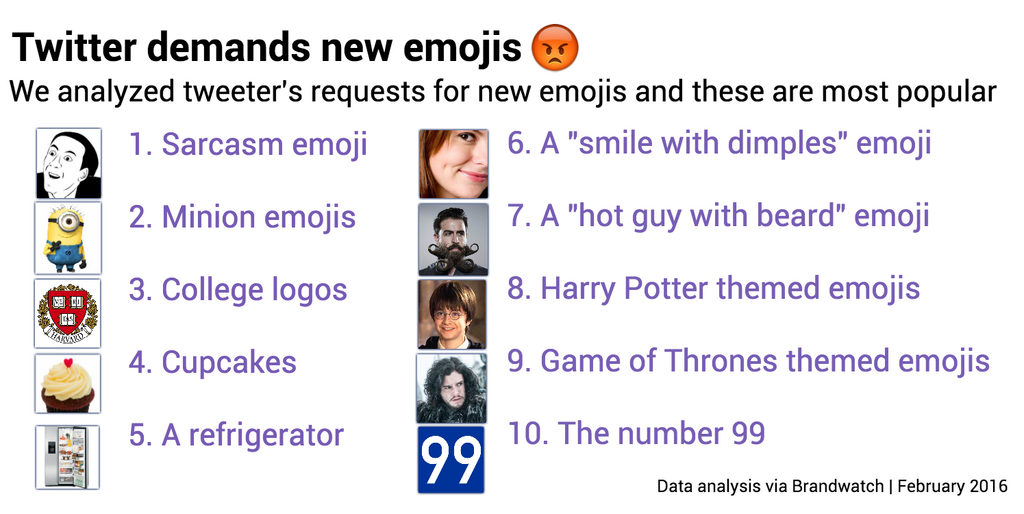 The people have spoken

Social intelligence for some product marketers can be the missing link between product performance and success.

Many marketing companies spend time and money sourcing product feedback and brainstorming roadmaps, before listening to the opinions of real unbiased customers like those tweeting about their day to day problems on social media.