Searching For The Meaning Of Life Using Social Media Data

It’s early on Monday morning and I’m currently having an existential crisis.

I look at the screen, around the office, into my black coffee that’s reminiscent of the black void and wonder, what does it all mean?

What is the meaning of life? What is the purpose of existence? These are the questions we have been asking ourselves for as long as we have been sentient, and questions I found myself asking in the dull glow of 7.30am streetlights on my walk to work.

Great men such as Plato and Nietzsche pondered these questions and found no conclusions so how can I? Well fortunately I exist at a point in time with more digital data than any other point in history (approximately 1.2 zettabytes, that’s 1.3 trillion gigabytes – insane, right? And that’s what the estimate was in 2010!). Also, fortunately, I work for Brandwatch, the premier social listening tool which means I’m in prime position to unpick this myriad mystery and cement my name amongst the great philosophers.

(Ok, maybe not, but it can’t hurt to see what people say about ‘the ultimate question’).

Using a Brandwatch query to ask those big questions like “what is the meaning of life?”, “what is the purpose of humans?” and “why do we exist?”, we gathered thousands of mentions over a year long period, from September 2016 to September 2017. Mentions were tracked on Twitter, Instagram, Facebook and Reddit.

Prominent theories on the meaning of life

Let’s start by looking at the most popular topics that emerge from authors discussing the meaning of life:

Meaning of life is to find…?

Purpose of life is to give…?

Thankfully these questions can be more easily answered, and upon clicking into the topics we discover that these are linked to form the #inspirationalquote:

While this may give you the inspiration to finally do something with that canvas you’ve had sitting in your shed ever since Bob Ross was introduced to Netflix, it wasn’t in fact Pablo Picasso that said this. #FakeNews.

This quote from Eleanor Roosevelt, while it looks good on an Instagram snap of you in a kayak, in a jungle, near a waterfall, with the hashtag #wanderlust, isn’t the most definitive answer to my search.

A rather more existential solution to the problem is this one, that empowers the user to give life their own meaning. So if binge watching TV in your pants whilst eating hotdogs at three in the morning is your kinda thing, maybe that’s all there is to life (this is what I tell myself at least).

Alternatively, if helping others, making music or getting rich is what matters to you, then that may well be your purpose.

The meaning of life is to give life a meaning.

How about getting more granular? Using custom rules in Brandwatch Analytics, we can segment our data into categories based on popular beliefs around the meaning of life. Terms relating to finding love and happiness make up our happiness category, while terms about becoming rich make up our wealth category and so on. 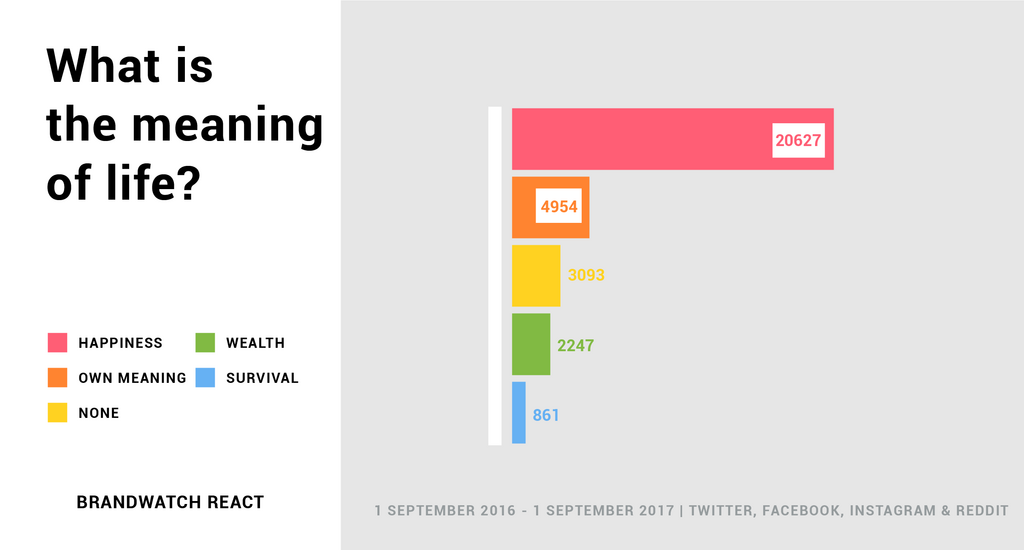 Encouragingly, people tended to veer more toward being happy and finding love as the purpose of life rather than getting rich, with authors being 900% more likely to strive for happiness over wealth. I’m not sure I could’ve handled the loss of faith in humanity right now.

Giving life its own meaning emerged as popular, seeing the second highest volume of mentions, while those inclined to a more nihilistic viewpoint also saw good representation. This has prompted me to send a ‘u ok hun’ to all the authors within that category.

As our primitive roots are eradicated further and further, and we have effectively conquered the food chain, survival and reproduction is no longer seen as life’s essential purpose. It appears to have been replaced with a desire to have meaning rather than simply exist and thus survival as the meaning of life was the least represented answer.

Despite all this I have found myself more inclined to agree with this rather inspirational/depressing quote:

Life does not have inherent meaning; to say that our lives are pointless and our achievements meaningless is to state the obvious. No matter how grand our achievements or how broad their scope, time turns all to dust and death destroys all memory. But that does not mean we cannot ascribe our own meaning to what we do. It is because nothing has meaning unto itself that we are free to create meaning, to make metaphor, and in doing so reflect on ourselves and our world.

Who said this? Camus? Sarte? No, this was in fact internet legend CirclMastr, famous for being the man who spent 500 hours playing one level of Final Fantasy VII to spite someone on the internet called Dick Tree.

A worthy cause we can all get behind.

The meaning of life, contemplated by all

What can we learn about the people searching for answers? Well using Brandwatch Analytics, we’re also able to breakdown authors by gender to reveal differences between men and women’s quest for meaning. 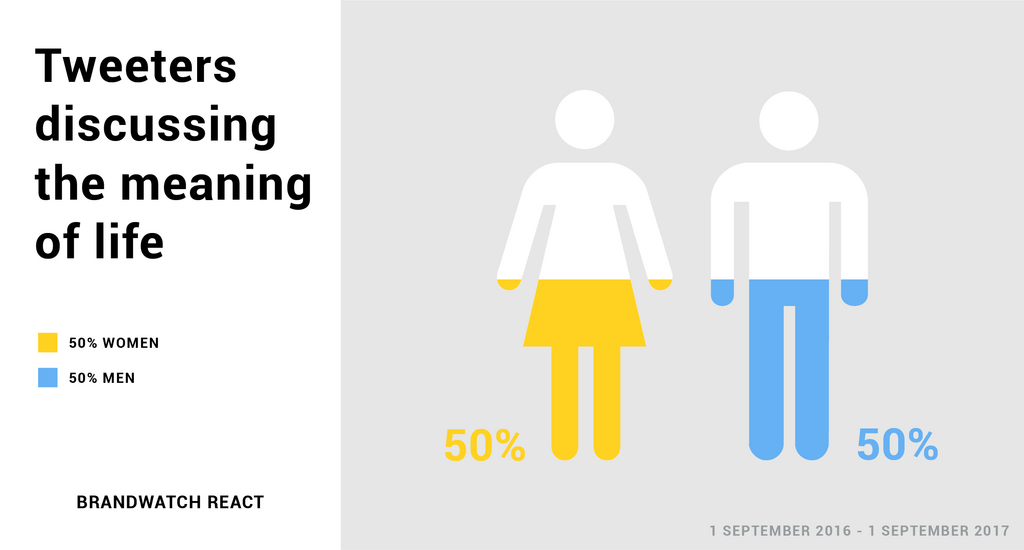 Male and female authors had a near even share of mentions regarding the topic, suggesting we’re all as worried as each other.

While men’s searches tended to be more external as they looked for answers from celebrities and television shows, with topics including Stephen Fry and ‘Rick and Morty’. Female conversation was more introverted as ‘contemplated the meaning of life’ emerged as prominent within feminine discussion.

The rather morbid subject of death appeared as a key topic within male conversation, as authors discussed the meaning of life in the context of dying. A fear of being unfulfilled emerged within this subject as male authors emphasized the importance of making sure you’ve achieved everything you wanted before your final moments. This also highlights a secular vein that emerged from male conversation.

Is it that time again? The chart shows that Monday and Sunday were the most common days to discuss the meaning of life and we also found that early evening was the most popular timeframe for conversation. This could be people questioning their life’s purpose as tomorrows work day bears down upon them after a rather heavy weekend.

We can see there is a rather random spike in conversation at 4am (may or may not be sleep deprivation!) and I myself appear to be an outlier, with early mornings seeing the least conversation..

So to summarise, happiness is the meaning of life, I’m a bit of a nihilist, men seem more afraid of death than women and 7pm on a Sunday is the perfect time to have an existential crisis. Not everyone will be so happy with my digital quest though. Allow me to leave you with this quote from esteemed philosopher, Trey Songz;

Everybody looking for the meaning of life through a cell phone screen. Logic