We’re More Misinformed Than Ever: Looking at The Prevalence of Fake News

The Brandwatch React team takes a look at some of the recent examples of widespread misinformation and what makes fake news so successful on social media.

The internet is an open door to a whole world of information, but the lines between what is true and what is false are getting more blurred every day.

Without getting too philosophical about the nature of truth and falsehood, we like to think that our viewpoints on the world are backed up by the facts. However, the way our access to the news is currently mediated means we are more susceptible than ever to being misinformed.

According to research, 62% of American adults get their news on social media, a relentless and incredibly varied source of statements with an even more varied scale of legitimacy.

As our news sources have become more diverse and their distribution democratized no one organization or group of organizations has a monopoly on the truth.

The ways our timelines and newsfeeds operate mean reality is being presented in very different ways to each individual – the Wall Street Journal’s Blue Feed, Red Feed goes a long way to demonstrate the different ways Facebook users are presented with information – and there’s no shortage of misinformation being spread far and wide across social on top of that.

Brandwatch React decided to take a closer look at the spread of misinformation and what it means for readers.

Fake or misrepresentative news is nothing new – from newspapers with heavy political leanings to journalistic malpractice to H.G. Wells’ War of the Worlds and scripted “reality” television, we’re no strangers to being presented with nuggets of information that have little grounding in the real world.

The main problem is that social media has accelerated misinformation to a whole new level. Here are three examples in a whole sea of ill-informed stories and outright lies.

The story of Marina Joyce, a British YouTuber who fans recently suspected had been kidnapped, is a good example of how the internet can get things hysterically wrong.

After she posted a video where she was interpreted to be acting strangely, her fans stayed up throughout the night doing detective work as suspicions circulated that all sorts of things could be wrong, including that she could have been kidnapped by ISIS. While allegations that she was kidnapped by Islamic State were far less widespread than the mainstream media seemed to suggest (commenters were ridiculed for suggesting it), many of the less extreme explanations for Joyce’s behavior were believed to be true.

After an influx of concerned contact from her fans, the police visited her only to find that she was actually fine.

On a more local level, here’s an example of a fake news story that sent the locals of Brighton & Hove (England) into a flurry of excitement as it announced that Katy Perry was moving to the area.

A fabricated quote from the star and a half convincing news site layout was enough to get a bunch of people excited that the pop princess was moving in, though the quote was incredibly similar to ones used by fake Justin Timberlake in this debunking article.

It’s pretty harmless but demonstrates well how a piece of interest-piquing information can target a local community and spread fast throughout it.

Misinformation doesn’t just spread fast in niche fandoms and tight-knit towns and cities. Recently #SaveTwitter trended as tweeters believed it was being shut down. 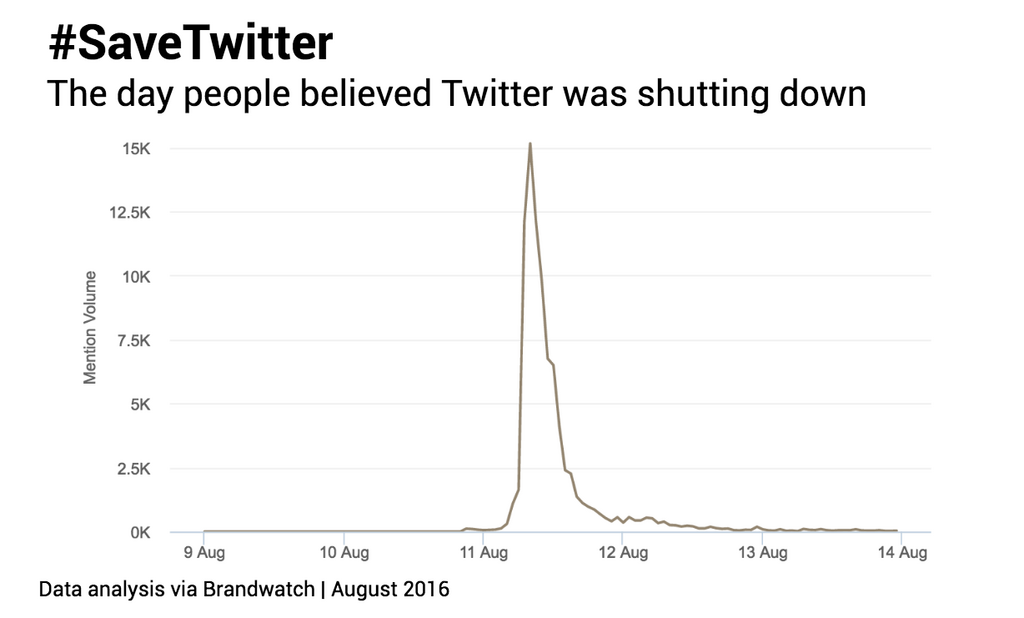 Not everyone tweeting the hashtag took it seriously (many took it as an opportunity to laugh at the #savemarinajoyce phenomenon) but a lot of weight was thrown behind one YouTuber who jumped on the hashtag and claimed it was because of abuse directed at him that the site would be turned off in 2017.

As Conor Cawley points out, there are a couple of reasons why the hashtag was so believable which is probably why it was shared so widely but, again, all of the rumors were untrue.

It’s not easy to make anything go viral but there are certainly some things that fake news stories have in common that make them successful. Firstly, they’re never boring.

They appeal to our emotions

This fake news report from the National Report played into palpable fears over the ebola virus two years ago when it claimed that a family in Texas had tested positively. It was shared hundreds of thousands of times and was lamented by fake news story debunking site Emergent, but the damage was already done.

Sensational headlines and nerve-touching statements that are relevant to the places and people we hold dear, the things that we hate or fear are incredibly clickable and generate emotionally charged reactions from readers who don’t realize they’re fake.

We’re storytelling creatures, and if it’s something current and looks like a big story we can be overcome with the need to share.

There’s an air of legitimacy

Sensible people don’t share things that are obviously fake. Like with the #savetwitter hashtag, there were a number of elements (a stagnating user base and widespread publicity over their financial difficulties and abilities to combat abuse) that made it easier to believe.

Seeing that 500k people have already tweeted the hashtag or multiple friends sharing the story on your feed (which can feel like everyone is talking about it or believes it) can definitely add a sense of currency and legitimacy, while news organizations themselves are guilty of using unconfirmed details in their content (see the story of the man who has “died” several times in terrorist attacks as his photograph was circulated on social media).

My brother Alfonso was in that area of Nice when the attack happened ,please help RT to spreading #Niza #nice pic.twitter.com/GSEBFZ1X2l

Meanwhile, fake news sites are fairly savvy about presenting themselves as legitimate sources.

While there are often tell-tale signs, mirroring the layout and style of legitimate news websites and limiting indication that the article isn’t truthful (a small tag at the bottom explaining it’s satire, for example) is enough to convince many that they’re telling the truth.

They play into a worldview

Similar to appealing to our emotions, stories that confirm our worldview are often ones we are willing to share most.

While our social circles are increasingly being referred to as “echo chambers” in which we share links with like-minded individuals that affirm each others’ beliefs, the absence of fact isn’t always a problem.

Truth is to false as up-voted is to down-voted

As Guardian Editor Katharine Viner writes, “It can become very difficult for anyone to tell the differences between facts that are true and ‘facts’ that are false.”

She cites the example of UK Prime Minister David Cameron and the ‘revelation’ that he had engaged in indecent acts with the head of a dead pig. It turned out that the story had very little evidence, but that didn’t stop the scandal confirming a lot of widely held beliefs about the unsavory but secretive antics of the infamous Bullingdon Club and the whole thing exploded across the national press and social media.

She goes on to discuss the prevalence of misinformation in the rhetoric of politicians surrounding Brexit, something that the Leave campaign’s biggest financial donor called “taking an American-style media approach… What they said early on was ‘facts don’t work’ and that’s it. The remain campaign featured fact, fact, fact, fact, fact. It just doesn’t work. You have got to connect with people emotionally. It’s the Trump success.”

As more pressure is put on the mainstream press to compete with the fast-paced digital world and misinformation begins to slip more and more through the net and the difficulty in quelling damaging fake news stories before they spread, a relationship with the truth that grows increasingly similar to Donald Trump’s could mean scary things for audiences.