React: Who Threw The Best Party? RNC vs DNC in Social Data

July was a historic month for American politics with two explosive conventions. Brandwatch takes a look at the social data to see which had a bigger impact.

July was a historic month for American politics, with two explosive conventions.

They saw the nomination of Hillary Clinton and Donald Trump as the official nominees of the Democratic and Republican parties in the Presidential race, as well as an incredible amount of drama both online and offline.

We updated our data this week and, looking at raw mentions of the conventions as well as related hashtags, we found the DNC was generating a lot more online mentions than the RNC did the week previously. 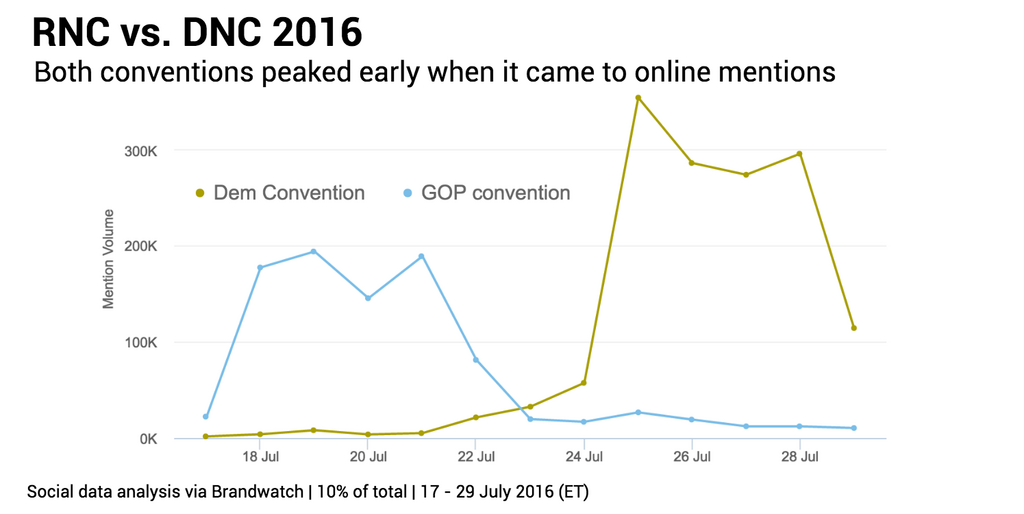 Both conventions peaked early in terms of mentions across a full day, though that wasn’t necessarily reflected when you break it down by hour.

It’s here that you can see the big moments coming to life on social.

It was the final night of the GOP convention that got the biggest mention spike, while the first night of the DNC was huge – bringing in 800k mentions in an hour.

DNC spikes also tended to be a little later – around the 11pm mark – while all of the GOP peaks occurred at 10pm.

Both conventions had moments that lit social on fire as well as long-running topics. 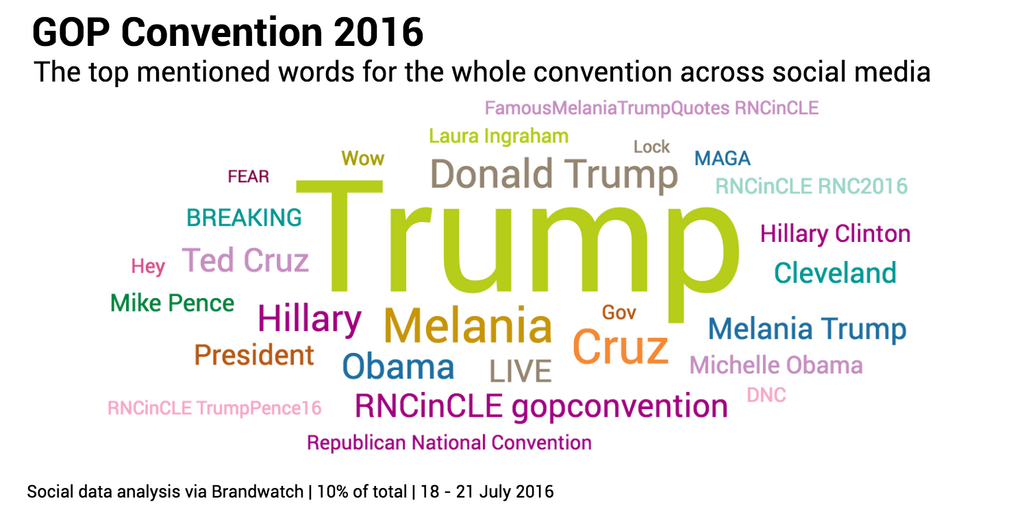 Meanwhile, Melania Trump’s speech was an enormous talking point during the week and it didn’t take long for the plagiarism allegations to start to circulate.

#FamousMelaniaTrumpQuotes trended as tweeters ridiculed her speech by attributing famous quotes like “I have a dream” to her. 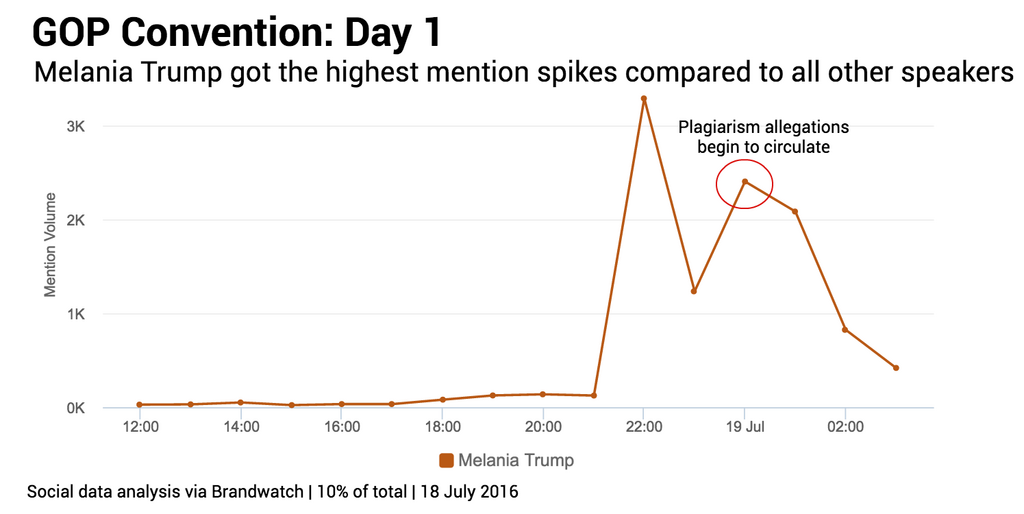 The top mentioned words and phrases from the DNC featured the #DemExit movement which made up a huge part of the conversation.

Disillusioned Sanders supporters were seen to cause a lot of disruption at the convention, with a lot of booing and heckling on day one. 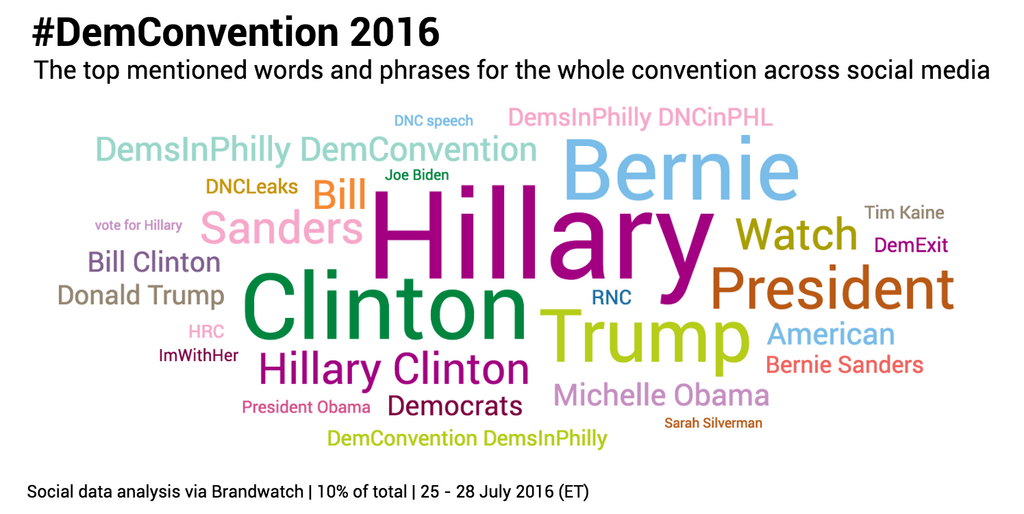 The headline speakers of the week were at the center of the topic cloud and we mapped their mentions as they spoke throughout the convention.

It’s interesting to see RNC and DNC feature in their opposing topic clouds – they certainly weren’t events that occurred in isolation of each other.

Clinton and Trump both accepted their parties’ nominations during their respective conventions, but they both made huge splashes in their competing conversations too.

Driven by sassy Twitter remarks from both candidates as well as the insults being thrown around by supporters online, they both got huge mentions related to each convention.

Not according to your anti-woman, anti-LGBT, anti-immigrant @GOP platform. #RNCinCLE https://t.co/I2W1cvyrrQ

Not one American flag on the massive stage at the Democratic National Convention until people started complaining-then a small one. Pathetic

Looking at how the two nominees featured in each convention’s separate conversations, they both got around 65% of the share of voice for their own convention. 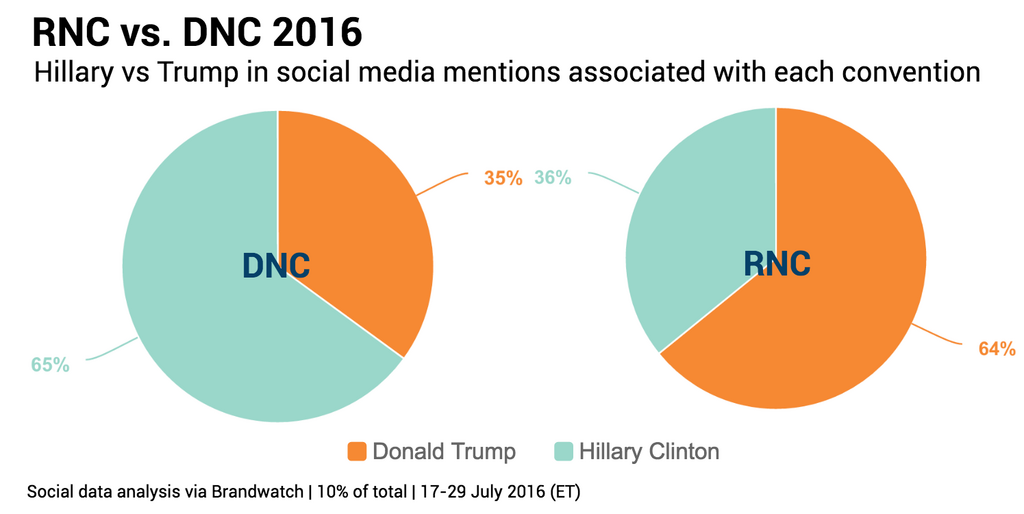