Spying on People Dressing Up: The Most Popular Halloween Costumes

So it’s that time of year again, the only night of the year where you can dip your head into a bucket of water to retrieve an apple with no questions asked.

We’re sure you’ll all be carving pumpkins and eating toffee apples before the day is out, but what about fancy dress? Are you planning on getting out the face paint and the fake noses?

Halloween often results in many questionable costumes that don’t exactly fit in with the ‘scary’ theme.

We all know that Halloween is supposed to be spooky but, as Lindsay Lohan put so eloquently in Mean Girls:

“In the regular world, Halloween is when children dress up in costumes and beg for candy. In Girl World, Halloween is the one night a year when a girl can dress like a total slut and no other girls can say anything about it.”

However, there are still those out there who stick to the traditional outfits of zombies, witches and spiders to bring some sense of horror to the occasion. So what are the most popular Halloween costumes?

We took a look at online conversation about Halloween to see what terrifying creatures people are intending to dress up as in the run up to this evening. 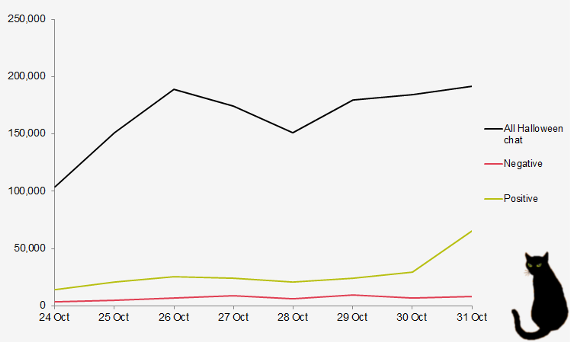 People are certainly getting excited about Halloween in general, with over a million mentions of Halloween on social media in the past seven days, with the mood generally more positive than negative.

There was a peak in Halloween mentions last Friday, due to those gearing up for weekend celebrations, and there have already been almost 200,000 mentions today despite the day not yet being over!

We can see that people specifically discussing their costume choices seem to be doing so in a positive tone, revealing that everybody loves an excuse for a good old dress up. 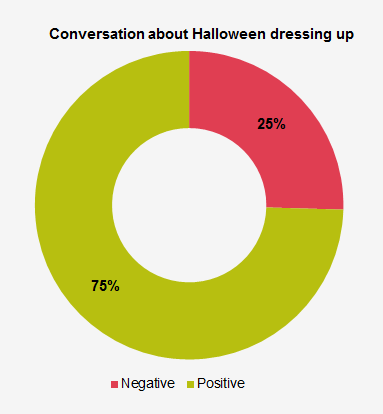 So, what are people intending to wear? We categorised conversation discussing costume choices according to some popular genres of costume. 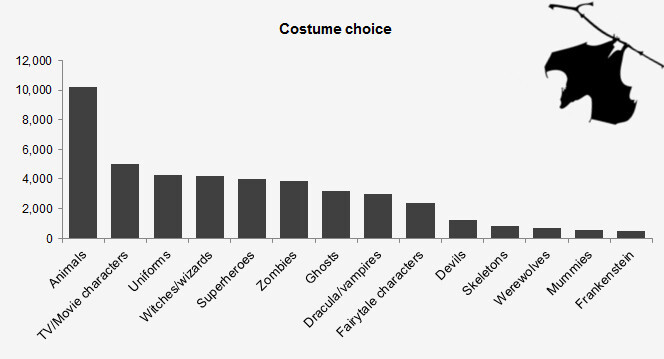 When it comes to what people are wearing, it seems that animals (cats, dogs, bats, tigers … whatever takes your fancy) are one of the most popular choices for costumes, although not everyone approves of this: 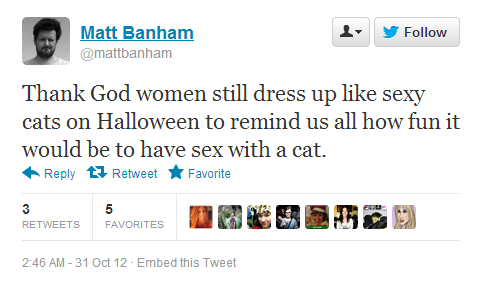 ‘Spooky’ TV and movie characters such as Daleks, Harry Potter or Freddy Krueger are also proving to be a popular choice, along with the slightly-less-spooky uniforms (maids, doctors, nurses … that kind of thing).

When we compare the costume intentions of tweeters from the US and UK, we see very similar choices when it comes to Halloween outfits, though our US friends seem to have slightly more of a penchant for animals and uniforms than us, whilst we are more likely to dress up at TV/movie character or zombies than they are. 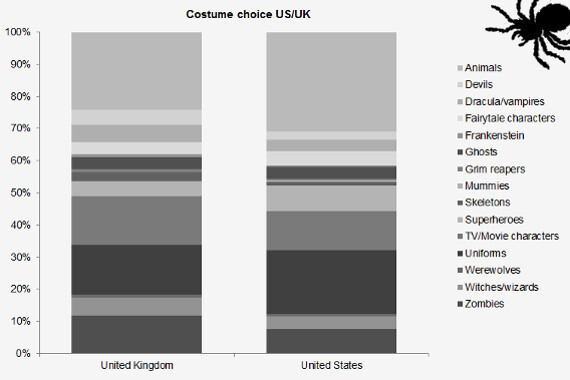 We’re sure you will have a fantastic time whatever you decide to dress up as this evening. Want to send us your spooky pics? Tweet us at @brandwatch.

Lastly, to entertain you, take a look at these disgusting-looking (but yummy tasting, we’re sure) Halloween cakes.