Super Bowl LII Ads: Which Brands Rose to the Top of Online Conversation?

The Brandwatch React team works to identify which of the many Super Bowl LII Ads did best on social media. Which brands created the most buzz? Find out here.

The Philadelphia Eagles may have stomped on the New England Patriots, but which of the Super Bowl LII ads triumphed in getting the most people talking?

The Brandwatch React team have long been fans of crunching Super Bowl data, and this year is no different.

We found 4.2 million mentions of the Super Bowl the day of the game and this year we decided to dive deep into the ad data. Stick around to the end to see how a certain announcement from Kylie Jenner did amid the Super Bowl hype, too.

Considering the number of ads shown throughout the Super Bowl, getting people excited about your own is no easy feat. And with millions being spent on the slots – let alone the ads themselves – the stakes are high.

One way to measure the success of a Super Bowl ad (or any ad for that matter) is measuring how much excitement it gains online. We did just that.

We measured ads that appeared throughout the game and broke them down into two lists: Firstly, those that created the biggest spikes in a single minute, and secondly the most mentioned overall.

Measuring spikes can give you a good idea of which ads created the strongest immediate reaction.

Congratulations to Doritos and Mountain Dew.

The Diet Coke and T-Mobile ads also did very well to create mention spikes in excess of 1.5k in a single minute.

Of course, mention spikes don’t necessarily mean the reaction is sustained. People might be shocked by your advert and express that emotion, but never speak of it again. Arguably a better measure of success is looking at how people continue to talk about your ad. Do they keep discussing it after it’s shown? Do they share it with their friends and get them talking about it?

Not all of the brands with the biggest spikes made it into the top 5 most mentioned ads.

In fact, it was Pepsi that got the most mentions. 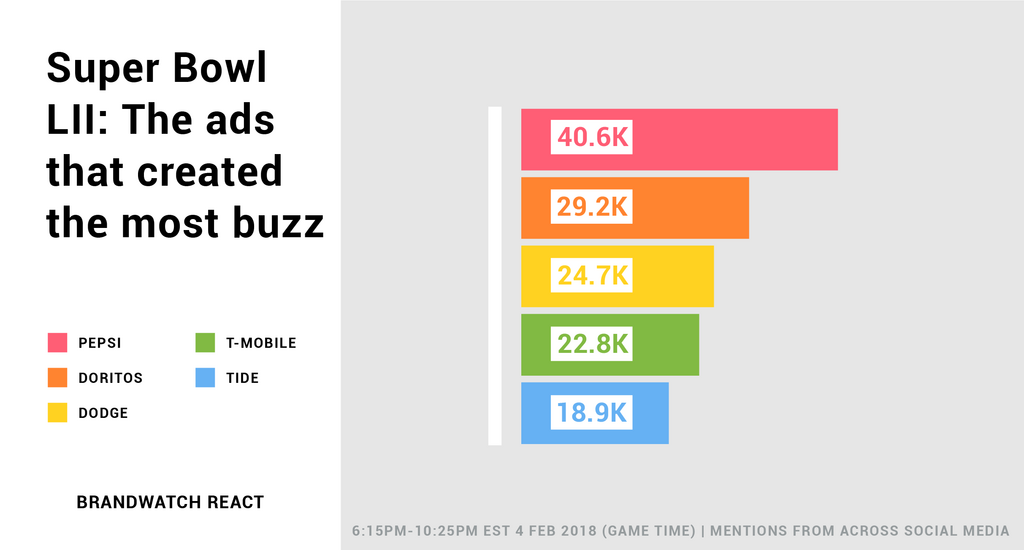 Pepsi accounted for 14% of all brand mentions.

Doritos and Dodge accounted for 9% a piece, as well.

Here’s the biggest ad. Remember, Pepsi, a Super Bowl ad might cost millions but a share on the Brandwatch blog is priceless.

Last time we mentioned the words Jenner and Pepsi in a blog post the tone wasn’t so positive – but let’s move on from ads to a very different piece of Super Bowl day research.

In a twist of events for entertainment journalists who thought they were going to spend the day eating junk food and watching the game, Kylie Jenner released a surprise video in which she revealed “a glimpse of the last nine months.”

here’s a little glimpse of the last 9 months.. ♥️ https://t.co/dkRKkcxwsS

The announcement garnered an enormous social media response – especially since no one really knew what was going on with the celebrity for the last nine months.

We found an astonishing 700k mentions of Jenner on 4 Feb (Super Bowl day) leading us naturally to checking how her announcement looked in relation to a full day of Super Bowl hype. 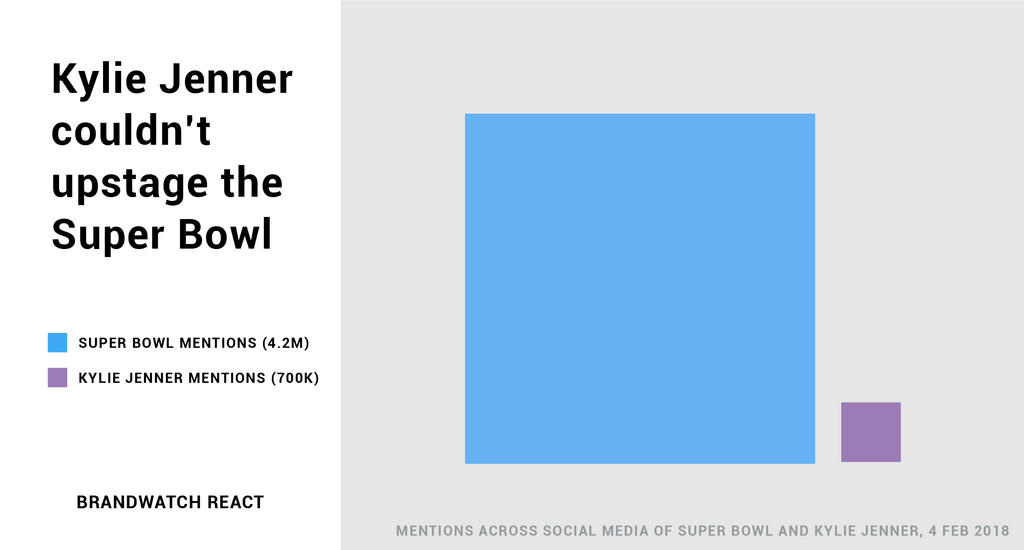 Jenner’s big announcement didn’t quite upstage the Super Bowl, although 17% of 4.2 million mentions isn’t bad – she certainly made a mark.